Russia's shrewd policy moves in the Middle East have allowed it to make inroads in unexpected places, such as Egypt and Bahrain. 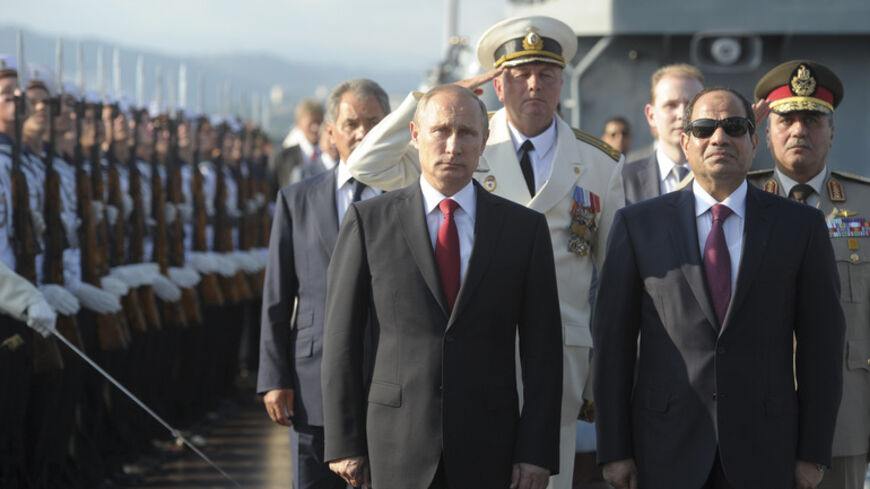 The turbulent dynamics of the Middle East make responsible stakeholders take proactive yet cautious stances. Russian policies in the Middle East have recently attracted attention, as Moscow has participated in nearly every significant regional initiative. The boost in this activity comes partly because sanctions have imposed certain limits on Russia's policies toward Europe. Moscow is thus compelled to seek better political and economic opportunities in other important regions where it has historically had sound influence.

The philosophy behind Russia's new Middle East policy is made up of a mixture of tactics. Policymakers definitely do not want to get dragged down into complicated political and security puzzles — a bitter lesson learned from the Soviet experience. But while Moscow keeps a high public profile in three prime areas — the Iranian P5+1 talks, the Israeli-Palestinian “Big Four” negotiations and the Syrian track — its activity beyond the institutional formats is less declaratory. Therefore, it is essential for Moscow to work actively behind the scenes with critical regional powers and to create potential leverage to balance major external forces, primarily the United States.

Indeed, Russia is no stranger to Middle Eastern affairs. It has a shrewd grasp on the regional nuances, as well as serious academic and expert schools dedicated to area studies. Although not immune to its own miscalculations, it has proved skillful in building on American fallacies. To a certain extent, cooperation with Egypt and Bahrain exemplifies this trend.

In recent years, Moscow’s relations with two of America's 15 major non-NATO allies have strengthened. With Cairo, this is nothing new — arms and ammunitions sales have amounted to some $2 billion, and mutually encouraging rhetoric has helped forge personal ties between Vladimir Putin and Abdel Fattah al-Sisi, who visited Moscow in August 2014 on his first official foreign visit. Earlier in February, after seizing power in a coup, Sisi traveled to Russia as his first choice in foreign destinations — a clear message to US authorities that Egypt has “places to go” besides Washington.

But relations with Manama — a longtime stalwart American ally and home to the US Navy's 5th Fleet — are especially interesting to watch. Under the current economic constraints, Russia is considering new sources of income and therefore views Bahrain as a key partner in the Gulf. The bilateral agenda is dominated by the energy, investment and financial sectors. In late October, after Putin and King Hamad bin Isa Al Khalifa met in Sochi, the two states established their first-ever direct air connection, with Bahrain Gulf Air being the prime carrier despite the threat that it might fall under US-led anctions against Russia.

It would be premature to presume that Russia is eating America's lunch in the Middle East, yet the public relations component is important here as well. Since Russia can’t boast huge popularity in the Gulf, expanding its economic and information presence in the region plays Moscow’s card.

Above all, there’s some domestic fine print for Russia in all of this. The overwhelming majority of Russian Muslims are Sunnis, whereas Moscow’s much-buzzed cooperation with Iran and Syria makes observers assess Russian policies in the Middle East as “pro-Shiite.” Whether it’s a correct description or a failure to view Russia’s Middle East strategy from outside the box, the Kremlin has to take the issue into account, as some Muslim leaders in Russia have expressed concern. Therefore, working along with Egypt and the Sunni leadership of Bahrain and Palestine — whose leader Mahmoud Abbas visited Russia’s North Caucasus twice — not only expands Russian political and economic horizons but also helps consolidate support for the country's leadership from its own Muslim constituency.

In a nutshell, although Russian activities in the Middle East are oriented toward specific countries, they aim for larger systemic effects from its policy in the region. In dealing with such a complicated region, there is definitely no elevator to success; one has to take the stairs. In the great power rivalry that is echoing in the Middle East, the more patient and cautious you are, the better your odds for policy progress.