The Lebanese army's victory in Tripoli trampled the Islamic State's plan to gather all terrorist cells in Lebanon under its umbrella, establish a caliphate and gain access to the Mediterranean. 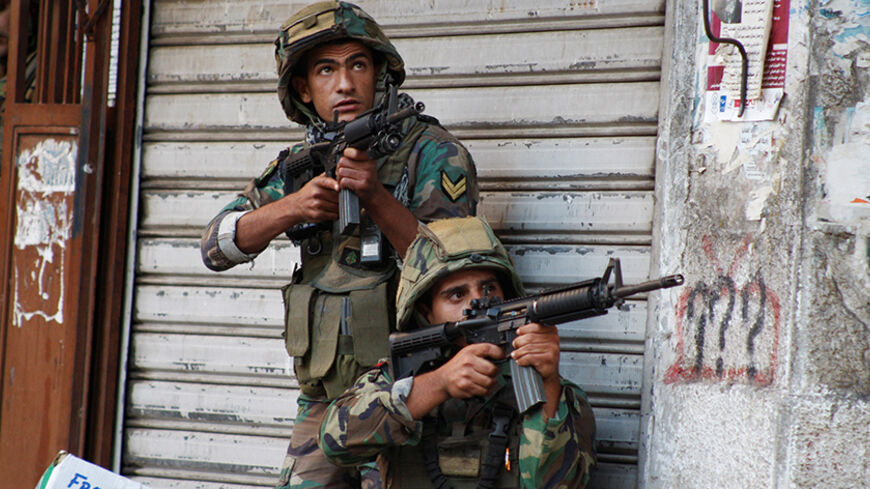 BEIRUT — The Lebanese army dealt a painful blow to the Islamic State’s (IS) plan in Lebanon through the battle it waged in Tripoli. This happened in the wake of the attack of armed groups on the army to retaliate against the arrest of Ahmad Salim Mikati in the town of Asoun, in the northern district of Dannieh, on Oct. 23.

It appears that Mikati is affiliated with IS, and that he formed cells in Lebanon to carry out terrorist acts. He allegedly also recruited soldiers after they escaped from the army, and the videos in which they declared their defection from the army were taped in his apartment.

Why is the battle that the army waged against terrorism in Tripoli important?

Mikati admitted he was seeking to occupy several villages in Dannieh to declare it a safe region for militants and to raise IS flags and pledge allegiance to Abu Bakr al-Baghdadi, the self-proclaimed IS caliph. This would make Dannieh a refuge for militants and defected soldiers and complete the first step toward implementing the plan to connect Qalamoun to the Lebanese coast.

Do the recent events in Tripoli constitute the first round or the decisive battle?

The Lebanese state is strongly and effectively present for the first time in the region of Tripoli, on both military and security levels, since the outbreak of the 1975 civil war — an important point — according to army Cmdr. Jean Kahwaji. Moreover, military sources who are informed about the ground operations witnessed that Mikati’s arrest and the latest battle in Tripoli helped the Lebanese army abort the IS project in Lebanon, through the pre-emptive operation that was executed before the terrorists could implement their plan. This is reminiscent of the army’s battle in Arsal, which involved the arrest of Syrian rebel Cmdr. Imad Ahmad Jomaa in August. The army shielded Lebanon from a similar project of establishing an Islamic state on its territories.

The battle in Tripoli allowed the army to disband dormant cells deployed across the northern region, especially in Akkar that would have constituted a starting point for terrorists to join IS militants in Tripoli. Some believed that Lebanon would be the stage for another Iraqi scenario, where IS' control of Mosul led all the cells in the neighboring regions to pledge their allegiance to the organization. This widened the scope of IS deployment without the need for any battles. The arrests in Akkar showed that these groups, mainly the Hablass and Ghali Haddara cells, are widely spread in villages. Moreover, the number of arrests in the north has exceeded 150.

The same military sources indicated that Mikati’s arrest was important because he was a valuable prey. He is one of the main pawns in IS’ plans in Lebanon, and he is considered the mastermind behind IS’ control over the north. Moreover, his group is one of the most active in Tripoli.

The sources told Al-Monitor that the investigations with Mikati revealed his connection to several terrorists outside Lebanese territories, including Abu Ayoub al-Iraqi who worked with him to establish the IS cell in Tripoli by uniting the militant groups in the city. Mikati led around 10 militant groups that included 150 armed terrorists deployed in several regions in the north.

Mikati was planning for IS to gain in Lebanon what it couldn’t in Iraq and Syria — access to the sea.

If the Tripoli project had succeeded, it would have facilitated the establishment of the IS emirate in Lebanon, after the groups in north Lebanon would have proven their ability to provide stability and strategic services for IS militants, mainly through the sea access and the benefits resulting from having such a vital facility. These benefits include providing IS, which has been selling oil, with supplies and allowing the entry of weapons through this outlet. Moreover, it would ensure the ability of militants to commute to Syria through an alternative route rather than Turkey, if Turkey succumbs to international pressure and becomes a partner in fighting IS as well as restricts the militants’ movement to Syria through its crossings.

The sources revealed that the break-ins in Tripoli resulted in finding more than 50 ready-to-use bombs, each weighing around 10 kilograms (22 pounds), in addition to three booby-trapped cars and an explosives’ factory. The sources wondered what goal might stand behind possession of all these confiscated properties, other than launching attacks on other regions to control them.

The Arsal-Akkar-Tripoli trilogy summarizes the IS plan, according to the sources. The battle in Tripoli resulted in foiling the last attempt to establish a caliphate with access to the sea, at least in the short run. With these developments, armed groups will undoubtedly try to gather themselves, and IS will try to revive the remnants of terrorist cells and find new recruits for its project. Meanwhile, the army is focusing on disbanding and annihilating these cells.

The terrorist group of IS tried to hit Lebanon through Arsal in the Bekaa Valley, but failed; then it moved north to Tripoli, but also failed. But the war is not over yet, and the threats will persist as long as IS exists and as long as the international alliance to annihilate it keeps failing. While the Lebanese army has firmly proved its fight against terrorism throughout Lebanese territory to alienate this strange phenomenon, the question remains: Where will the next battle be?