The Lebanese army has implemented a security plan in the predominantly Shiite areas in the northern Bekaa Valley, amid increasing kidnappings, thefts and killings. 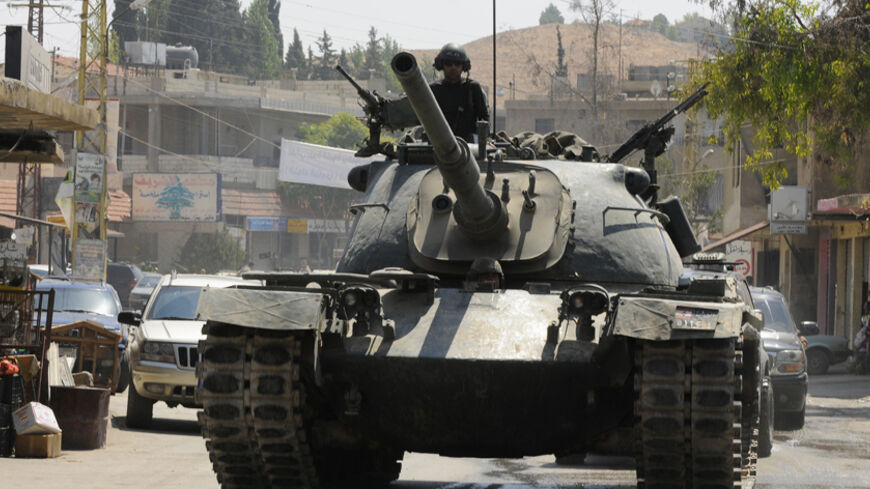 Lebanese army soldiers on a tank advance toward the Sunni Muslim border town of Arsal, in the eastern Bekaa Valley, Aug. 7, 2014. - REUTERS/Hassan Abdallah

BEIRUT, Lebanon — Brital, the Sharawna neighborhood in Baalbek and Dar El Ouassaa are Lebanese localities in the northern Bekaa Valley that have always been classified as being beyond the state’s authority, and known for kidnappings, thefts — especially car thefts — and drug trafficking. These predominantly Shiite areas are currently the subjects of a security operation, which was imposed by the Lebanese army in the entire northern Bekaa Valley on Nov. 15, including strict military procedures to hunt down wanted people, in addition to a series of raids. As the operation has started, the army is now engaged in two wars in the Bekaa Valley: The first is against terrorism, which began with the outbreak of the Syrian war in March 2011 and its repercussions on Lebanon, most recently being the events in Arsal on Aug. 2, and the second against outlaws and those who are wanted by the judiciary. So, what is the importance and background of this plan?

Security sources told Al-Monitor that this operation came into being following the imposition of a security plan in Tripoli and the political, religious and popular calls for the plan to cover all of Lebanon. It also followed a series of criticism toward security forces, who were accused of limiting their operations to the Sunni areas and of applying a double standard. The Sunni street, which got to the point where it felt aggrieved, has sympathized with these positions.

Lately, kidnappings have soared in the specified areas, including those for ransom and counterkidnappings, which escalated tensions. The best evidence was the kidnapping of Ayman Sawan in Saadnayel, which has taken on a sectarian character and was countered by the kidnapping of seven people. This could have gravely escalated the situation had it not been for the army’s intervention to liberate him. Later, it was found that the reasons behind the kidnapping were financial.

According to the same sources, security forces have reported that car thefts, shootings and infringement on citizens have remarkably increased. They also indicated that the recent investigations into the bombings, which took place in Lebanon, revealed that most of the car bombs were sold by people in the northern Bekaa Valley to parties inside Syria, where they were rigged.

According to media reports, the residents have been waiting for the security operation in the Bekaa Valley, particularly since the absence of the state in this area has aggravated the situation and activated all kinds of crimes. Some villages have even been branded by the authorities and in public opinion as being the stronghold of gangs and a storage area for stolen cars, especially Brital. Some have even confessed to stealing cars, and forcing their owners to pay a ransom to get them back.

What makes the situation more complicated is that tribal authority has replaced the official authority in resolving popular matters, and that the rule of revenge has prevailed over this Shiite-majority area.

The sources told Al-Monitor that there were more than 40,000 arrest warrants for a variety of offenses, namely drug planting and trafficking, shootings, thefts, fighting with security forces, kidnappings and armed robberies. Under the Syrian presence in Lebanon before 2005, this number had increased given the Syrian troops’ unwillingness to clash with the wanted people, to prevent the northern Bekaa Valley from turning into a region of tension that would adversely affect the deployment of Syrian forces inside Lebanon. This was added to the converged interests of influential parties from both sides. The wanted people took advantage of Syrian disregard, which activated the cultivation and smuggling of drugs from and into Syria, as well as other crimes.

What makes the situation even more complicated is that whenever there is an attempt to arrest them, wanted people escape to the barren land of Baalbek-Hermel, where they seek cover within their families and clans. This situation has always posed the risk of a bloody confrontation between the clans and military forces, particularly since large quantities of medium and heavy weapons are in the area, and used in disputes between families.

In light of this reality, it was necessary to take into consideration all the peculiarities of this area when implementing any security plan. It was also necessary that the army receive a strong political cover to succeed in its mission, and avoid that the area and its people turn against it. This support came to light through several steps, most notably a visit made by a Hezbollah parliamentary delegation to the commander in chief of the armed forces, Jean Kahwaji, days after the operation started. Parliament Speaker Nabih Berri also affirmed his full support for the security operation in the Bekaa Valley, saying, “This plan was needed a long time ago, and our people in the Bekaa Valley have been harmed by kidnappings, thefts and other acts at the hands of some thugs. … The army has absolute power to complete this comprehensive plan. What has preceded this plan is something, and what will follow it is another thing.”

Hours after the security plan was imposed, a crime was committed by a group of wanted people. While they were fleeing the army’s raids, they fired at the house of the Christian Fakhry family in the town of Btedaai (in Deir al-Ahmar). As a result, a woman was killed, her son was injured and her husband died of his injuries. This crime — which likely would have led to sectarian strife had it not been for the efforts deployed to contain it — has weighed on the security operation and left an impact on the process that it is supposed to follow.

The security operation in the northern Bekaa Valley is still continuing. Yet, its success depends on several factors, most notably the continuation of the political and popular support for the army’s measures, and the families and clans’ insistence on the disavowal of security violators, as security forces continue to hunt down wanted people until they are arrested, and until the gang members and security violators' networks fall into the hands of the judiciary and the rule of law.