The police shooting of a young Arab resident of Kafr Kana proves that 14 years after the killing of protesters in the October 2000 riot police still discriminate against Arab citizens and treat them like enemies. 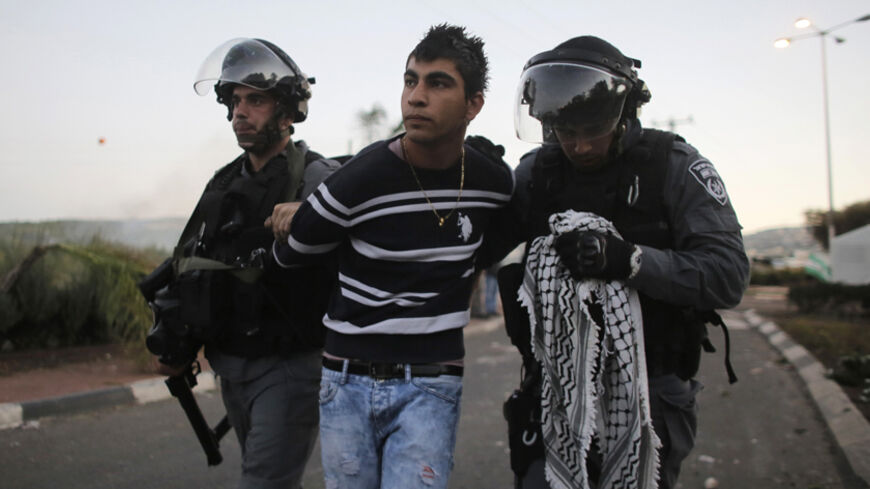 Israeli policemen detain an Arab youth during clashes at the entrance to the town of Kafr Kana, north of Israel, Nov. 8, 2014. - REUTERS/Ammar Awad

Here is a short but fascinating lesson in Israeli-style democracy, equality and coexistence. Footage from a CCTV security camera documents the incident in the Arab Galilee village of Kafr Kana on Nov. 7, in which Israeli police killed a young Arab man. Now, imagine that the incident had taken place in the settlement of Yitzhar. Imagine that the 22-year-old man who banged on the windows of the police cruiser and then started backing away was not named Khair Hamdan, but rather Nir Hemed; that he was one of those known as “hilltop youth” who do not recognize government authority and who regularly harass the security forces. How would Prime Minister Benjamin Netanyahu have reacted to Nir being shot to death in the back by the police? Would Netanyahu have pledged to examine the option of revoking the citizenship of members of the fanatic Jewish sect, as he did with the Palestinians who were involved in rioting? Would Economy and Trade Minister Naftali Bennett have praised the policemen who killed Nir and rushed to their defense, before the Justice Ministry's police investigations unit had even decided whether shooting the young man in the back was justified or not?

The reactions of Arab members of the Knesset were, of course, completely different. Knesset member Ahmad Tibi claimed that Hamdan’s killing was typical of police attitudes toward the Arab public as “enemies who must be destroyed.” Tibi was not being original. An inquiry commission appointed by the government exactly 14 years before the fatal incident in Kafr Kana determined that “the police must imbue its policemen with the understanding that the Arab public at large is not their enemy, and it must not be treated as an enemy.”

The commission, headed by retired Supreme Court Justice Theodore Or, investigated the events of October 2000, in which 13 Arab Israelis were killed by live police fire. In 2003, its members recommended “imbuing all police echelons with the importance of balanced and moderate conduct in relations with the Arab sector.”

The footage of the incident in Kafr Kana, and its severe result, do not point to “balanced and moderate conduct” by police in their relations with Arabs. According to a publication issued last month by the Mossawa Center for the rights of Israel’s Arab citizens, Hamdan is the 49th Arab-Israeli shot since the October 2000 riots by police, soldiers or Jewish citizens. Only two incidents ended with policemen being convicted and sentenced to very short jail terms — one receiving six months, the other 30 months. This was preceded by the decision of then-Attorney General Menachem Mazuz to dismiss complaints against all the policemen suspected in the killing of the 13 Arabs in the protests of 2000. The Israel Democracy Institute, which examined the evidence in three central cases, determined that the decision not to pursue them further “for lack of proof” was not justified and the Justice Ministry's police investigation unit and the state prosecutor’s office failed to see the investigation through to its end.

For many in the Arab sector, the events of October 2000 and the decision to dismiss the complaints constitute a watershed moment in their attitude toward Israel. Mass arrests of Arab Israelis, including “preventive detention,” along with group trials and the use of violence and undercover agents to quash protests against the (summer) war in Gaza, have made it abundantly clear that the police have not truly understood that the Arab public is not an enemy. The trigger-happy policemen, like the young “stone happy” Arabs, get their inspiration from the very top.

The Hebrew cop and the Arab youth know that there are ministers in the Netanyahu Cabinet, among them Foreign Minister Avigdor Liberman and Internal Security Minister Yitzhak Aharonovich, who is in charge of the police, whose party clearly calls for repealing the Israeli citizenship of Arab citizens. They read in the paper that the Knesset decided to punish Arabs who mark the Nakba memorial day. They watched on television the debate in the Knesset, where it was decided to suspend Knesset member Haneen Zoabi for a lengthy period for insulting a policeman, while Jewish Knesset members stroll around uninterrupted on the Temple Mount and risk setting the country on fire. They heard that Knesset members are plotting to erase the Arab language from official state documents.

One could hardly expect this government to adopt the Or Commission’s recommendations and find ways to strengthen Arab citizens’ sense of belonging to the state by adding events and official symbols with which they, too, can identify. The supposedly obvious statement that the state is not just Jewish but also democratic, and that the principle of equality and the ban on discrimination apply to all its citizens — is apparently unacceptable to many of the 19th Knesset’s members. But, as the Or Commission noted, “The state and its successive governments have failed to deal deeply and extensively with the difficult problems posed by the existence of a large Arab minority within the Jewish state.”

The neglect and deprivation, especially as they pertain to the allocation of state resources, as well as in law enforcement, provide the fuel for nationalistic and religious radicals in the Arab sector who regard Israel as an enemy. The fuel is borne aloft by natural feelings of solidarity on the part of Arab Israelis with their Palestinian brothers in the territories, who have lost hope of shaking off the shackles of the occupation. Just one irresponsible policeman, who gets the automatic backing of irresponsible leaders, is enough to ignite a major conflagration. Fires do not discriminate on the basis of religion or nationality. They do not respect any boundaries. This particular fire will burn us all alive.