Netanyahu captains Israel into the doldrums

Prime Minister Benjamin Netanyahu boasted about the uniqueness of Israeli democracy in the region, but no Western democratic state would withhold basic rights from millions of people living under its rule, as Israel does. 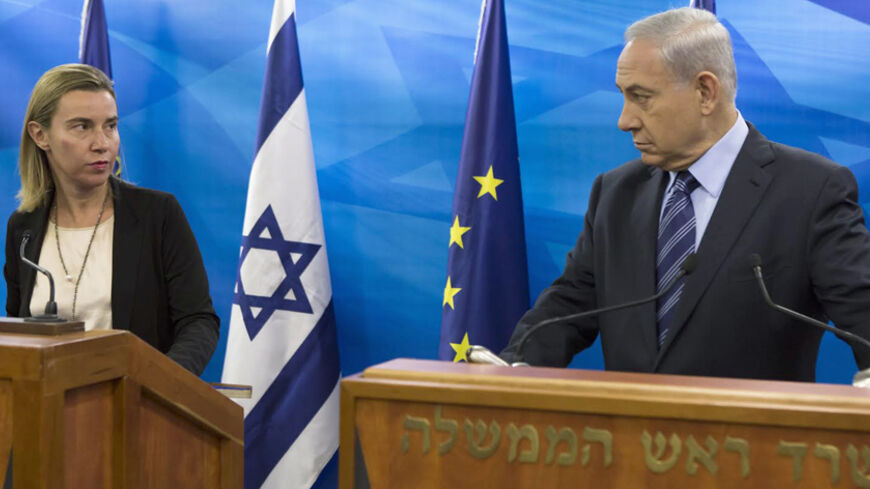 Israeli Prime Minister Benjamin Netanyahu has devoted special efforts in recent weeks to stop the diplomatic erosion of Israel’s stand in Europe’s capitals. As noted by Uri Savir in his latest Al-Monitor article on Nov. 9, there are growing indications that if the leading European states decide to take off their gloves in the fight against Israel’s right-wing government policies, the Barack Obama administration will not rush to use its long-standing veto weapon. Netanyahu’s weapon in the defensive battle he is waging for Europe’s soul is epitomized in the crushing question that he fires at guests from the neighboring continent: “Tell me, please, on which state in this region can you truly rely? On Syria? Iraq? Jordan? Egypt?”

The answer is obvious and also fairly correct: Israel is the most stable country in the Middle East and the only one that espouses Western democratic values. In the speech Netanyahu delivered at the annual memorial ceremony for former Prime Minister Yitzhak Rabin on Nov. 5, he portrayed Israel as a bubble of Judeo-Christian well-meaning normalcy, which finds itself in a hostile Middle Eastern Muslim environment. “We were always proud of our democracy, which is unusual in the landscape that surrounds us,” waxed poetic the man who took part in the incitement against Rabin that preceded his murder.

He added, “Indeed, the State of Israel is not a violent country. We see this clearly in light of what is occurring around us — beheadings, throats being cut, firing squads, executions and so on. Israel's exceptional nature in this landscape is remarkable.”

Indeed, if one measures it on a Middle Eastern scale, next to the Islamic State, the regime of Bashar al-Assad in Syria and even the Egyptian administration of Gen. Abdel Fattah al-Sisi, Israel’s democracy is a dazzling beacon. But, when Israel demands that Europeans judge it by Western standards, it must take into account that their values do not include prolonged occupation, the end of which is nowhere in sight. Europe never accepted the claim that Netanyahu made on Nov. 7 to European Union High Commissioner for Foreign Affairs and Security Federica Mogherini that settlements are not an obstacle to peace.

The correct question is not which country is the most wonderful in the Middle East, as Netanyahu asked, but which country that presumes to be a standard bearer of democracy and human rights would take the liberty, in 2014, of confiscating lands from foreigners to settle its citizens on them. What Western state withholds basic rights from millions of people living under its rule? What would the European Union do with a member state that conducts itself toward its Jewish minority the way Israel does toward its Arab minority?

In Netanyahu’s defense, it must be said that he does not have a copyright on the condescending and righteous attitude toward Israel’s surroundings. In an interview with The New York Times at the First Zionist Congress in Basel in 1897, Theodor Herzl promised that establishing a Jewish state in the Land of Israel would provide Europe with a “new frontline bastion against Asian barbarism.” Max Nordau, Herzl’s close aid, claimed in his speech at the same congress that the peoples of Asia are “degenerates.” More than 20 years ago, Israeli Prime Minister Ehud Barak described Israel as “a villa in the jungle,” and subsequently upgraded the analogy to “an oasis in the middle of the desert” surrounded by a “turbulent world.”

Nonetheless, Barak stressed that while one hand must always have a finger on the trigger, the other must always be feeling its way toward the possibility of an arrangement with the neighbors.

In his book “Political Rhetoric: Israeli Leaders in Stressful Situations,” Nadir Tsur of the political science department at Hebrew University describes Prime Ministers David Ben-Gurion, Menachem Begin and Yitzhak Rabin, in his second term, as “formative leaders.” In addition to providing for the basic needs of the general public, Tsur explains, these men left their mark by adopting change and improving Israel’s lot. At the memorial ceremony for Rabin, Netanyahu said that “we all share” the slain prime minister’s hope that the political moves he made would create “an island of peace inside this violent ocean.” Nonetheless, he immediately added, “We all share this hope, but we are not averting our gaze and ignoring what is happening around us.” What diplomatic move of Netanyahu’s created “an island of peace”? Indeed, he does not ignore events around us; there is nothing he does better than warn against “the heaving ocean” around us.

On the day Netanyahu delivered this speech, former US Secretary of State Henry Kissinger was laying out his credo to members of the Council on Foreign Relations in New York.

“[A]ny decision in foreign policy must begin with an analysis of the situation. And it must answer the question, where are we?” the noted statesman suggested. “The next question is, where are we going? Where we are going no matter what we do? And where should we be going?” After you answer these two questions, you have to define the limitations of what is possible, Kissinger explained, and warned that setting targets that the system cannot handle will cause it to explode.

“A great statesman operates at the outer limit of what is possible on the basis of a correct analysis and the difference between greatness and mediocrity,” Kissinger said.

Netanyahu’s rhetoric, deeds and misdeeds prove that based on his analysis of Israel’s situation, he has come to conclude that the best move is stepping in place and scaring people away from any change. But Netanyahu’s ultimate goal — perpetuating the occupation and bringing the Palestinians to heel — deviates from a long list of external limitations: starting with the demographic problem, through the state of Israeli democracy and up to the danger of losing the peace agreements with Egypt and Jordan, withdrawal of the Arab Peace Initiative and a weakening of US and European support.

According to Kissinger’s diagnosis, Netanyahu is, at best, a mediocre statesman. Or, as was well put by Amir Peretz, who resigned on Nov. 9 from his job as minister of environmental protection, ''Netanyahu is not the solution — he is the problem."