A poll after the attack on the Har Nof synagogue and an academic study indicate that when Israelis feel threatened, it plays into the hands of the right-wing parties, at the moment benefiting first and foremost the Likud Party. 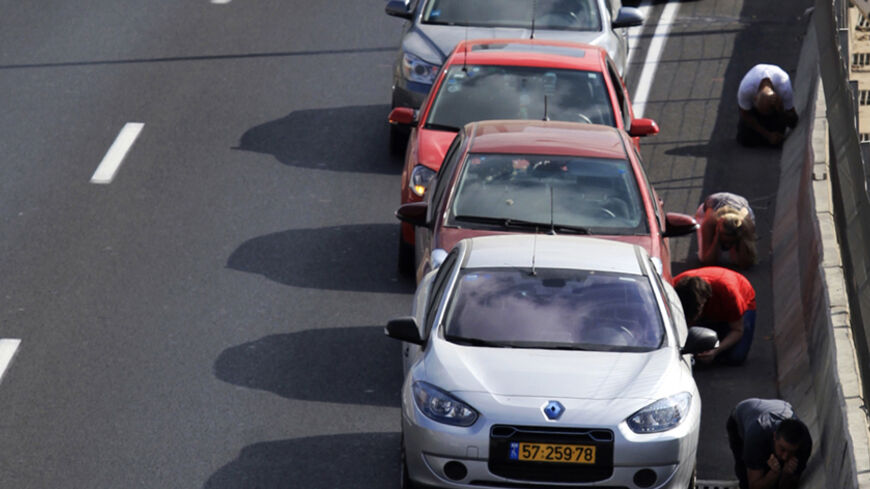 Drivers take cover beside their cars on a highway as an air raid siren, warning of incoming rockets, sounds in Tel Aviv, July 9, 2014. - REUTERS

According to a survey conducted for the Israeli news site Walla! a few hours after the murderous, Nov. 18 attack on a synagogue in the Har Nof neighborhood of Jerusalem, if elections had been held that same week, the three right-wing parties would have been able to form a coalition of 63 Knesset members.

In the 2013 elections, the three right-wing parties — Likud, Yisrael Beitenu, and HaBayit HaYehudi — amassed a total of 43 mandates. According to the latest poll, they would have been able to form a right-wing government without partners from the center or the ultra-Orthodox parties. The Likud, under Prime Minister Benjamin Netanyahu, would have 27 mandates, HaBayit HaYehudi's share would soar to 19, and Yisrael Beitenu's mandates would increase to 17 Knesset members. The Labor Party's mandates would have fallen from 15 to 10, and Yesh Atid's would plummet from 19 to 6. By comparison, another poll conducted for Israeli TV Channel 10 on Nov. 17, before the attack, estimated that the three right-wing parties would garner 55 mandates.

The gloomy, but not surprising, conclusion emerging from the data is that terror pushes the Israeli public to the right. Meretz Party head Zehava Gal-On dared to say on Nov. 23 that the government’s preoccupation with the nationality bill at this particular moment, when spirits need to be pacified rather than incited, proves that it is comprised of irresponsible pyromaniacs. According to Gal-On, those cabinet members pushing the bill are only interested in scoring political points.

The connection between terror and voting patterns has been demonstrated in the work of Anna Getmansky (Lauder School of Government, Diplomacy, and Strategy at the Interdisciplinary Center, Herzliya) and Thomas Zeitzoff (School of Public Affairs at American University). They published their findings in the article “Terrorism and Voting: The Effect of Rocket Threat on Voting in Israeli Elections,” in the prestigious American Political Science Review (Aug. 2014). The researchers examined the effect the range of rockets fired from Gaza had on Israelis' voting patterns in four elections. The elections analyzed were held in 1999, when a rocket threat did not exist; in 2003, when 1% of Israelis were within the range of rocket fire (10 kilometers [6.2 miles]); in 2006, when the proportion of vulnerable residents went up to 3% (20.4 kilometers [12.7 miles]); and 2009, when 14% of residents (43 kilometers [26.7 miles]) were threatened by terror from rockets.

The research demonstrates that the vote share of right-wing parties is 2 to 6 percentage points higher in locations within the rockets' range. This led the researchers to conclude that if the entire Israeli public were susceptible to rocket fire from Gaza, it would be expressed in two to seven additional mandates for the right. The Likud is the big winner in the right-wing camp. The voters do not punish the Likud, although the range of Hamas' rockets expanded during the years of its rule and responsibility, despite the explicit promise Netanyahu made in 2009 to topple the Hamas regime in Gaza. The reason for this, according to the study, is not the “rally round the flag” phenomenon, but because the security issue is strongly associated with the Likud. In other words, mere preoccupation with the security situation strengthens the Likud twofold, first, in comparison to the center and left-wing parties and, second, in comparison with other parties associated with the nationalist camp. The proof is that when the Kadima Party was in power, it did not “benefit” from rocket fire.

The research findings also took into consideration localities that ultimately did not suffer damage from the rockets, but where people nonetheless reacted to the siren alerts and spent time in shelters. This demonstrates that even the mere atmosphere of a security threat pushes Israeli voters toward the arms of the right. This also holds true in regard to Netanyahu's ongoing “fear campaign” involving the Iranian threat. The more Israelis become convinced that they are within the range of missiles from Hamas, Hezbollah, Syria or Iran, the stronger Likud gets. Also, Israelis within rocket range become increasingly more skeptical of the messages of peace and reconciliation espoused by the dovish parties.

Of course, no Israeli politician ever hopes for the murder of civilians in terror attacks. However, the actions currently being taken by the government on the ground and in the Knesset in response to terror attacks — such as destroying the family homes of terrorists and other collective punishments — not only do not stop terror, but they actually embolden it. This approach to punitive measures and deterrence are not in line with professional opinion. In 2005, a military committee appointed by Chief of Staff Moshe Ya'alon and headed by Maj. Gen. Udi Shani reached the conclusion that the limited deterrence achieved by the demolition of homes in the occupied territories paled in comparison to the hatred and hostility toward Israel that these steps produced. An internal study conducted by the Israel Defense Forces and published at the end of 2003 found that there was no proof that house demolitions had a deterrent effect.

The government’s policy on the conflict with the Palestinians in the occupied territories and toward Israeli Arab citizens is proving to be lucrative for the current regime's popularity. At best, this policy emanates from intellectual fixation. At worst, the motives are to be found in dark, murky politics.