After weeks of violence and protests, Israel has eased entry restrictions to Al-Aqsa Mosque to de-escalate the tensions there. 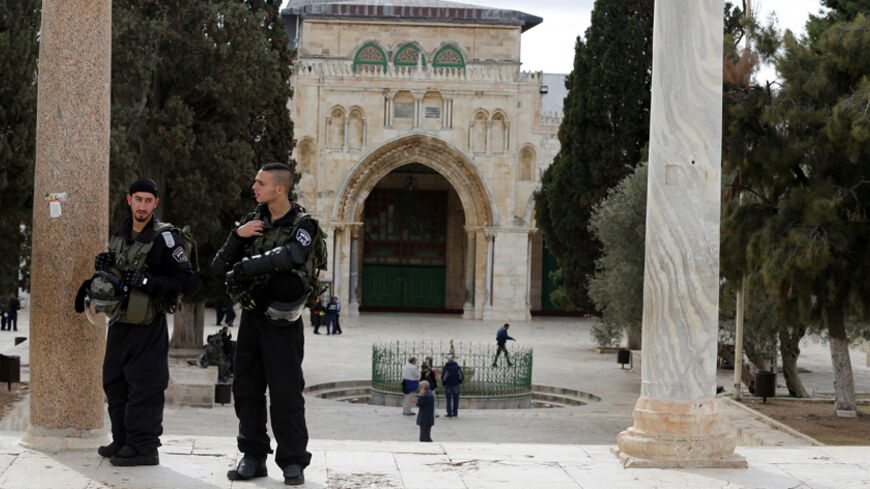 Israeli police stand guard on the compound known to Muslims as the Noble Sanctuary and to Jews as the Temple Mount in Jerusalem's Old City, Nov. 5, 2014. - REUTERS/Ammar Awad

Driving from Bethlehem to Jerusalem on Nov. 13, the 10 a.m. news report on Jordan radio was reassuring. After noting the meeting of King Abdullah, US Secretary of State John Kerry and Israeli Prime Minister Benjamin Netanyahu, it announced that all had agreed to soothe tensions in Jerusalem and that entry to Al-Aqsa for the faithful would be eased.

I was planning to go to Al-Aqsa, but was unsure whether to believe the news. The scene outside Damascus Gate that morning was not reassuring. I counted at least 10 large Israeli police vehicles and saw dozens of policemen preparing themselves for a battle. Israeli police on four horses went by in an additional show of force. I waited for the 10:30 news on Israel radio in Arabic, but that report focused mostly on the latest controversy between the heads of the Israeli army and police over who knew what before the Gaza war.

I walked into the Old City along with many others. Aside from a few cameras on top of the stairs leading to the gate, there was no visible sign of the tension that had rocked the city for days. Just inside the walls, a group of Israeli police officers in their navy blue uniforms stood idly as Palestinians walked past local merchants hawking toys and cellphone covers and women farmers trying to sell sage, parsley, mint and raisins.

At an intersection, another cluster of policemen, this time including two border patrol guards in khaki uniforms, stood by as people walked to the mosque area. Shortly, I approached the house that late Israeli Prime Minister Ariel Sharon had taken over in an act that provoked many protests in 2000. I asked a sweet shop vendor if Sharon’s home, which still had a large Israeli flag on it, had become vacant. He replied that it is occupied by four Israeli settlers. Just around the corner from the house was yet another group of six Israeli police officers.

A similar scene, with larger numbers, greeted me as I walked past the Austrian Hospice just by Station 4 of the Via Dolorosa. At the corner that connects two pathways were no less than 12 police officers, including three border guards. All had their helmets, a police rod and a pistol handy, on top of bullet-proof vests and walkie-talkies in hand. Before I made the final turn into the mosque near Bab al-Majlis, a group of policemen and border patrol guards came walking from the Western Wall area.

My heart was now pumping as I wondered whether I would be allowed in. I clutched my Jerusalem ID, which showed that I am a legitimate resident of the city. If men over 50 were allowed in, I was sure that I would be permitted. I approached the final cluster of Israelis, which included a woman at a desk recording ID card numbers and a police and border guard team that eyed people as they walked in. No one stopped me or anyone else as we walked into the Haram al-Sharif area. I walked up to the Dome of the Rock and asked a young man to take a photo. Ali, 20, said everyone had been allowed in that day, including young people like him. “If they had not allowed us in today, there would have been an explosion,” he explained.

I walked around the mosque's grounds with families as couples and many women sat eating sandwiches or chatting. While the Friday prayer hadn’t started, a sheikh was speaking over the loudspeaker giving a generic sermon that included criticism of young people who are not following the Quran and not living pious lives. I went past the Dome of the Rock and closer to Al-Aqsa Mosque without seeing any soldiers. But on one side, just inside the Mughrabi Gate, I noticed six Israeli policemen sitting on chairs. No one came close to them as they sat guarding the gate through which Jewish extremists had entered during the past weeks to the anger of the Palestinian population.

I stopped by to speak with the head administrator of Al-Aqsa, Abdel Rahman Al Ansari, who told me that what happened on Oct. 29 was unprecedented. “After lobbing tear gas and sound grenades, the Israelis entered Al-Aqsa Mosque in their boots and reached all the way to the Salaheddine pulpit.” Mention of the pulpit brings back memories of the 1969 act of arson that burned the original pulpit. King Hussein of Jordan later funded the restoration of the original pulpit. Ansari noted that the Israeli incursion and grenades had left visible burn marks on the mosque’s carpet.

“Go to the front left side of the mosque and you can see the marks,” he told me. Following the violent Israeli action, Israel closed the mosque completely for the first time in decades. In response, Jordan recalled its ambassador for consultations, and Israeli and US officials jumped in to calm tensions.

With age restrictions dropped, 40,000 Palestinians were allowed into Al-Aqsa Mosque that Friday. A few young people were ordered to temporarily surrender their ID cards to ensure that they wouldn’t participate in any violent demonstrations afterward.

Ansari credited the efforts of the Jordanian king, who met with Kerry and Netanyahu the night before, with easing restrictions on entry to the mosque area. Others believe that the Israelis backed down due to the anger of the Palestinians and the protests that were spreading throughout Palestine and Israel.

While Friday’s prayers ended without any major violent incident, it's clear that the presence of large numbers of Israeli police and border patrol guards were an attempt to keep a seething pot from boiling over. The root cause of the tensions in Al-Aqsa and Jerusalem would be far from resolved even if the tensions had de-escalated.