Sanctions talk heats up after second extension to Iran talks

Lawmakers are making the case for a new round of sanctions in a Republican-controlled Congress. 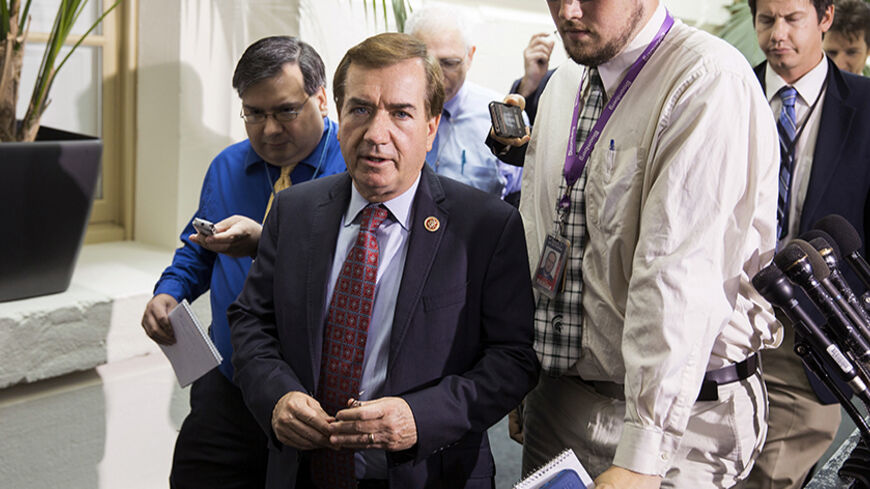 WASHINGTON — Lawmakers wasted no time calling for new sanctions on Iran after nuclear negotiators punted for a second time.

Top Republicans in the House and Senate urged immediate action as soon as the new GOP-dominated Congress takes office in January following midterm elections that saw Democrats lose the Senate. The statements follow a slew of letters to the administration ahead of the Nov. 24 deadline that laid out firm demands for any final agreement.

Despite feisty rhetoric from hawkish members who are taking power, Republicans — and Congress more generally — remain divided on the best way forward. On both sides of the aisle, some critics of the negotiations haven’t given up on the talks, suggesting that those who expect a raft of new sanctions early in the new year shouldn’t hold their breath.

“We believe this latest extension of talks should be coupled with increased sanctions and a requirement that any final deal between Iran and the United States be sent to Congress for approval,” Sen. John McCain, R-Ariz., the incoming chairman of the Senate Armed Services Committee, said in a joint statement with Sens. Lindsey Graham, R-S.C., and Kelly Ayotte, R-N.H. “Every member of Congress should have the opportunity to review the final deal and vote on this major foreign policy decision.”

“The cycle of negotiations, followed by an extension, coupled with sanctions relief for Iran has not succeeded,” Menendez said. “I continue to believe that the two-track approach of diplomacy and economic pressure that brought Iran to the negotiating table is also the best path forward to achieve a breakthrough.”

The pro-Israel lobby AIPAC joined the chorus of voices calling for more sanctions after Monday's extension.

"It is now essential that Congress take up new bipartisan sanctions legislation to let Tehran know that it will face much more severe pressure if it does not clearly abandon its nuclear weapons program," read a statement released on the group's website.

John Cornyn, the number two Republican senator for the incoming Congress, vowed to weigh in, but remained vague on specifics.

On Iranian nuke aspirations, relieved that WH didn't embrace a bad deal; bipartisan Congress will have more to say on this come January

And Sen. Jim Risch, R-Idaho, the likely chairman of the Senate panel on the Middle East come January, called the extension “not helpful to President Obama’s legacy.”

“With this extension, President Obama has defined a new normal where Iran can continue its nuclear weapons program and receive billions of dollars in sanctions relief with no movement toward changing its unacceptable behavior,” Risch said. “The Iranian regime needs to be taught that it must come to the table with serious actions to end its nuclear program, or the West will walk away, isolate, and punish their threatening behavior.”

In the House, Foreign Affairs Committee Chairman Ed Royce, R-Calif., struck a similar tune. “This seven-month extension should be used to tighten the economic vice on Tehran — already suffering from falling energy prices — to force the concessions that Iran has been resisting,” Royce said.

House intelligence panel Chairman Mike Rogers, R-Mich., went one further and called on Obama to ditch his entire diplomatic strategy. “While the White House longs for a deal, Iran strengthens its hand,” said Rogers, who is retiring from Congress for a talk radio show. “It is time for the Administration to reconsider its entire approach to Iran.”

The Obama administration is well aware that Congress is running out of patience.

“I’ve talked to members even while I’ve been here for the past days,” Secretary of State John Kerry said at a news conference in Vienna on Nov. 24. “I hope they will come to see the wisdom of leaving us the equilibrium for a few months to be able to proceed without sending messages that might be misinterpreted and cause miscalculation. So my hope is we will have that breadth, and we certainly stand prepared to work with the Congress in every way possible to make sure that everybody’s interests are properly listened to, processed, implemented, taken into account.”

Some lawmakers appear ready to give the administration some space.

“Since the beginning, I have been concerned about a series of rolling extensions becoming the norm and reducing our leverage. However, I would rather the administration continue to negotiate than agree to a bad deal that would only create more instability in the region and around the world,” said Sen. Bob Corker, R-Tenn., incoming chairman of the Senate Foreign Relations Committee. “With so much riding on these talks for the security of our nation and that of the region, Congress must have the opportunity to weigh in before implementation of any final agreement and begin preparing alternatives, including tougher sanctions, should negotiations fail.”

A number of other lawmakers have also weighed in over the past few days as it became clearer the talks wouldn’t produce a deal by the November deadline.

Last week, 43 senators — every Republican save for Rand Paul, R-Ky., and Jeff Flake, R-Ariz. — signed on to a letter to Obama promising to block sanctions relief unless the “White House “genuinely engages with Congress.”

Meanwhile, 11 Republican senators-elect signed on to a statement from Tom Cotton, R-Ark., demanding that any final deal “comply with the United Nations’ previously enacted limitations on their nuclear program.”

In the House, Royce teamed up four days ago with ranking member Eliot Engel, D-N.Y., on a statement demanding that a final deal ”must foreclose any pathway for Iran to develop a nuclear weapons capability.”

“It must include an effective, intrusive, and long-term verification mechanism that would give us ample warning of any attempt by Iran to break out,” they wrote. “It must also require Iran to come clean on its past work to develop a bomb.”