If Iranian President Hassan Rouhani were to battle poverty as he said he would, he must address the corruption that resulted from efforts to evade sanctions. 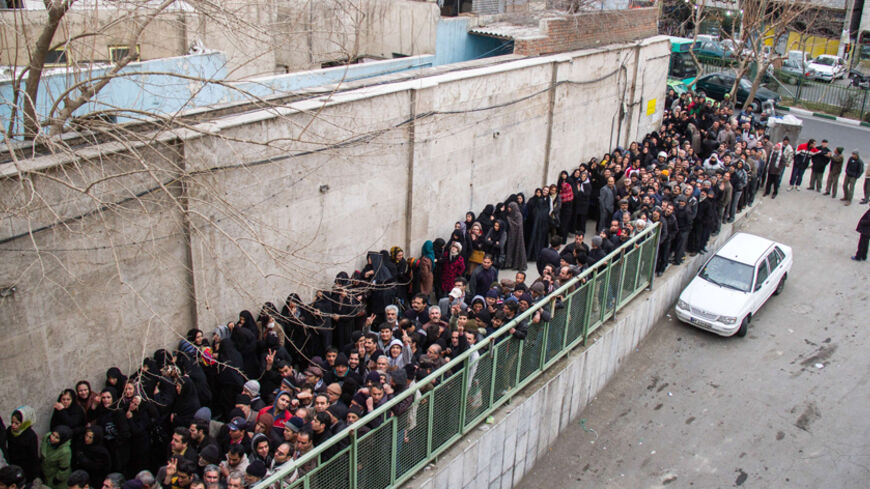 A correspondent in Tehran
November 6, 2014

Tabnak, a news website owned by Expediency Council Secretary and former presidential candidate Mohsen Rezai, has criticized the government for refusing to release the latest poverty data in the country. On Oct. 30, the conservative website questioned the government's policy on the controversial Subsidy Reform Plan, a legacy from the previous administration, arguing that the cash handouts amounting to 45,000 rials ($14), payable to almost every citizen monthly, cover only a minor portion of their costs.

The Statistical Center of Iran released a report last month showing the average expenditure for an urban household is about 10,925,000 rials ($336), much lower than 25 million rials ($780) estimated by independent economists.

Neither the organization nor the Central Bank of Iran has yet released official figures on the poverty level in urban or rural areas, the website noted.

Thirty-six years after the “anti-capitalist” revolution, Islamic leaders have failed to ensure the fair distribution of wealth and equality of opportunity. In Iran, 7 million people now live in absolute poverty and their food security is at risk. At the other end, 5 million are superrich, with wealth comparable to that of the richest Americans, as Labor Minister Ali Rabiee has put it.

Fighting poverty has been a focal point for President Hassan Rouhani since he took office last summer. In his Oct. 22 speech in the northwestern city of Zanjan, the president reiterated there was “no evil worse than unemployment and poverty.”

Officials predict that unemployment will become a major issue in a few years when about 4 million “unskilled” university graduates join the current 4 million jobless. According to the latest data available, in the last fiscal year, almost one-fourth (24%) of Iranian households did not have even one employed member. The figure was 10% back in 1992-93, indicating that many families have lost a reliable income source since 21 years ago.

In the past year, measures taken by Rouhani’s economic team have helped curb inflation and end two years of negative growth, but observers believe the moderate president will face grave challenges in reducing poverty as the lucrative parts of the economy are mainly controlled by either the government or semi-private entities that have close links with power circles.

So far, Rouhani has adopted a three-part policy to assist the most vulnerable population in the short run, earn the trust of the private sector in the middle term and achieve sustainable economic development in the long run, with each requiring a separate strategy.

In February, the administration began distributing long-promised food packages to help the poorest, though bad planning sent the scheme awry from the start, denting Rouhani's popularity.

Despite criticism by politicians and activists representing a wide political range, the government is said to be providing food aid for about 7 million citizens living in absolute poverty. It’s been a complicated, time-consuming effort to identify the needy people whose food security is at risk. Yet, officials have vowed to identify more in the future, probably up to 10 million.

Some economists argue that millions of dollars in food aid and monthly cash handouts will only add to an already soaring budget deficit. However, the president insists on continuing to grant the cash handouts to almost every citizen, fearing that a sudden cut in the aid could hurt many crowded rural families and lead to nationwide dissatisfaction or social unrest.

So the administration is likely to maintain both programs at least until the end of Rouhani’s first term, though it has begun steadily removing well-off citizens from the 75-million-member list of cash recipients.

Earning the trust of the private sector

In a September 2013 speech, Rouhani implicitly called on security bodies, namely the Islamic Revolutionary Guard Corps (IRGC), to only engage in large projects so that it does not compete with the private sector.

Since then, the IRGC has shown it will not oblige, as its command does not report to the president but rather to Supreme Leader Ayatollah Ali Khamenei. In May 2014, Mohammad Bagher Nobakht, the administration’s spokesman and Rouhani's adviser for Supervision and Strategic Affairs, gave in to the rising pressure from the IRGC and announced, “Major projects that cannot be completed by the private sector should be given to the IRGC. … We will give these projects to the armed forces and especially to the Khatam al-Anbiya,” the main economic arm of the military body employing 135,000 people.

To convince the public that the government does not support involvement by the security forces in business, the Intelligence Ministry announced in October that ministerial bodies were not involved in any sort of business activity, calling on citizens to report business owners who might claim to have links with the Intelligence Ministry. But the fact is that the ministry’s agents would never be authorized to reveal their identities even if they did run a business. The move could be considered an effort to get the private sector involved in giant business projects, signaling that they do not need to be worried about the rent-seeking activities that cost the economy dearly in recent years.

In Zanjan, the president touched on “security” during his speech as a major issue that needs to be addressed by the government if the private sector is to play an active role, saying, “Entrepreneurs need to feel secure and not all businesses must be run by the government.”

Despite Rouhani’s hard work to reduce public concerns over the involvement of security and intelligence bodies in the economy, the private sector seems to remain cautious about major investment activities, as government rent-seeking and discrimination has paved the way for extraordinary wealth generation by certain groups in the past few years.

But the government still hopes to work more closely with the private sector to create jobs for the almost 10% of the population that is unemployed. Even so, the employed are not necessarily any better off. With a minimum wage amounting to one-third to one-fourth of the poverty level in big cities, hundreds of thousands of workers live in poverty and are increasingly forced to hold two or more jobs.

The administration knows well that recession, joblessness and economic hardships are not so much due to economic mismanagement as government intervention and exclusion from world markets. So, while trying to decrease its domination over the economy, the administration has since last year focused on finding a solution to a 12-year nuclear dispute with the West, in an effort to open Iran's economy to world markets.

Western-educated diplomats who already reached an interim deal with the five permanent members of the UN Security Council plus Germany (P5+1) are now likely to achieve another agreement, even if only a temporary one, with the United States and other world powers by the Nov. 24 deadline.

The recent intensified sanctions against Iran facilitated the operations of rent seekers and allowed corrupt networks to operate under the guise of sanctions-busting. With another nuclear deal looming, the Rouhani administration is expected to have the upper hand in the domestic scene to combat economic corruption. This would pave the way for the real private sector to help integrate the Iranian market into the rest of the world after long years of isolation.

But securing an 8% growth rate, as set by macroeconomic plans, is only feasible if Rouhani can establish lasting relations with world economic players and be honest with the public, from moderate opposition groups overseas to Reformists and moderate conservatives inside the country, in the “real war on poverty” ongoing since the 1979 revolution.