Hamas is carefully studying Ennahda’s election loss in Tunisia amid concerns that Hamas may suffer a similar result if elections were soon held in Palestine. 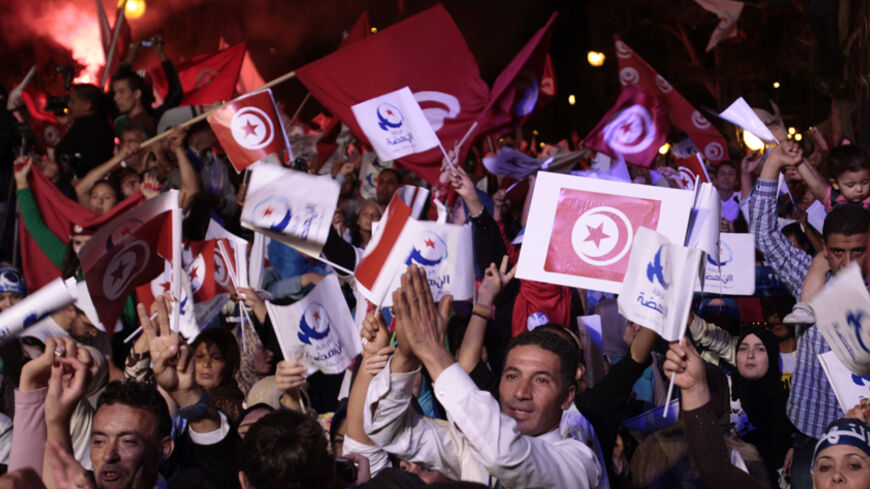 Hamas has thoroughly studied the results of the Tunisian parliamentary elections, which resulted in its Muslim Brotherhood ally, Ennahda, falling to second place.

Hamas eagerly awaited the results on Oct. 26, in light of the war being waged by various Arab regimes against Islamic movements, and given that this was the first election to be held since the overthrow of the Muslim Brotherhood in Egypt in July 2013.

Hamas’ follow-up on the Tunisian elections and Ennahda’s decline was aimed at trying to understand the mood of the Arab public opinion toward Islamists in general. In short, it sought to know whether Hamas could face a same scenario if Palestinian elections were held.

Bassem Naim, head of Hamas’ international relations in Gaza, told Al-Monitor, “The situations of Hamas and Ennahda are not equivalent, as each has special situations that do not apply to the other. While Ennahda’s result and decline were affected by civil and administrative criteria, Hamas’ situation is linked to the conflict with the occupier [Israel] and this political aspect dominates its ruling experience.”

Naim added, “Although the Palestinian resistance’s working conditions are not the same as in the Tunisian experience, this does not negate the fact that the Ennahda Islamists have an advanced political philosophy compared with other Islamists in the region.”

Ahmed Youssef, political adviser to Hamas’ former Prime Minister Ismail Haniyeh, wrote in an article published Nov. 5 that the Tunisian election results gave him some consolation, in the sense that Islamists are becoming capable of studying politics and accepting electoral results.

Yahya Moussa, chairman of the the Committee of Public Oversight and Human Rights for Hamas, told Al-Monitor that it is hard to compare the situations of Hamas and Ennahda, "as the former leads a liberal project under the occupation while the latter lives in an independent country. Therefore, the rules of the game are different, although Hamas needs to thoroughly review the Palestinian situation without returning to elections, which will further complicate the political scene.”

“Ennahda’s decline in Tunisia negatively affects Hamas’ situation among the Palestinians, even though it may provide it with certain new space to act. Hamas is a resistance movement rather than a political party like the Ennahda party,” Moussa said.

Interestingly, the Palestinian Authority has good relations with Ennahda. President Mahmoud Abbas sent envoy Jibril Rajoub in early September to meet with Rachid Ghannouchi, the leader of Ennahda, and asked him to persuade Hamas to accept the reconciliation agreement with Fatah. Ghannouchi transferred this request to Hamas leader Khaled Meshaal when Meshaal visited Tunisia on Sept. 12.

A prominent official in Ennahda told Al-Monitor, on condition of anonymity, “Hamas in Palestine is a peculiarity for all Islamic movements and there is no need to compare it with Ennahda in Tunisia, as it maintains the freedom to formulate its programs and determine its references in line with the Israeli occupation. Hamas has combative tasks that require it to not abide by the certain Islamic experience that Ennahda [had to] in Tunisia or the Muslim Brotherhood in Egypt.”

Hamas, however, is apparently determined to contest the upcoming elections, despite what may seem as declining support for Islamists in the Arab region. On Oct. 26, the day of the Tunisian elections, Khalil al-Hayya, a member of the Hamas political bureau, called for comprehensive Palestinian elections within three months.

Naim, also a former Hamas government health minister, told Al-Monitor, “Many of those who spoke about and analyzed the results of the Tunisian elections and interpreted the decline of Ennahda are not very familiar with [the group’s] experience. ... It may have been a planned decline on the part of Ennahda leadership. It could also be the result of poor ruling performance. It might be that the Tunisians were worried about the election of Islamists after what happened in Egypt.”

He told Al-Monitor, “Hamas will bear in mind the regional context [of Egypt and Tunisia] in the upcoming elections and it will seek to forge partnerships with others. Hamas is closer to the Muslim Brotherhood in Egypt than the ideas of Ennahda in Tunisia, whose electoral results will have a great impact on Hamas thought and political performance.”

“Hamas will participate in all the upcoming municipal and legislative elections, despite Ennahda’s decline in Tunisia,” Naim said. “Hamas is likely to nominate a consensual candidate in the presidential elections rather than one of its figures.”

Moussa voiced a different view: “If Hamas contests the elections, as Ennahda did, and wins them, how can it be sure that no new sanctions similar to the current ones will be imposed, knowing that the current ones have been ongoing for eight years. If the other camp, Fatah, wins, then how can we guarantee that Hamas will not be excluded?”

“Hamas is asking for new options, and it will sit out the elections in order to take advantage of the experience of Egypt and the overthrow of the Muslim Brotherhood. Ennahda took advantage of them and decided to bow before the storm, which does not want Islamists in the political scene. Meanwhile, Hamas is monitoring the Egyptian and Tunisian experiences with caution and attention,” Moussa said.

Al-Monitor learned of a Hamas internal assessment prepared after Ennahda’s decline to establish a link between that result and Hamas’ potential in the coming elections. According to the assessment, “Hamas is invited to reflect on the expected results of its entry into presidential and legislative elections in light of both the overthrow of the Muslim Brotherhood in Egypt and the decline of Ennahda in Tunisia. It has to find answers to the big question: How will the next blockade unfold if Hamas wins the next election?”

“Hamas is closer to Ennahda’s experience in Tunisia than Egypt's Muslim Brotherhood, the evidence being Hamas’ withdrawal from the government and its dealing with the reconciliation with Fatah. However, Hamas has to look for a combination that can unite the Palestinian national community, rather than resorting to elections with unknown consequences. Israel and the US will not accept its victory again in the elections,” Moussa said.