The death toll among students in Egyptian schools has been rising because of negligence and deterioration of school maintenance. 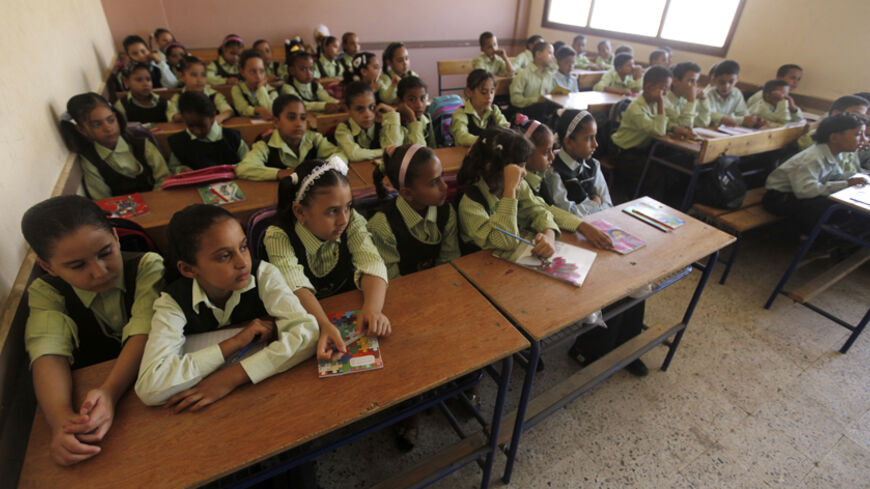 Students attend a class on the first day of the new school year at a government school in Giza, south of Cairo, Sept. 22, 2013. - REUTERS/Mohamed Abd El Ghany

CAIRO — Two months have passed since the academic year began on Sept. 20, which has not been peaceful so far as a number of students have been killed in incidents that took place at their schools, due to "negligence and the deterioration of school maintenance," according to parents interviewed by Al-Monitor.

On Oct. 13, Youssef Mohamed, a primary school student, died after a dilapidated class window at Ammar ibn Yasir public school in the rural El-Matareya district in Cairo fell down onto him, cutting his throat.

Youssef was bleeding profusely, and several hospitals refused to admit him to avoid taking responsibility. Finally, one hospital admitted him and he underwent surgery. But soon after, he was pronounced dead.

“I was sitting beside Youssef on that day, when the students asked him to open the class window because it was hot, but the dilapidated window dropped on his neck cutting his throat,” his classmate Ahmed told Al-Monitor. Ahmed, 10, was hesitant while speaking to us but his mother encouraged him to tell his story.

“The class teacher was not there during the incident, but once he knew and saw Youssef bleeding, he closed the class door and disappeared.”

Ahmed’s mother clarified that the teacher was eating his breakfast outside the class and had left the students alone. She said, “When my son came from school that day, his face looked pale. He told me what had happened but I did not believe him until the news was confirmed.”

“The teacher did not help Youssef, and we [the students] rushed out because we were scared. The class has been locked since the incident, and since then I have not been to school,” Ahmed said.

“My children did not go to school for one week, and most of the parents were scared also to send their children after the incident,” Ahmed's mother said. She added that both the school principal and the teacher had been suspended and referred for an investigation and a new principal was appointed.

“Now there is a follow-up from the Ministry of Education, and I noticed that when I was accompanying my children to school that a steering committee is coming to school periodically.”

The school incidents did not stop there. The incident involving Youssef was followed by another one Oct. 19 at Zaghyrat public primary school in Matrouh governorate, about 500 kilometers (311 miles) from Cairo. The school gate collapsed and landed on top of student Youssef Soltan Zaki, 7, while he was playing in the school yard. The school principal stated at the time that the gate was old and rickety and could not bear the blowing wind.

Forty-eight hours after the death of Soltan, third-grader Ahmed Abdel Aal was hit by the vehicle transporting the school meals and pronounced dead at the scene. His friend, Waleed Ibrahim, who goes to the same public school (Amin el-Nasharty) located in Giza governorate, about 15 kilometers (9 miles) from Cairo, was severely injured in the same accident.

Often parents think negligence and lack of maintenance is mostly found in public schools, so they enroll their children in private schools, even if that entails extra expenses. This is, however, proving to be an incorrect assumption. On Oct. 29, Youssef Sameh Gerges, enrolled in private language school Bardy, located in Qalyubia governorate about 45 kilometers (28 miles) from Cairo, died after the water fountain fell on him; he was trying to climb it during the school break.

The last reported school death in October was of student Petter Magdy, who died while climbing the fence in his secondary school, Ahmed Bahgat, in Giza governorate. He stumbled and fell on an iron skewer on Oct. 30.

“Both dead students and the school principals are responsible for what happened,” Mohamed Ageez, member of the Student Union of Egypt Schools, told Al-Monitor.

After the number of school deaths increased and after photos showing the negligence and lack of maintenance at public schools were circulated and posted online, outraged parents demanded the resignation of Education Minister Mahmoud Abou el-Nasr. However, the minister is still in office, stating on TV that he is not willing to resign and he will not “flee from his battle against negligence.”

Enrollment this year reached 18 million students in 48,000 schools spread across Egypt, according to the latest figures. The ministry has intensified its campaigns against schools liable for negligence. School principals, who were present at the moment of the incidents, were suspended and interrogated.

However, fear still dominates parents and students. A mother whose four children are all enrolled at a public school told Al-Monitor, “We are afraid that this keen interest is only momentary and will soon fade. I am worried about my children, and it's not a sound decision to keep them home from school, but what can I do about it?” she said.

This semester also witnessed another horrible incident: Eighteen students were killed when their school bus crashed Nov. 5 into three vehicles on the Cairo-Alexandria agricultural road in Beheira governorate, about 263 kilometers (164 miles) from Cairo. The student's bodies were completely burnt.

“I love my school but I fear things will fall on my head or drop from the ceiling while we hurry to head home at the end of every day,” a little boy helping his father at an auto repair shop told Al-Monitor.