At least 110 Egyptian political prisoners are on hunger strike to protest their treatment, receiving assistance from activists who are highlighting their plight. 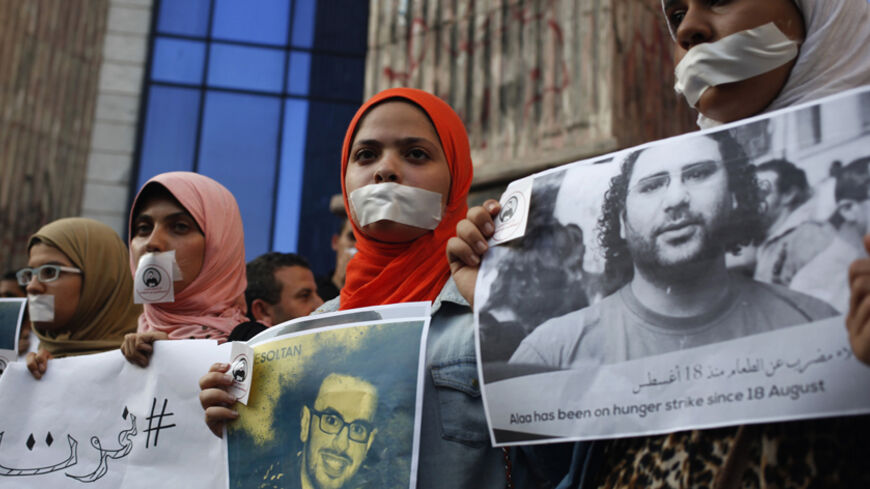 Protesters hold pictures in support of imprisoned activists on hunger strike in front of the Press Syndicate, in Cairo, Aug. 25, 2014. - REUTERS/Asmaa Waguih

CAIRO — “I am not afraid of death lurking around me. I want to live, but I want to live free or die free, even if I had to lose my life in return for freedom,” read a letter from Mohammed Sultan, who has been on a hunger strike for 10 months. Security forces stormed his home and arrested him Aug. 25, 2013. They had been searching for his father, a Muslim Brotherhood leader.

Sultan is one of the many political detainees who went on hunger strike in protest of several security practices against them in prisons, and their continued incarceration without clear charges or a fair trial. This is how the “Empty Stomachs” battle started between detainees and security authorities who do not want to admit or document cases of hunger strike, which are not recognized by the constitution nor by Egyptian law.

Since the beginning of September 2014, groups of political activists in the Alumni Club of Cairo Institute for Human Rights Studies (CIHRS) organized performances to tell the stories of detainees on hunger strikes, and published their letters in solidarity with them. The club also documented their testimonies gathered through stories relayed by their parents or written letters that family members were able to sneak out of the prison.

Mohamed Zaree, the Egypt program manager for the CIHRS, told Al-Monitor, “The idea of the show was to document the stories of detainees on hunger strikes from among different political movements, and of others who are not affiliated with any movement.”

“In prisons, detainees do not have the privilege protesting, which is why they resort to hunger strikes as the only means of resistance,” Zaree added.

Despite the strict security circumstances under which political activists in Egypt are now operating, Zaree said, “We will try to perform in more than one place and province, but we are facing tough security and media campaigns that may be the fiercest ever launched against civil society and human rights organizations.”

The first storytelling performance, held at the American University in Cairo, relayed stories and letters from detainees. This was not a call for a hunger strike, but an attempt to portray the inhumane conditions of the detainees inside prisons and the reasons that led them to go on such a strike.

“I decided to go on hunger strike as my only crime was that I was holding a camera, even though I work in a foreign agency and I have government authorization. No trial has been set for me yet. The prison warden even threatened me if I continued my strike.” This is another message of one of the journalists who was arrested during the protests of Aug. 16, 2013.

Despite the deterioration of the health of a number of detainees on hunger strike, due to a lack of medical care such as in Sultan's case, security authorities still deny the existence of prisoners on hunger strikes. In this respect, Assistant Interior Minister for Human Rights Maj. Gen. Abu Bakr Abdel Karim indicated in a press statement on Oct. 24 that the Ministry of Interior has issued decisions to recommend the detainees to renounce their hunger strike, and to follow-up on their health situation.”

“We Have Had Enough” is another campaign launched by a group of lawyers to document hunger strike cases before the legal authorities in Egypt, and to draft legal reports proving the rights of detainees. The campaign calls on the authorities to provide them with health care and consider their demands.

Yasmine Hossam, a lawyer and volunteer with the “We Have Had Enough” campaign, told Al-Monitor, “There are no accurate numbers for detainees on hunger strikes. This is due to several reasons. The first is that the prison administration refrains from drafting reports about hunger strike cases.” Hossam indicated that the estimated number of cases that the lawyers were able to document reached almost 150 in detention centers.

Hossam added, “We are facing many obstacles in terms of submitting formal notices on hunger strike cases to the public prosecutor or police departments. The main objective of these notices and complaints we are filing is to ensure that the prison administration provides detainees on hunger strikes with their health care rights.”

Hossam explained the legal problem in the battle of the “Empty Stomachs.” She told Al-Monitor that Egypt's constitution and laws do not provide clear guidelines for handling cases of hunger strikes in prisons and detention centers. “We refer to international treaties ratified by Egypt, which preserve the prisoner’s right to protect his life and have access to health care,” she said.

Hossam confirmed that the hunger strike battle is the method of resistance chosen by the Egyptian detainees despite the threats they face to break and renounce their strike.

The battle of detainees on hunger strikes continues, as dozens in Egyptian prisons protest their incarceration without convictions or a fair trial and neglect by authorities. The situation has become so dire that the slogan raised by political activists on social media has degenerated from “freedom for the detainees” to “life for the detainees.”