New legislation has been proposed to revamp Egypt’s outdated and ill-functioning health insurance system and cover all Egyptians under one universal insurance umbrella. 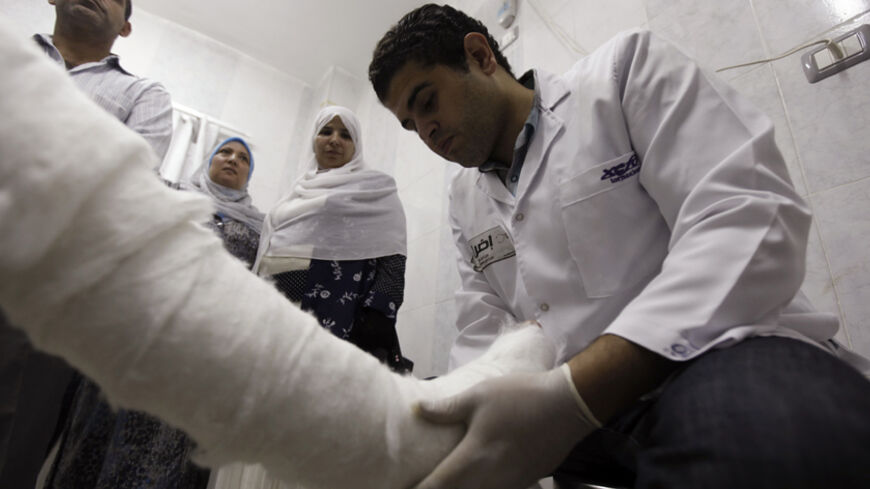 CAIRO — The health insurance system in Egypt could easily be called a failure, as Egypt's Health Insurance Organization (HIO) is subject to outdated laws that have scarcely been modified in line with skyrocketing costs across all sectors.

Public hospitals have become a place to humiliate people who aren't privately insured. They receive minimal care from doctors and nurses, who receive low wages as government employees, their services provided free of charge.

Although the profession of medicine is an exact one, negligence has become a major characteristic of these hospitals.

When Egyptian patients became fed up with the situation, a new comprehensive social insurance law was drafted. It promised to resolve the predicament by separating medical services from funding considerations. In the past, patients received medical services based on the insurance policy provided by their professional union. For instance, journalists would get better benefits through the Journalists Syndicate than teachers would through their organization.

However, it was not long before doubt arose regarding certain articles of the proposed legislation, as they seemed to pave the way for privatizing the health sector and thus violate the constitution.

Dr. Gamal el-Zeiny, a former member of Egypt's parliamentary health committee, told Al-Monitor, "The comprehensive social insurance draft law is great as a general idea, as it puts an end to the differences between the rich and the poor and unites all Egyptians under one insurance umbrella. The draft law also aims to end dependency on the state's decisions of whether or not to provide necessary treatment, as in many cases patients die before decisions are issued to this effect. This law would also encourage competitiveness, as patients would have the option to chose where to receive medical treatment, and incompetent hospitals would therefore not be frequented. This way, the performance level of hospitals would be put to the test as their general assemblies would dismiss inefficient boards of directors that are incapable of competing.”

He added, “Currently, the main beneficiary of health insurance is at an individual level, but with the new law the family would be the basis of insurance benefits. The law was drafted with the hope of including large segments of Egyptian society that are not insured, such as farmers and craftsmen, under an insurance umbrella."

Dr. Ihab al-Tahir, the secretary-general of the Egyptian Medical Syndicate (EMS) and a member of the "Doctors Without Rights" movement, said, "The draft insurance law is flawed, as it does not cover ambulance or emergency services, which had been assigned to other institutions of the state without specifying which ones. The draft law also does not cover medical services for burns or injuries resulting from natural disasters."

He asked, "Would it be possible to treat patients who suffer from burns the same way as those who are victims of earthquakes, volcanoes and floods?" Burns, he said, are usually the result of accidents, and the law in its current form is trying to avoid covering burns because of the high treatment costs.

"Therefore, we demand equality for all, without exception," Tahir said, adding that contracting hospitals for medical services on the basis of quality standards works to the detriment of the insurance system.

"The EMS has demanded several times, in vain, that a special electoral system be held in hospitals. Under the current system, hospital managers are chosen at personal whims. However, high quality services are not the result of successful management only; they need to be well financed as well," he added.

Furthermore, Tahir said that the current funding system is flawed in Egypt, a poor country. In this system, patients are responsible for 20% of the costs of medical tests, 20% of the costs of X-rays and one-third of the value of the treatment, not to mention consultation fees, which differ from one medical specialist to another. One option would be to increase monthly premiums to increase funding, thereby making treatment itself free of charge.

He said, "The new insurance draft law includes an article stipulating that HIO's projects shall not be subject to the state’s tenders and bids. This raises the question of why would the HIO be above reproach?"

He went on, "As for excluding the armed forces from the comprehensive social insurance plan, it is because they have their own privileged insurance system that covers their entire personnel for any disease or accident, completely free of charge."

For his part, EMS Chairman Khairy Abdel Dayem said that the syndicate wants a law that would cover all citizens without discrimination and take into consideration the difficult economic conditions of millions of Egyptians. He explained that the draft law, which is still under review, has advantages and drawbacks. Importantly, patients would have to pay for treatments on top of the monthly premium paid according to their income. He added that all of these issues are negotiable, but the project as a whole has the potential to improve the medical services provided to all Egyptian patients.