In an interview with Al-Monitor, Abu Snan Local Council head Nuhad Mishlav refers to the clashes last week between Druze and Muslim youth, saying, "The entire Arab leadership in Israel is mobilized to resolve the crisis and return to coexistence." 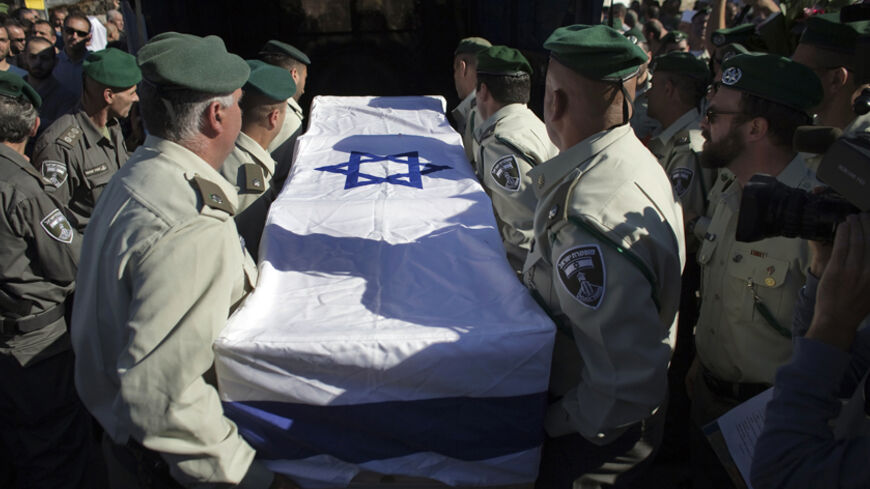 Israeli border police officers lift the flag-draped coffin of their comrade Jidan Assad during his funeral in the Druze village of Beit Jann in Israel's Galilee, Nov. 6, 2014. - REUTERS/Finbarr O'Reilly

The tension between Druze and Muslims in Israel has never been expressed as severely and violently as was the case in the village of Abu Snan on Nov. 15. In fact, most Israeli Jews were not even aware of the tremendous animosity that divides the Israeli Druze citizens and the Muslim Arab-Israelis. That all changed with a massive altercation in which about 40 youths were injured, one of whom is in critical condition and eight in serious condition.

Many of those injured in the incident are Muslim and Druze students from the town’s high school. They quarreled on the backdrop of the security tensions prevailing in Israel in recent weeks, and the question of loyalty to the country — an issue that divides Arab society.

It is well known that the members of the Druze sect have tied their fate to the State of Israel. They follow in the footsteps of their leader Sheikh Amin Tarif who passed away more than 20 years ago, and who instructed Druze youth to enlist in the Israel Defense Forces (IDF) military service, to support the State of Israel and to be worthy of the rights that the state bestows on its citizens. In fact, many individuals in the Druze community acquire a military career in the army’s regular service. In October 2013, a member of the Druze community, Col. Rassan Alian, was appointed Golani Brigade commander. Alian serves as a role model and paradigm for many Druze youth. He was wounded in the Gaza Strip in the course of Operation Protective Edge.

On Nov. 5, Border Police Officer Jidan Assad from the Druze village of Beit Jann was murdered in Jerusalem in a terror attack committed by a resident of East Jerusalem. In the village of Kafr Kana on Nov. 8 policemen shot Khair Hamdan, an Arab youth who waved a knife at them. Thus, while the Druze members mourned the murder of Assad, who left behind his pregnant wife and a 3-year-old child, Israeli Arabs declared a general strike and conducted mass demonstrations in protest of the killing of Hamdan.

This is a tragic, painful illustration of the complex and convoluted reality between the Druze and the Muslims, one that sometimes places them on opposite sides of the fence.

In mixed villages such as Abu Snan, the issue of loyalty to the State of Israel divides the residents. The violent brawl over the weekend was sparked by a skirmish within the walls of the local high school, when two students came to school wearing keffiyehs as a sign of identification with Hamdan. Druze students confronted and defied them by showing off their Star of David pendants, and the school administration was forced to cut classes short and send the students home to ease the tensions. Following this incident, a brawl began in the village center, in which dozens were hurt. This may very well signal the beginning of a great rupture between Israel’s minority groups.

According to data for 2012 provided by Israel’s Central Bureau of Statistics, more than 12,000 people live in Abu Snan. Of these, about 53% are Muslim, 30% are Druze and 16% are Christian. Abu Snan is the home of court justices and high-level IDF officers such as Gen. (Res.) Yusuf Mishlav, former coordinator of activities in the territories and a relative of the current council head, Nuhad Mishlav.

“Elements with vested interests took action to fan the fires of dissent in the village, and now the entire Arab leadership in Israel is mobilized to resolve the crisis and return to coexistence,” said Abu Snan’s council head in an interview with Al-Monitor. “We have just finished a meeting with the forum of Druze and Circassian council heads, and we decided unanimously that we are in favor of living together in Abu Snan, in favor of easing the tensions. We will not allow the current tension to destroy decades of coexistence and harmony between us.”

Al-Monitor:  Did the brawl surprise you? Weren’t you aware of the great tension prevailing these very days between Druze and Muslims?

Mishlav:  Any kind of violence, small or large, is surprising. We could not sense the tension. We took control of the problem in the school and reached an understanding there. The brawl erupted [later] between youth who are not students and do not belong to the school; one stabbed the other and that ignited the whole riot.

Al-Monitor:  The tension between the Druze and Muslims relates to the question of loyalty to Israel. How does one bridge the fact that the Druze enlist in the IDF and perform magnificent service, when the Muslim villagers look at them in a negative light?

Mishlav:  We, Druze, are loyal to the state and will continue to be loyal. But all of us, members of various sects and sectors, live together in one community. We have behind us decades of coexistence; we live together and study together. We will make a joint effort to return the situation to its former state.

Al-Monitor:  The discourse surrounding loyalty to Israel and the IDF service sharpens the tension between the sectors, and I assume that it won’t disappear today or tomorrow.

Mishlav:  I can speak in the name of Abu Snan and what took place here. The violence erupted on a small scale in the school, after the incident in Kafr Kana. We will continue to ease tensions and return the quiet.

Al-Monitor:  In the brawl there were expressions of violence of a kind that I cannot recall witnessing in the past, an intensity of fury and hatred that many were not aware of between Muslim and Druze. What can be done to ensure that no further violent incident shall erupt again?

Mishlav:  I pray and I do everything in my power to restore quiet and security to Abu Snan. The local and regional leadership proposed their help in peacemaking efforts for the benefit of all the Abu Snan residents, and we are involved in dealing with the issue every single moment to achieve our goal.