AKP condemns one tragedy but downplays another

Turkey's Justice and Development Party (AKP) has pummeled the opposition CHP party for its responsibility in the 1937 Dersim tragedy, but has avoided discussing past mistakes made by Islamists. 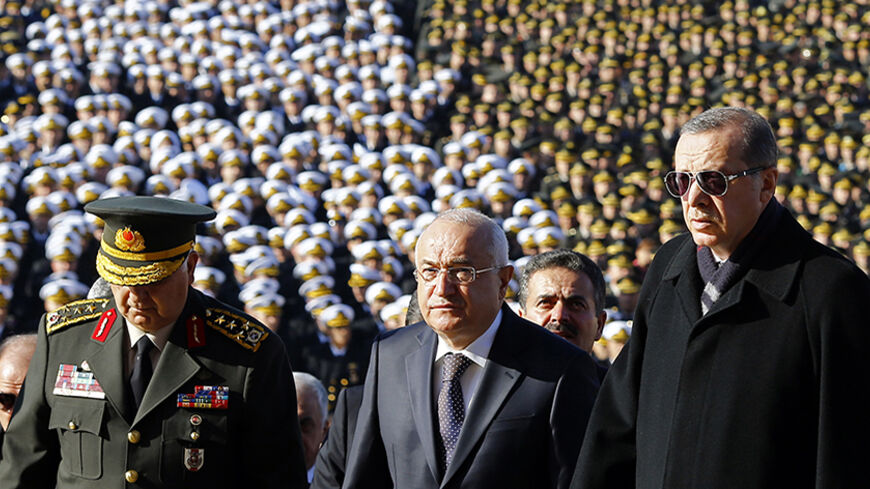 Cemil Cicek, speaker of the Turkish parliament, expressed concern Nov. 17 that the international community would begin a smear campaign in 2015 against Turkey, marking the centennial of the lost Armenian lives at the end of the Ottoman Empire. While Turkey has accepted the 1915 events as a “massacre,” it contradicts the international community that calls it a “genocide.” Since the 1980s, Turkey has also been lobbying foreign parliaments, and especially the US Congress, not to make any binding or nonbinding decision declaring it a genocide.

Previous Turkish governments, before the ruling Justice and Development Party (AKP) came to power over a decade ago, argued all along that foreign parliaments are no place to judge history, and that it should be the job of historians to debate in all ways this bloody tragedy in history. “That is why we tell to the parliaments, ‘You are not an international court or a scientific committee. You must focus on building todays and tomorrows.’ I still hold the same point,” Cicek said. “The Turkish parliament should also make an effort in the same direction.”

Cicek was responding to the questions as to what he thought of Sezgin Tanrikulu, an Istanbul deputy of the main opposition Republican People’s Party (CHP), extending an apology allegedly on behalf of his own party on a television program, where he became the target of some of his own party members who accused him of acting dishonorably. Tanrikulu’s appearance was not the beginning of this debate. Then-Prime Minister Recep Tayyip Erdogan stoked the fires just ahead of a September 2010 referendum by bringing up the Turkish military’s operation in 1937 in Dersim to end a Kurdish uprising. He kept Dersim in the public debate in the run-up to the 2011 local elections.

Erdogan was simply trying to collect political gains by highlighting the dark parts of Turkey’s history — attacking the CHP, the single-party era and therefore its new leader, Kemal Kilicdaroglu, who is from Tunceli (formerly Dersim) in the process. Erdogan wanted to embarrass Kilicdaroglu by creating the impression in the nation’s eyes that he was acting against the people of his own hometown by leading a party that had given the order to bomb the uprising in Dersim in 1937, ending so many innocent lives. He hoped that it would bring him votes. He was right. Erdogan has not lost any election since he came to power, but the town of Tunceli voted against him in the 2010 referendum and the CHP won the town's local elections in 2011.

If the AKP is sincere — as Cicek argues — in its use of history to determine a better direction for the country today and in the future by avoiding the mistakes of the past, Erdogan should not have used this traumatic incident as a political football. Rather, he should have grasped the gravity of his position and taken real action by bringing the issue to the parliament for an official apology and compensating the victims, finally allowing the country to turn the page and strengthening its unity.

“I choose to look at today, and tomorrows. We have a lot to do moving ahead. Those who have the duty to make plans [for the country] should draw the lessons from the mistakes of the past. We should indeed do that,” Cicek said when he was asked whether Kilicdaroglu should also extend an apology for the Dersim events. “The public is now debating this issue. I don’t believe there is anything that I could say to be useful to this debate in practical terms.”

Cicek should reconcile these words with his own approach to the past. He had defamed those speaking at the 2005 Bilgi University Conference on the Ottoman Armenians during the demise of the empire, by accusing them of "stabbing the Turkish nation in the back."

That said, the AKP government has selectively used events in Turkey’s past as political tools while ignoring others. Though officials have frequently spoken of Dersim and claimed that the Republican era was an enemy of pious Muslims and those women with headscarves, they chose not to bring to public debate any mistakes of the past conducted by the Islamist circles.

AKP officials should understand that opening Turkey’s dark chapters to public debate will inspire other groups to seek redress, and that Armenians lobbying foreign governments for justice is no different than the AKP’s own policies with regard to Dersim.