Egypt’s youth 'have had enough'

Though many of the youth leaders who participated in the 2011 revolution are in prison, youth-driven political campaigns will continue under President Abdel Fattah al-Sisi. 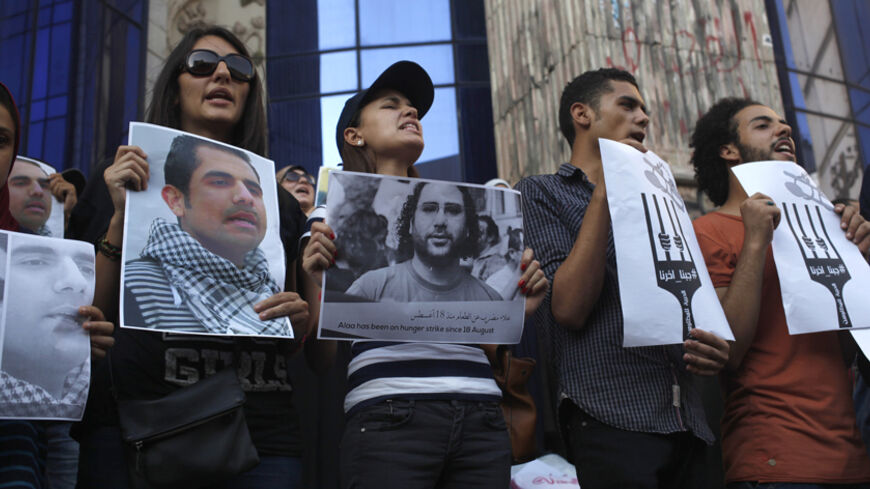 Protesters hold pictures during a protest in support of imprisoned activists who are on a hunger strike, in front of the Press Syndicate in Cairo, Aug. 25, 2014. - REUTERS/Asmaa Waguih

CAIRO — The movements and campaigns of Egyptian political life are still largely youth-driven. During the era of President Hosni Mubarak, the April 6 Youth Movement arose and during the Mohammed Morsi era, the Tamarod campaign emerged. Now, under President Abdel Fattah al-Sisi, similar movements are gaining prominence.

The latest, “We Have Had Enough,” was created by a number of young activists, including political activists from former movements, such as April 6.

Zizo Abdo, a political activist with April 6 and spokesman for “We Have Had Enough,” told Al-Monitor that the campaign was created in prison following an article written by activist Alaa Abdel Fattah titled “I have had enough.” In his article, Fattah pressured the regime to release what he called "prisoners of conscience."

Abdo said, “The campaign also demands the holding accountable of anyone involved in the killing of any Egyptian, whether a peaceful protester or a member of the armed forces and the police. It aims to engage in a serious debate on the timetable for the separation of powers, achieving independence of the judiciary, setting minimum and maximum wages and amending the protest law so as to regulate protests and not prohibit them.

“These campaigns had a significant role in pressuring the regime to release some of the activists, led by Alaa Abdel-Fattah. The campaign began a hunger strike demanding the release of detained activists and the amendment of the protest law,” he added.

Abdo believes the decision to release the activists does not show a genuine intention by the state to open a new page with the activists, but what he considered to be “only a political maneuver, since our hunger strike has led to a state of confusion.”

Rifaat al-Sayed Ahmad, a columnist and political analyst, told Al-Monitor that the release of some activists showed the youth movements’ ability to influence the state. According to Ahmad, the state sought to avoid any crises before parliamentary elections, and the negotiations between the National Council for Human Rights and the Minister of Transitional Justice to amend the protest law confirm a willingness to change.

Another youth movement, the Dhank movement, was founded Sept. 3 by activists known for holding news conferences wearing masks. Their Facebook page does not contain the names of any leader or contact person for the movement.

Al-Monitor managed to speak to a spokesman for the movement, Sami Abdul Shahid, who said the Dhank movement was a pressure group with economic and social demands founded by 60 activists aged between 18 and 36, with different orientations and ideas. “The movement organized about four or five major campaigns to pressure the state into making some economic and social adjustments by persuading citizens, for example, not to pay the electricity bills as a protest to the frequent power cuts,” he said.

“The movement succeeded in forming a popular base since the ‘Poor Revolution’ event, to which we invited more than 175,000 citizens,” he added. “The regime and the Ministry of Interior are seeking to morally assassinate the movement by persuading the Egyptian people that the movement is one of the branches of the Muslim Brotherhood, and this is absolutely not true.”

When asked why the movement has emerged under Sisi, despite the poor economic situation that existed under previous rulers, he replied, “The economic situation has been deteriorating in Egypt for 30 years and has deteriorated further in the past three years. The movement did not emerge under the rule of the military council or Morsi, since both regimes did not seek to increase the burdens borne by the citizens and make their living conditions even worse, contrary to the regime of Sisi, which increased the burden on them by lifting subsidies and raising the prices of all commodities.”

Political analyst Ahmad does not believe the Dhank movement’s denial of ties to the Muslim Brotherhood, saying that after the arrest of some its members in the provinces of Suez and Ismailia, their affiliations with the Brotherhood were discovered.

“After the Muslim Brotherhood’s failure to politically influence the Egyptian people, they are now trying to reach the people and incite them against the regime through movements such as Dhank. However, the movement has had no noticeable impact on the Egyptian street yet,” he said.

Ahmad believes that the future of such youth movements depends on the state’s future decisions. Political improvements, such as amending the protest law, and economic improvements will contribute to the decline of the influence of such movements, and will help develop the relationship between the state and youth activists not affiliated with the Muslim Brotherhood.

Abdo said the “We Have Had Enough” campaign insists on the implementation of the 14 amendments demanded by the National Council for Human Rights. The adoption of these amendments by the state will indicate a sincere intention to open a new page with the young activists.

But amending the protest law may not be the final solution to resolving tension between the state and youth movements.

“There will be no negotiations on accountability and the release of detainees,” Abdo said. He described the judiciary as politicized, reflecting his lack of trust in the only legitimate institution capable of executing the demand of accountability. Abdo said a large number of detainees were prisoners of conscience, and the charges against them were fabricated by the Ministry of Interior and the public prosecution. “This means that the vision some of the young activists have about ​​accountability may not put an end to the tensions between them and the state,” Abdo said.

The activists do not have a clear vision that can be applied, such as their demands for accountability, to end the conflict between the state and the youth movements, and suspicion persists that will be difficult to overcome.