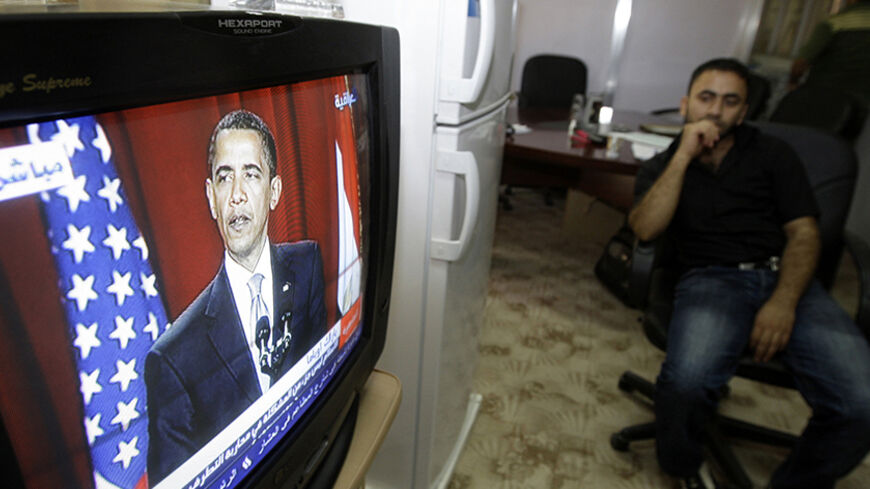 A resident watches a television broadcasting the speech of US President Barack Obama from Cairo University, at the Culture Ministry in Baghdad, June 4, 2009. - REUTERS/Mohammed Ameen

The Barack Obama administration has downgraded what was once a marquee program to promote democracy in the Middle East — a sign, some critics say, that counterterrorism once again dominates the US agenda in the region.

Established in 2002, the US-Middle East Partnership Initiative (MEPI) touts on its website its work in “18 countries and territories” and contributions of more than $600 million to “support civil society groups, political activists, and business leaders in their efforts for political and economic reform, government transparency, and accountability projects.” The site also says that “MEPI has recently increased programming significantly in countries undergoing democratic transitions in the wake of the Arab Spring — including Egypt, Libya, and Tunisia.”

However, the program — founded by Liz Cheney when she was deputy assistant secretary of state and traditionally headed by a political appointee — is now run by a career foreign service officer and has been subsumed into the larger foreign aid bureaucracy that also handles security assistance. One of two offices MEPI long operated in the region — in Tunisia — is being moved from the region’s only successful new democracy to Morocco, a monarchy.

“Unfortunately, MEPI seems to be in the process of being gutted and losing its identity,” Stephen McInerney, executive director of the Project on Middle East Democracy, told Al-Monitor.

Compared with the George W. Bush administration, the Obama administration has always had a more nuanced approach to promoting democratic reforms in the Middle East. But it retained and even enlarged some Bush-era programs such as MEPI and used them as a platform to encourage the grassroots movements that shook the region’s autocracies starting in late 2010.

In its first term, the Obama administration “decided to reinvent this agenda,” Tamara Wittes, a former deputy assistant secretary of state in charge of MEPI, told Al-Monitor. “It was not the ‘freedom agenda’ [of George Bush] but a different way of addressing the same set of issues.”

As counter-revolution and chaos turned Arab Spring into winter, however, the US approach began to shift. The biggest setback came in Egypt, where Mohammed Morsi, the country’s first freely elected president, was overthrown by the military in 2013. Since then, Egypt has jailed tens of thousands of members and supporters of the now-outlawed Muslim Brotherhood and severely clamped down on freedom of association and expression by other dissident groups.

McInerney attributes the reorganization of foreign aid to the Middle East to former US ambassador to Egypt Anne Patterson, who served in Egypt during a roller coaster period and faced strong Egyptian government opposition to US civil society promotion.

During her tenure, 16 Americans who had been working for US organizations, including the International Republican Institute and Freedom House, were tried and convicted — most in absentia — of using foreign funds to foment unrest.

Patterson left Egypt and was confirmed as assistant secretary of state for the Bureau of Near Eastern Affairs in late 2013. In her first interview after taking that position, she told Al-Monitor that it was “certainly no secret that we’re concerned about freedom of the press, freedom of association, all the fundamentals that are being thrown into question right now in Egypt,” but also said the United States would focus on promoting economic development.

“The decline [in the emphasis on democracy promotion] accelerated over the past year — the time when Anne Patterson came back and became assistant secretary,” McInerney said. “MEPI’s demise is indicative of a broader backing off from supporting civil society and falling back into the old pattern of not antagonizing old allies.”

A senior State Department official, who spoke to Al-Monitor on condition of anonymity, said that Patterson had ordered the reorganization not to downplay democracy promotion but because it made more “managerial sense” to put all foreign aid programs to Middle Eastern countries under one office. The official added that the Tunis office was being moved to Morocco for “logistical and administrative reasons.”

The official conceded that there had been changes in the US approach to democracy promotion — using more indirect methods and bringing more individuals to the United States for programs — but said this was more a function of new limitations placed on civil society groups by Middle Eastern governments than any reorientation of US policy.

“The fact of life is that we definitely are facing challenges in the region,” the official said. “Civil society groups are having specific problems in a couple of countries.”

Egypt, for example, keeps threatening to outlaw any independent civil society organization that has not registered with the government. The latest deadline is Nov. 10, although the State Department official noted that the date had been announced and postponed several times. The official said that the Obama administration was stressing to Egypt “the importance of leaving space for civil society and not making provocative moves like this.”

Democracy advocates worry that the quieter US approach encourages more repression, which they note is a fundamental cause for terrorism and extremism. It is not an accident, they say, that militancy has increased since the collapse of political Islam in Egypt — a development that has put a higher priority on containing and defeating terrorist groups such as the one that calls itself the Islamic State.

Wittes, who left the State Department in 2012 and now directs the Center for Middle East Policy at the Brookings Institution, told Al-Monitor “what has happened is the re-emergence of counterterrorism as the lens through which US policy is seen and formulated.”

The United States “has made a decision that it is fully prepared to go back to the business of overlooking significant problems with domestic governance, human rights and economic stability in the name of smooth bilateral cooperation” with governments fighting Islamic militants, she said.

Wittes added that the shift was symbolized not just by the bureaucratic reorganization but by Obama’s recent meeting at the United Nations with Egyptian President Abdel Fattah al-Sisi. While Obama raised the issue of three jailed Al Jazeera journalists with Sisi, Wittes said there was “no overt reference” to the thousand people killed and the thousands still jailed after last year’s coup.

Obama still uses pro-democracy rhetoric frequently, as in a recent speech to the Clinton Global Initiative on the sidelines of the UN General Assembly.

“Partnering and protecting civil society groups around the world is now a mission across the US government,” Obama said Sept. 23, touting a presidential memorandum instructing US government departments and agencies to “consult and partner more regularly with civil society groups” and “oppose efforts by foreign governments to restrict freedoms of peaceful assembly and association and expression.”

Obama also repeated one of his favorite quotations from the late Rev. Martin Luther King Jr. that “the arc of the moral universe is long, but it bends towards justice.”

According to Wittes, however, the irony is that the “Obama administration will leave office having brought Middle East policy full circle to what it was trying to get away from when it came in. The idea of supporting long-term political change has been pushed down the priority list to working with highly imperfect governments on a short-term counterterrorism agenda.”