Turkey’s Kurds pour their anger into the streets and the government declares a curfew in five predominantly Kurdish cities. 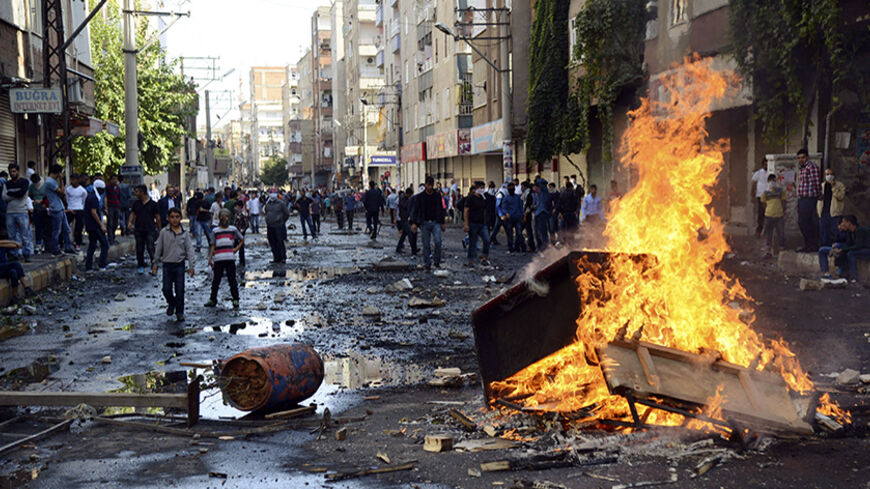 Kurdish protesters set fire to a barricade set up to block the street as they clash with riot police in Diyarbakir, Oct. 7, 2014. At least 18 people died in violent clashes across Turkey as the fate of the besieged Syrian border town of Kobani stirred up decades of tensions with Turkey's Kurdish minority. - REUTERS

The almost 4-year-old Syrian civil strife is threatening to spill over into Turkey. Turkey’s Kurds vented their anger in the streets across the country Oct. 7, warning the government that if it idly stands by while the Kurdish-dominated Syrian border town of Kobani falls to the Islamic State (IS), peace negotiations with the Kurdistan Workers Party (PKK) will end and a new round of armed conflict in Turkey will begin.

Members of Huda-Par (Free Cause Party), an Islamist Kurdish organization, clashed with pro-PKK crowds, especially in the country’s eastern and southeastern provinces.

Police used tear gas and water cannon to disperse the angry demonstrators; 18 people died in the protests. The government declared a curfew in Batman, Diyarbakir, Mardin, Van and Siirt. Turkish Interior Minister Efkan Ala said the Kurds’ outburst was “unacceptable” and that “violence won’t be tolerated.” He added, “It is a fat lie to claim Turkey isn’t doing anything about Kobani. Turkey is trying to do all it can in humanitarian terms. Turkey can in no way be pleased with Kobani’s fall and having a terror organization like [IS] on its borders.” He also said, “It is utterly irresponsible to hold Turkey directly responsible for developments occurring outside its borders" and to use such events as an excuse to end the fragile peace process.

Diyarbakir Mayor Gulten Kisanak disagreed. “It is not only the Huda-Par attacks in Diyarbakir; the government has applied its Plan B across the country. It deployed paramilitary forces against the public. It activated fascists in Istanbul, Azeris in Igdir and Hezbul-contra forces in Diyarbakir,” Kisanak said Oct. 7. Hezbul-contra is a derogatory term used to describe Turkish Hezbollah (Party of God), a Kurdish Sunni Islamist group that has been associated with Huda-Par.

Kisanak said, “This is a plan. The one who sets the circumstances for this lays the ground for a civil war in the country. This is a very dangerous situation. It is not normal for these attacks to all happen at the same time across the country.”

Kurds, however, are spread all across the country, and their anger in the streets clearly threatens the country’s security and stability. Moreover, Turkey is going through a decade of polarization to an extent never seen before in its republican history. Turkish President Recep Tayyip Erdogan’s policies have divided the public and his decision to put imprisoned PKK leader Abdullah Ocalan at the center of the peace process created serious controversy. Kemal Kilicdaroglu, the main opposition Republican People’s Party (CHP) leader, blamed Erdogan again Oct. 8 for having wrong-headed policies. “We urged this government to correct its foreign policy, lest it drag the country into the Middle East quagmire. Now it is in a sort of quagmire and trying to get out of it,” Kilicdaroglu said. “The Justice and Development Party is about to turn the country's situation into a bloodbath. It is not able to govern the country.”

Despite such serious disagreements about the country’s direction between Turkey’s ruling and opposition parties, all the legislators seem to agree that Turkey should use caution before ordering its ground forces to intervene in Kobani. Moreover, all agree that pro-PKK voices exaggerate linking the fall of Kobani to the fall of Ankara. Yet, they all believe that if IS captures Kobani, its jihadists will control a long stretch of the Syrian-Turkish border and that would pose a threat to the country’s national security. In sum, the situation is in a dire mess.

Dogu Ergil of Ankara University, who has decades of expertise on the Kurdish issue and militant Islam, told Al-Monitor that a good foreign policy has two nemeses: “One is to act on individual choices. The other is to act on ideology — including religious choices,” he said. “Even if there is a government elected by 80% of the votes, the country is gradually headed toward a destination where it will be impossible to govern because those in charge are making so many wrong decisions.”

Ergil sounded critical of the talks with the PKK, indicating they entailed too many unknowns, particularly while the state still defined PKK militants as terrorists. “If you are really determined to resolve this issue, it is utterly wrong to still claim the PKK is a terrorist organization. Turkey’s security today is not really threatened by the PKK,” Ergil argued. “This government wants to establish a religion-based lifestyle in this country that is opposed to any sort of secular order. Such a base of religious fanaticism forms part of a preparation to take the next step, which will eventually bring about the end of this government, too.

“But we see the circumstances are ready for such a base for two reasons. The pro-PKK crowds found religious fanatics against them on the streets yesterday. And there is a security alarm across the country expecting a potential IS suicide attack. There is a classified memo that was sent to all the 81 security directorates across the country today urging the security officials to be on alert, especially for minibuses and vans that could carry loads of explosives for suicide attacks. Why do you think this is taking place? Because they want to end the secular order in this country, and the only way to do so is to create this security threat.”

A Diyarbakir resident who identified himself as Hamza, and asked that only his first name be used, told Al-Monitor that he has many relatives who joined the PKK and that they all believed in the beginning that Erdogan was sincere in opening talks with Ocalan. “No one now thinks Erdogan was sincere even from the beginning. They just wanted to use us for their interests. But when IS circles the town, rains bullets on Kobani, what do they do? They just line up the Turkish tanks there to watch the slaughter of the Kurds,” Hamza said. “While Kurds face a massacre, Erdogan still conditions his military aid on [Syrian President Bashar al-] Assad being deposed. This is pure nonsense.”

In the meantime, senior US officials continue to express their dismay with Turkey’s Syria policy. A senior administration official told The New York Times on Oct. 7, “There’s growing angst about Turkey dragging its feet to act to prevent a massacre less than a mile from its border. … After all the fulminating about Syria’s humanitarian catastrophe, they’re inventing reasons not to act to avoid another catastrophe.” The same official added, “This isn’t how a NATO ally acts while hell is unfolding a stone’s throw from their border.”

Ergil said, “I also don’t mean that the Turkish military should intervene and carry out a cross-border operation to save Kobani from the IS militants. Let’s not say IS, but Turkey has helped the Syrian opposition since the beginning and allowed them easy passage into Syria from Turkey. The Turkish government could have done something similar for the Kurds and could have won their hearts and minds. Now there is no one who trusts Erdogan in Erbil [the capital of Iraq's Kurdistan Region] or elsewhere.”

Ergil also said the failure of politics in managing Turkey’s key issues led to deploying the military to provide security on the streets again and declaring curfews, mainly in Kurdish-populated areas. “This signals that the military has come back to politics. The ruling party now will be indebted to the military. The same military that they put behind bars for forming a terror organization to bring the government down and then they claimed that it is [US-based Sunni Turkish cleric Fethullah] Gulen followers in the judiciary and the security apparatus to be responsible for it all. The military knows too well that this government was behind that case and fully supported it. The military will make this government pay. Just watch!”