Turkish pianist controversy has many facets

While world-renowned pianist Fazil Say faces challenges performing in Turkey, there are growing questions about whether he handled this controversy wisely. 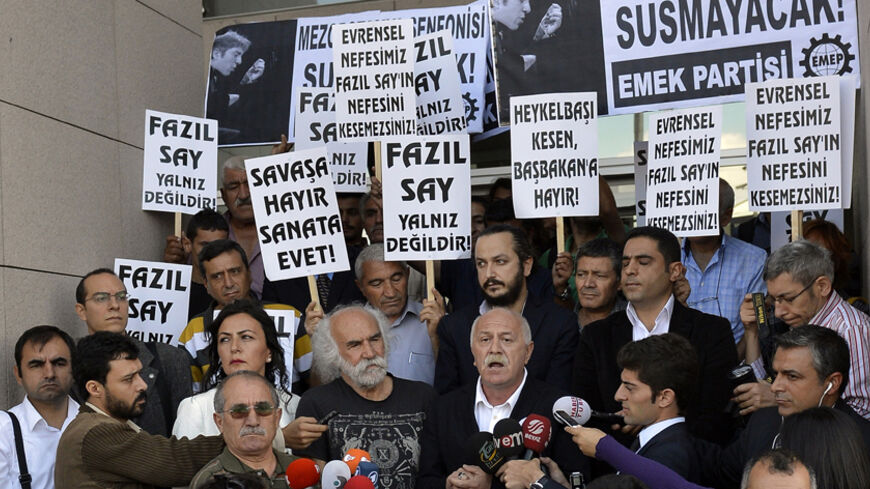 Fazil Say is a world-renowned pianist. He has been in confrontation with the government for the last two years. The tension recently reached a new height when Say’s works were removed from the 2014-15 Presidential Symphonic Orchestra program. This was outright censorship of an artist’s work. As Fehim Tastekin observed in his Oct. 27 article, this was not the first spat between Say and the government. In one of his Twitter messages in 2012, Say criticized the government over corruption, citing a verse from the Persian poet Omar Khayyam. This was even before the December 2013 graft probe surfaced. Say was found guilty in 2013 for his Khayyam citation, on the grounds that he was “openly denigrating religious values.” He received a suspended 10-month jail sentence.

Say decided to take center stage rallying against this government, further emphasizing the widening divide in the country between those who appreciate the values of this republic and those who do not. This divide could also be expressed in local language as Kemalists — those in support of the principles set forth by Mustafa Kemal Ataturk, the founding father of the Turkish Republic — versus those in support of President Recep Tayyip Erdogan, who appears to Kemalists as one trying to tear down every futuristic goal set forth by the founding father for perfecting the democratic standards of the country and Islamizing both governance and public life.

Due to this divisive, poisonous atmosphere in the country, Say appeared as the face of one side. Or, that is how he thought to position himself. This is not the whole story, however, and should not be. There are different layers to this story. First, the issue is not about Say as a performer, but Say as a person. He takes a position against the politicians in power, and when they abuse their authority, he hits back. Say then presents this as proof of how the government’s democratic maturity record has failed. There certainly is no question that there are serious problems about that, but the lack of questioning about Say’s behavior and attitudes seem to deserve some real questioning. It is not a given that whatever Say does is right in this complex puzzle.

Tastekin reported the following as Say telling daily Radikal: “Over the past several months, I was robbed of my 14-year Antalya Piano Festival, and my annual concerts with the Borusan Orchestra were canceled for some bizarre reason [that meant] an embargo on their part. Now the ministry has done the same. … I present my work all over the world, but I’ve become unable to present it in my own country. What’s the purpose here?”

Say is right that censorship should never be tolerated and that the government was wrong for removing Say’s “Istanbul Symphony,” “Water Piano Concerto” and “Hermiyas: the Boy on the Dolphin” from the 2014-15 Presidential Symphonic Orchestra schedule. There are, however, other facts that need to be taken into account. Say may not be a state employee, but all those playing with the symphony are. Turkey is one of those unique countries where artists are given state employment to protect their tenure and protect them against economic circumstances. This was a principle indeed set forth by Ataturk.

Al-Monitor has spoken to a variety of people in the performance community, where they strongly complain about governmental intervention in their work, but say that they still do not want to give up their privileged status. On the contrary, they complain that the government is hinting at the possibility that the new performers may not find the same job security as public servants and that becomes a key reason for the families not to send their children to study music and performing arts. Say, on the other hand, is well placed. He makes thousands of dollars from his concerts all around the world. Does he understand and empathize with the difficult situation that many performers find themselves in?

Say likes to have full control of his projects — even those supported by the state funds. Idealistically, he may be right that even those who pay the money should have no say in the artist’s direction and composition of a project. The real world has some different styles of working, though.

In July, Menderes Turel, mayor of Antalya, said they could continue the Antalya Piano Festival without Say. Here is the context of what he said and why he said it: “I talked about Fazil Say on television programs before the elections. I said it is not my business to weigh in on his political views, but that I feel honored to have his friendship. But Fazil Say tweeted the next day saying, ‘I don’t even greet a man like Menderes Turel. He is not my friend. Who does he think he is?’ These remarks certainly saddened me. Therefore we will see how he likes to go ahead with the piano festival. We will wait. In any case, the piano festival will continue with or without Fazil Say. No one should ever doubt that.”

Turel of the AKP is not talking about canceling the piano festival and withdrawing its municipally allocated budget. He is expressing reservations about whether Say would like to work for him, and his remarks make it clear that the answer is negative. Turel then appointed Gurer Aykal, a widely respected conductor, to continue with the preparations for the festival. Say reacted angrily. “AKP Antalya Mayor Menderes Turel and Gurer Aykal say they will make beautiful things together in Antalya,” Say said. “The Gurer Aykal who scolds his orchestra members for not wearing an Ataturk pin and the AKP will do beautiful things in Antalya. [Aykal] likes to build on this festival, which I was fired from.”

While no one is questioning the achievements of Say as a performer, one needs to raise the question of Say’s own words to him, as to what he gains by insulting a conductor like Gurer Aykal, whose devotion to Ataturk's republic is incontestable and who conducted gazillions of performances making crowds embrace classical music.

Could it ever be worth it for Fazil Say to disrespect someone who has done so much for the appreciation of classical music in Turkey?

As for Say, bringing a shady political reaction to Borusan’s decision to not work with him also deserves some good questioning. It does not, after all, happen very often in Turkey where the employers really stand tall for their employees. Borusan stood as an exception. Borusan indeed decided two years ago not to work with Say due to his personal misconduct. They renewed that decision and thought to give it a new try. That said, Aykal has been the musical director and principal conductor of the Borusan Istanbul Philharmonic Orchestra since 1999. In sum, Borusan’s decision to not work with Say this year has nothing to do with political pressure or any other potential economic gain, but that Borusan preferred Aykal — its own staff member — to Say.

Furthermore, if Borusan were to accede to political pressure by clipping its performers’ wings, they would not have played at Gezi Park at the hiatus of the protests. Here is the YouTube link of this performance, while Say played for Gezi in Vienna.

In brief, when those in the spotlight make it all about themselves, just as the politicians do, the public usually ends up being not well served.