Internationally renowned Turkish pianist Fazil Say faces an embargo in his own country as the government continues its censorship in the arts. 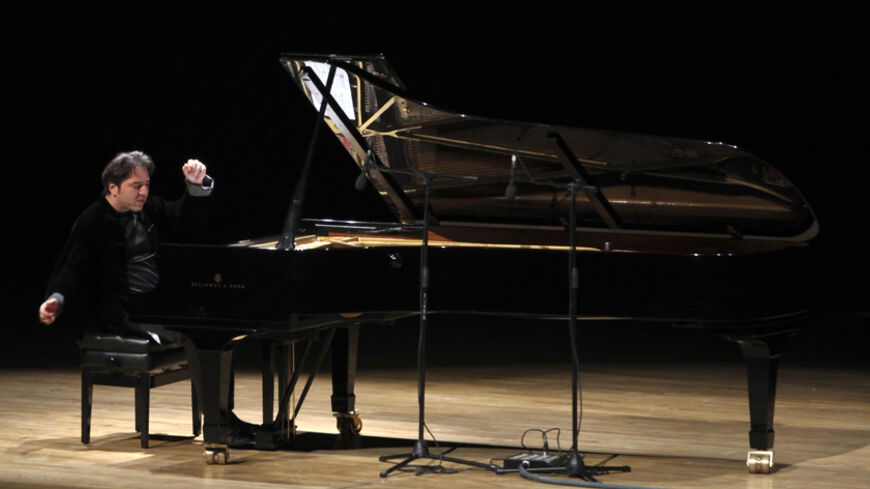 “Japan is one of [pianist] Fazil Say’s favorite countries. He flew there two weeks ago to give eight concerts. Tomorrow, he is scheduled to go to China and then to St. Petersburg and Zurich. Yet the people of Ankara can no longer enjoy his works, for the city’s most prestigious orchestra has removed Say from its program,” Radikal columnist Cem Erciyes wrote Oct. 21, reporting on the latest case of state censorship of the arts in Turkey.

Say, the internationally renowned pianist and composer, has often drawn the ire of the Justice and Development Party government, landing right on the fault line of Turkey’s political and social divide. And when this polarization spawns censorship and embargoes on the artistic community, the outcry is inevitably loud.

What happened, exactly? The Culture and Tourism Ministry removed Say’s works from the Presidential Symphonic Orchestra’s 2014-2015 program. The orchestra used to perform Say’s “Istanbul Symphony,” “Water Piano Concerto” and “Hermiyas: the Boy on the Dolphin.” According to news reports, the ministry verbally warned the orchestra management that it would not approve its program unless it dropped Say’s compositions. The demand was met before the season’s opening concert and the minister approved the program.

The move sparked protests from the artistic community. Say himself sounded both resentful and worried. “Over the past several months, I was robbed of my 14-year Antalya Piano Festival, and my annual concerts with the Borusan Orchestra were cancelled for some bizarre reason [which meant] an embargo on their part. Now the ministry has done the same,” Say told Radikal. “I present my work all over the world, but I’ve become unable to present it in my own country. What’s the purpose here?” Over Twitter, he asked, “On what grounds were my works removed from the orchestra’s program?”

The controversy quickly reverberated in parliament. Sezgin Tanrikulu, deputy chairman of the main opposition Republican People’s Party, submitted a parliamentary question, asking, “What was the reason for the Culture and Tourism Ministry to remove the compositions of Fazil Say — designated ‘culture ambassador' by the European Union in 2008 — from the program?”

The ministry’s undersecretary, Haluk Dursun, denied any embargo on Say and went further, saying the ministry continued “to uphold him as an artist.” The artistic community, however, was not mollified.

Erciyes, a Radikal journalist who closely follows the issue, believes the embargo is very real. He told Al-Monitor, “It’s obvious that the undersecretary is trying to soothe the reactions. Say wouldn’t have reacted as he did if he had not been informed he was excluded from the new season’s program. This is also the prevailing conviction in the musical community.”

“Given the government’s hostility toward opponents in any field, from the economy to the media, as well as the Culture Ministry’s discriminative allocation of financial support for [private] theaters and its attitude toward the state theaters, the censorship and embargo notions unfortunately become very real. What is truly unfortunate and dangerous, though, is that this attitude has now reached the point of blocking high-quality works from reaching the audience and inhibiting artists from creating freely,” Erciyes added.

Despite the undersecretary’s assurances, Say wrote a poignant letter to the government, which read: “I’m writing you from Beijing, where I have a concert tonight. While touring Japan, I learned that three works of mine had been removed from the program in Ankara, which led to protests. That’s not a pleasant situation.

“You know when you really become strong? When you uphold both the East and the West and preserve them in the best possible synthesis. That’s the reason why the Istanbul Symphony — now banned from being played in Ankara — has been performed all over the world. The Istanbul Symphony is a composition performed by an 80-strong Western orchestra, led by the ney, qanun, bendir and kudum. It tells about Istanbul with only music, no lyrics. With this composition, I won the 2013 ECHO Classical Music Award. Be proud of this, don’t get scared.

“If different lifestyles come under threat and intimidation, the result will be a very unhealthy social fabric. Don’t be afraid of art and artists. We’ve confronted each other for years. With this government, I never managed to get along. Other forms of censorship and concert cancellations kept bringing us to loggerheads.

“[I] give 100 to 130 concerts across the world each year. You may check if you wish. Try to understand. [I am] a Turkish citizen, an artist whose works are all about Turkey. You see, a couple of canceled concerts hardly changes anything for me. But your attitude is met with astonishment and contempt. Is that what you want?”

The spat between Say and government circles had peaked in 2012, when the pianist criticized corruption in Twitter messages that included a verse by Persian poet and philosopher Omar Khayyam. “I wonder if you have noticed that all the slimeballs, louses, posers, thieves and buffoons out there, they are all Allahists,” Say wrote in one of the posts, sparking outrage among conservatives. In 2013, he was found guilty of “openly denigrating religious values” and received a suspended 10-month jail sentence.

Gezi documentary left out of festival

Only a few weeks ago, the government’s shadow hovered over the Antalya Golden Orange Film Festival. The documentary “Love Will Change the Earth” — previously shown at the Istanbul Film Festival and the Adana Golden Boll Film Festival — was removed from the program even though the jury had selected it for competition in September.

The film, directed by Reyan Tuvi, was about the 2013 Gezi Park protests, which had seriously irked the government. It was removed on the grounds that it breached the Turkish penal code. In a statement denouncing the move, the festival’s preliminary jury said, “No matter its content, the film’s evaluation on the basis of the Turkish penal code and its removal from the list is a decision we consider to be censorship. This is unacceptable.”

When it comes to the art scene under direct state control, it has long been under strain. In the latest controversy, the general manager of state theaters, Mustafa Kurt, lost his post earlier this month because he refused to heed a censorship demand by the Culture and Tourism Ministry. His sin was to ignore the cancellation of a play by the Istanbul State Theater, which the ministry found to be of “vulgar” content. After Kurt stepped down under ministry pressure, chief production manager Ali Hurol, the Ankara state theaters’ general manager Sekip Taspinar and his deputy Serdar Kayaokay resigned in protest. The Professional Union of Theater Actors warned that “attempts to shackle arts have never succeeded, in any era of repression.”

The government’s main problem is that it perceives as a threat anything that is different and tries to control everything, a malaise that is becoming chronic and increasingly tangible in various fields. More and more Turks are growing anxious, not only about the future of the arts, but that of their children and themselves.