After a weekend of intense fighting in the old souk, Tripoli residents remain on edge, even though the Lebanese army has regained control for now. 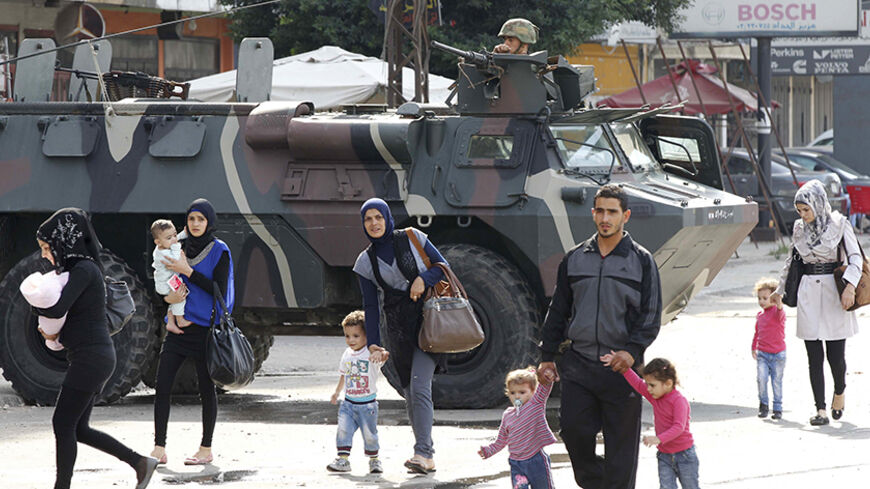 TRIPOLI, Lebanon — The Lebanese army took control of the Bab al-Tabbaneh neighborhood Oct. 27, so the militants are gone for now. But after a weekend of intense fighting in the old souk, the city remains on edge and residents are still fearful of further violence.

Shopowners spent the day cleaning up the mess from the streets. Broken glass covered walkways, water seeped from broken hoses and electrical wires hung low from the weekend's gunfire and bombings.

A men's casual clothing shop was heavily hit by an army tank during the Oct. 25 crossfire. Mohammed, the shopowner, said he was "too depressed" to comment but his souk shop neighbor, Rouf, said that Mohammed had the "worst damage."

As shopowners swept the sidewalks in front of their shops and pulled cracked glass from their window fronts, city workers came in to help shovel glass from the streets. Workers climbed on ladders trying to clear wire and debris from their shaded umbrellas. Bullet holes were evident along the walls of the nearby mosque and the garage doors of the closed shops.

Residents in the streets, horrified at the mess, agreed they fear it's not over. Early in the afternoon, two soldiers escorted a man away from the shops, though the man showed no signs of resistance. Then the army began lining the streets of the souk and making their way through the back corridors, signaling one another, pointing their weapons toward the rooftops and creeping through the shops. People stopped and asked who the army was looking for, though no one provided an answer.

Abu Di, another shopowner, told me the city was "too dangerous right now." He believes the Islamic State will try to take over Tripoli, but blames the son of a Jabhat al-Nusra leader for starting the fight after his father was detained by the Lebanese military. But Abu Di said he is "not afraid because I am Muslim" and still believes the "army is best" for Lebanon.

Not far from the souk is the Islamic Hospital where 25 victims were taken upon being injured during the weekend conflict. Dr. Wassim Darwiche, the hospital's medical director, reported "six mortalities."

One patient was given permission to speak with me. Army guards monitoring the main ward for the souk’s civilian patients escorted me. Ahamed Hamed, 28, from the Tabani neighborhood groaned in pain as a nurse helped him adjust his legs to a more comfortable position.

Hamed told me he had woken up at his sister's and went to the souk with his friends when a bomb hit suddenly. He was rushed to the hospital but “didn’t realize he was injured” because he “didn’t feel anything initially.” His leg was mangled and he adjusted his weight while he moaned in pain.

Hamed, who said his family comes frequently to visit him, is glad to have survived, adding that he “wants the Lebanese army to bring peace, we don’t want war.”

Darwiche said Hamed would have to stay for further surgery before he can be released.

Tripoli remains delicate and fearful of a takeover by the growing number of passionate Salafists in the area but are trying to remain hopeful the Lebanese army will keep the peace.

One man who did not want to be named told Al-Monitor, "Look, they are perfect," as soldiers made their way through the souk keeping an eye out for another day of possible unrest.