Over the past year, fighting has increased between Lebanon's Alawite fighters, who support Syrian President Assad's regime, and Sunni militias that support Syria’s rebels. In two neighborhoods of coastal city Tripoli, the factions increasingly see themselves as part of Syria’s worsening conflict. Josh Wood reports for Al-Monitor. 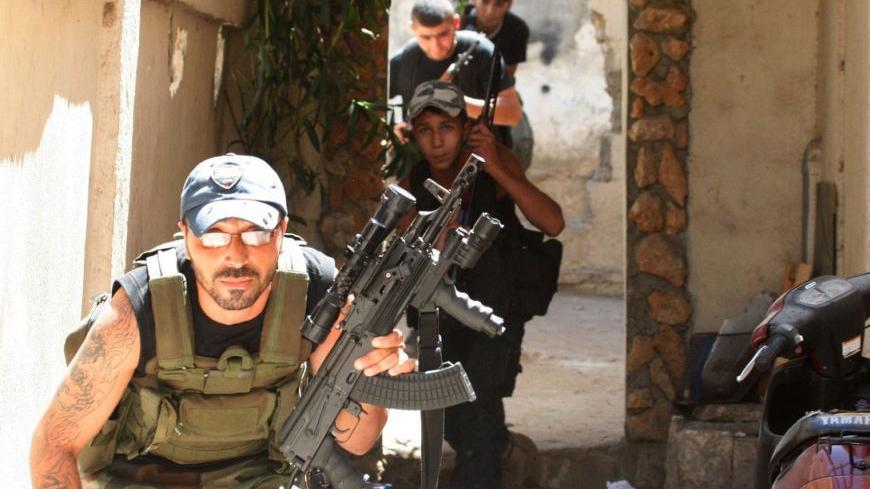 TRIPOLI, Lebanon — Soon after sunset on Thursday, Mohammed, a Sunni Muslim fighter in this seaside city of a half-million people, entered his commander’s sitting room toying with a small Russian-made hand grenade, rolling it in his hand and gently tugging on its ring with his index finger. Mohammed, with a headful of long dark locks and wearing a drab olive vest, had come to request three more grenades, hoping to toss them at the Alawite-majority neighborhood of Jebel Mohsen just a few dozen meters away.

Abu Bera, the commander of 50-60 fighters in Tripoli’s Bab al-Tabbaneh neighborhood, was hesitant. A cease-fire had technically been in effect since the night before, but that had not stopped the occasional exchange of potshots between rival Sunni and Alawite militias throughout the day on Thursday. To a degree, Abu Bera was sick of the fighting and did not want his fighters to help encourage a return to full-blown battle.

“There’s nothing good for us: there’s no work, my family is away and some people died,” Abu Bera said. “Nothing that happened is good.”

Over the past year, fighting has increased between Tripoli’s Alawite fighters, who support the Damascus-based regime of Syrian President Bashar al-Assad, and Sunni militias that support Syria’s rebels. Bab al-Tabbaneh, home to many of the Sunni militias, is a poor neighborhood that sits beneath the steep hill where Jebel Mohsen is located.

The fighters in these neighborhoods have begun to increasingly see themselves as part of Syria’s worsening conflict. Jebel Mohsen, for instance, is festooned with pictures of Syrian President Bashar al-Assad, while down at the bottom of the hill, the flag used by the Free Syrian Army is a common sight. A road quite aptly called Syria Street and the blocks behind it see much of the fighting. This fault line is the most visible and violent illustration of the Syrian civil war spilling over into Lebanon.

The latest round of fighting began on the weekend that marked the end of Ramadan. A group of children had playfully detonated fireworks to celebrate the Eid al-Fitr, the feast that celebrates the end of fasting. Then, someone opened fire. As usual, both sides blamed each other for beginning the battle. Since then, 16 people have died and more than 100 have been injured in the fighting, according to local media.

After denying Mohammed’s request for more grenades, Abu Bera went to a meeting of local Sunni militia leaders — who represented about 1,000 fighters, according to his estimate — to decide what to do. He returned home looking dejected. There had been an agreement to halt the fighting, though there were some dissenters.

“They don’t want to fight,” he said of his fighters, with a heavy burst from an automatic weapon nearby belying his hopeful statement.

There are plenty of reasons to not to want to fight. During battles, families are often evacuated from homes near the front line. With no garbage collection, refuse piles in the streets. Basic supplies like water, food and cigarettes are quickly exhausted from the shops near the front line, meaning a perilous sprint across the sniper alleys for those in need.

The frequent battles never have a winner or loser. While the Jebel Mohsen militias are outnumbered, they have an overwhelming geographic and strategic advantage over Bab al-Tabbaneh, and Sunni fighters seem to always be low on ammunition. Actual assaults — moving on territory held by the other side — are rare.

But they keep fighting. For most in Bab al-Tabbaneh, there is a deep-seated hatred for the Syrian regime and its supporters, stemming from when the Syrian Army seized their neighborhood in the 1980s during the Lebanese civil war.

“They hate Jebel Mohsen, they hate anybody with Bashar al-Asad. For every house in Tabbaneh, there is a shaheed [martyr] … or two,” said Abu Bera.

While all fighters share a hatred of the Syrian regime and its Lebanese allies, boredom seems to drive the urge to fight for some at times. While battles result when militia leaders decide to mobilize, it seems that many fighters often take matters into their own hands.

The mutual hatred between both sides, the lack of a final resolution to battles, combined with growing tensions over Syria – and occasional boredom – ensure that the clashes keep happening.

As the night progressed, Abu Bera slept and some Sunni fighters continued firing in Jebel Mohsen from concealed sniper positions. For hours, the steady staccato of Bab al-Tabbaneh’s snipers at work was unable to provoke a response. Finally, in the early hours of Friday morning, the response came, with incoming bullets sending sparks flying on the balconies across the street from the sitting room where Abu Bera slept soundly. Even as the fighting escalated to the use of rocket-propelled grenades, Abu Bera slept. (“it is like music to me while sleeping,” he said later of the sound of the battle.)

It was only when his phone rang that he woke up. The caller had news that Khaled Baradei, a 28-year-old Salafi fighter and leader, had been killed in Riva, another neighborhood bordering Jebel Mohsen. The cease-fire was voided and the battle was back on — Abu Bera would have to ready his forces.

With streetlights in the neighborhood cut in an attempt to protect against snipers, Abu Bera’s fighters deployed. Only muzzle flashes, tracer bullets, impacts of rocket propelled grenades and the red glows of lit cigarettes broke the darkness.

The fighters gathered on a corner under cover, sitting in a circle as they readied their weapons. Across the street, two Lebanese Army armored personnel carriers sat idle as bullets crashed into surrounding buildings and the Sunni gunmen convened within sight. Some of the fighters worked on priming a problematic Belgian-made Energa rifle-launched anti-tank grenade. Others tuned their walkie-talkies into a channel used by the Alawite militias, listening to a man they said was Rifaat Eid — the head of the Arab Democratic Party, the main Alawite political party — urging his fighters not to fire near Lebanese Army soldiers for fear that they would return fire.

At first light, thick black smoke streamed from the front line in Jebel Mohsen down the street and the intensity of the battle increased. Several blocks away from Abu Bera’s fighters, another group of militants who said they were partisans loyal to Future Movement leader and former Prime Minister Saad Hariri were sidelined from the battle after they had exhausted most of their ammunition. One gunman — no older than 20, wearing plaid shorts and a striped tank top — had five rounds left for his Kalashnikov. Another had only 30 bullets left for his Belgian-made FAL rifle. None had enough to sustain a firefight. They chatted and fooled around as incoming rocket-propelled grenades whistled overhead trying to silence a Sunni sniper across the street. More ammunition was on the way they said, but it would take two hours to arrive.

A few hours later, back where Abu Bera’s fighters were stationed, some of the Army’s armored personnel carriers belonging to the 12th Infantry Division began firing their .50-caliber machine guns at Jebel Mohsen. After each long burst, the Sunni fighters would cheer and shout “Allahu Akbar!” The Sunni fighters used the involvement of the military to push their attack, beginning to ready rocket-propelled grenade tubes and using the Army’s fire as cover to duck down exposed alleys to the front.

The relationship that the Sunni fighters here have with the Lebanese Armed Forces is complicated and confusing. While there was no issue made of the fighters firing within sight of the 12th Infantry, when convoys of Humvees and armored personnel carriers belonging to a unit of the Lebanese Army’s Special Forces thundered down Syria Street, fighters would rush to hide their weapons. In engagements earlier this year, Sunni fighters showed contempt for some Army units and admitted to opening fire on them at times. In May, Abu Bera showed a video of an unidentified unit of the Lebanese Army opening fire on the buildings lining Syria Street.

This time around though, one group of Sunni fighters admitted to buying ammunition at a cut rate from a sympathetic Lebanese soldier stationed on the street.

In general, the Lebanese military tries to stay out of intra-Lebanese conflicts. While many Lebanese respect the army for its cross-sectarian makeup, this same facet also means that its involvement in conflicts can prove dangerous if soldiers are more loyal to their sectarian leaders than the institution of the weak and often powerless state.

On Thursday evening, the Lebanese government said that it had approved the “political cover” needed for the Army to go into Bab al-Tabbaneh and Jebel Mohsen and quell the fighting. On Friday night, the government said that arrest warrants had been issued for all fighting in the conflict. In Bab al-Tabbaneh, though, there appeared to be no effort at all to stop the Sunni fighters.

In past interviews, Rifaat Eid — the Alawite leader — has portrayed the army as a defender of Jebel Mohsen, saying that they fire on Bab al-Tabbaneh from his hilltop neighborhood. Because of the intensity of the firefight on Friday, it was impossible to see whether Lebanese Army positions in Jebel Mohsen were firing on Bab al-Tabbaneh, though Sunni residents and fighters claimed only the Alawite militia was involved on the hill.

Any overt partisan action by members of the Lebanese Armed Forces is a dangerous prospect, especially at a time when Lebanon is on edge after the kidnappings of Syrian nationals in the country by the Moqdad clan and the recent arrest of former Information Minister Michel Samaha, who is accused of aiding Damascus in plots to destabilize Lebanon.

While the government has promised to contain the violence in Tripoli, it has been difficult. As of late there has been a sense that the Lebanese security services are unable to prevent instability from reaching other areas.

On Friday morning, for instance, local media reported that gunmen burned down several shops owned by Alawites and others in downtown Tripoli.

In the afternoon, about a half-dozen motorscooters with Sunni gunmen armed with light machine guns and assault rifles slowly approached Tripoli’s central Nour Square. Civilians and military personnel stationed at the square – not used to seeing Tripoli’s instability spreading to its more affluent quarters – stopped and stared at them as they circled the roundabout and drove away.

While the situation has quieted in Tripoli compared to the intense fighting seen several days ago, continued violence threatens to return the city to another large battle. On Sunday, local media reported that sniper activity and occasional rocket-propelled grenade attacks continued, resulting in the death of one civilian.

EDITOR'S NOTE: All the names in this story have been changed or shortened at the request of those interviewed.

Josh Wood is a journalist based in Beirut. He regularly contributes to the International Herald Tribune and Esquire Middle East. 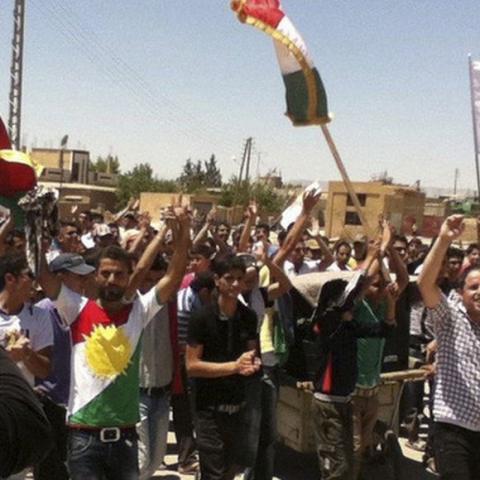 In Syria, Kurds Carve Out Territory of Their Own