Sweden's decision to recognize the State of Palestine will boost the Palestinians' bid for recognition by other countries. 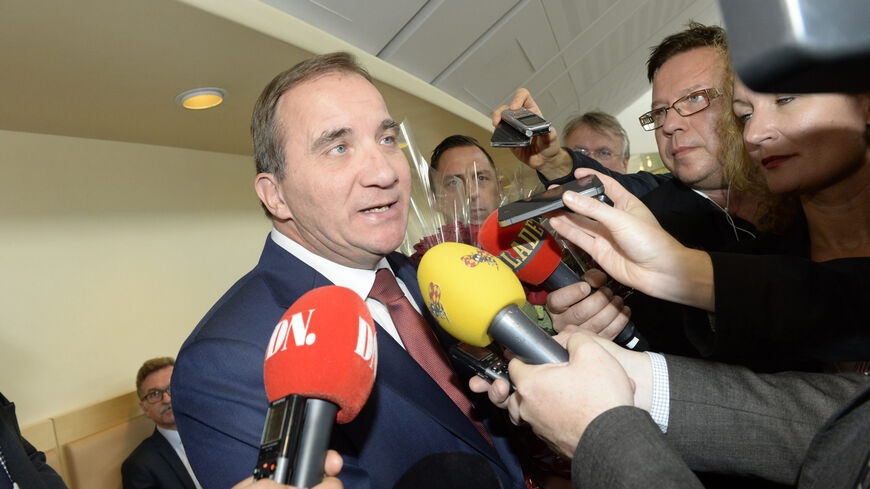 For Swedes and Palestinians who have followed Swedish foreign policy toward Palestine, the announcement in Stockholm of the government's intention to recognize the State of Palestine came as no surprise.

In his inaugural speech Oct. 3, Prime Minister Stefan Löfven explained his administration’s decision, stating, "The conflict between Israel and Palestine can only be resolved through a two-state solution, negotiated in accordance with the principles of international law. It must guarantee the legitimate demands of both the Palestinians and the Israelis for national self-determination and security. A two-state solution requires mutual recognition and a will to coexist peacefully. Therefore, Sweden will recognize the State of Palestine.”

Swedish diplomatic sources contacted by Al-Monitor said that the decision has been a long time in the making, but had gained momentum in the past few years. The Swedish Social Democratic Party (SAP), which won general elections held in September, had publicly stated in its 37th Congress platform in 2013 that it would recognize Palestine if it took power, a Swedish diplomat said. The SAP and Fatah have strong ties and are both part of the Socialist International. In October 2013, the SAP's Stockholm branch signed a twinning agreement with Fatah’s Jerusalem branch.

The angry response by the United States and Israel to the Swedish announcement did little to change Swedes' minds. Foreign Minister Margot Wallström’s statement that “it’s not the United States that decides our politics” is a far cry from the positions of the previous pro-US Swedish government.

In 2008, Foreign Minister Carl Bildt had participated in a meeting in New York of the Ad Hoc Liaison Committee, the main body for international coordination of state-building aid to the Palestinian territories and an important forum for the Middle East peace process. Nonetheless, in 2012, Bildt opposed voting for the State of Palestine at the United Nations, a position that at the time triggered opposition from the Social Democrats and Greens, who make up the current governing coalition.

Wallström is an experienced diplomat who has spent years at the UN secretary-general’s office in New York and at European Commission headquarters in Brussels. Swedish diplomatic sources say that although her CV is highly respected, she is relatively new to the Middle East. The point person for Swedish diplomacy will be Minister for State Annika Bjurner Söder, who has abundant Middle East experience and has visited Palestine and the rest of the region many times. Söder previously served as executive director of the Dag Hammarskjöld Foundation, Swedish state secretary for International Development Cooperation, Foreign Ministry spokesperson and foreign policy adviser to prime ministers and foreign ministers.

Sweden’s decision will have a huge impact on Europe. A few Eastern European member states had recognized Palestine during their years under communist governments, but in 2012 the majority of European Union countries abstained from voting for Palestine at the United Nations. The British Parliament is set to debate and vote on recognizing Palestine on Oct. 13. In addition, France has been asked by Palestinian President Mahmoud Abbas to recognize Palestine. Meanwhile, Sweden's Scandinavian neighbors Denmark and Norway, also NATO members, are unlikely to follow in its path any time soon.

One of the most important aspects of Sweden's recognition will be the status of the Swedish mission in Jerusalem. For decades, even before the 1967 occupation, Sweden — along with Belgium, France, Italy, Spain, Turkey, the United States, United Kingdom and the Vatican — had consulates in East Jerusalem that Israel tolerated. Now, since Swedish recognition also includes Jerusalem as the capital of Palestine, the natural expectation will be that move will affect the status of Sweden's mission in Jerusalem.

Having an embassy in Ramallah will not be acceptable to the Palestinians, who will insist on the need to upgrade Sweden's Jerusalem mission. On the other hand, any change in the status quo toward a full-fledged embassy will most certainly be rejected by Israel. It is unclear how this issue will be finessed. The Swedes might appoint an ambassador to Palestine and have the envoy work out of Stockholm or a regional capital.

After the SAP's eight years in opposition, party leader Löfven wanted to make a big bang, to demonstrate that his government is different and independent of Washington. Thus, while Swedish organizations, political groups and citizens have been active on the Palestinian solidarity front for years, the Swedish decision has some political motivations behind it. Many expected that Löfven would recognize Western Sahara, which his party has also pledged to do, but he instead chose to recognize Palestine first.

The Swedish decision has effectively dismissed the argument that the State of Palestine must be born through negotiations and that no country should set preconditions regarding the results of talks between Israelis and Palestinians. The ramifications of this decision will go a long way toward encouraging hesitant countries to take a step in Sweden's direction and ultimately strengthening Palestine’s bid for statehood at the UN Security Council.