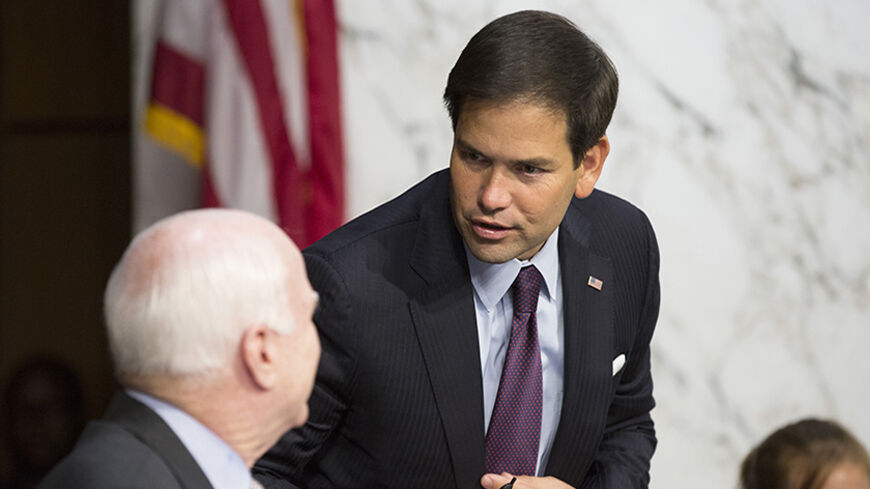 Sen. Marco Rubio, R-Fla., speaks with Sen. John McCain, R-Ariz., as US Secretary of State John Kerry testifies during a Senate Foreign Relations Committee hearing on "US Strategy to Defeat the Islamic State in Iraq and the Levant" on Capitol Hill in Washington, Sept. 17, 2014. - REUTERS/Joshua Roberts

Two hawkish senators on Oct. 22 slammed Secretary of State John Kerry’s $156 million pledge to the UN agency for Palestinian refugees, foreshadowing a showdown over funding when Congress returns after the midterm elections.

The UN Refugee and Works Agency for Palestine Refugees in the Near East (UNRWA) has long been in Republicans’ cross-hairs, in part because it recognizes 5 million descendants of the Palestinians expelled from their lands in 1948 as refugees. During this summer’s fighting in Gaza, the agency caused a bipartisan uproar when it turned over to the local authorities Hamas rockets that it had discovered stored at three of its schools.

In a letter to Kerry, Sens. Marco Rubio, R-Fla., and Mark Kirk, R-Ill., said they were “dumbfounded” by the State Department pledge announced Oct. 12 as part of the Cairo donor conference to rebuild Gaza. The United States is UNRWA’s largest bilateral donor.

“This blind support sends the wrong message to an institution that has already become far too dependent on the largesse of the American taxpayer and repeatedly failed to ensure that its facilities and resources are not used by terrorists who wish to sow chaos and instability rather than aid the Palestinian people,” they wrote.

“We will not support the provision of future U.S. assistance to entities or projects in Gaza,” they added, “unless the State Department assures Congress that UNRWA or the relevant recipient entity has imposed independently audited accountability measures to verifiably prevent any U.S. assistance from aiding, directly or indirectly, extremists’ efforts to rearm or lay the groundwork for future attacks against Israel.”

Funding for UNRWA is expected to be a sticking point when lawmakers prepare their annual spending bill at the end of the year. The current stop-gap measure expires Dec. 11.

At the Cairo conference, Kerry pledged $414 million in US assistance to the Palestinians. That includes a $74 million contribution to UNRWA’s Gaza Flash Appeal and another $84 million to help the agency address other emergency needs in the West Bank and Gaza.

House Appropriators in June passed a bill that would restrict funding for the organization unless the secretary of state reports that it is not siding with the Palestinians against the Israelis. The equivalent bill in the Senate does not contain such restrictions, but this summer’s events — including UNRWA’s sharp criticism of deadly Israeli strikes against militants firing near its schools — have also angered powerful Democrats.

“When leaders and organizations of the United Nations blur the clear distinction between a nation-state defending itself and a terrorist organization attempting to murder civilians, Americans take note,” Senate Foreign Relations member Ben Cardin, D-Md., said in joining Rubio and Kirk in August in demanding a State Department probe into UNRWA’s actions during this summer’s fighting. “When an organization funded in part by the US suggests that the two are morally equivalent, US taxpayers take note.”

The State Department says the agency provides crucial help to Palestinian refugees not just in Gaza but also in the West Bank, Jordan, Lebanon and Syria.

“UNRWA is operating in a very difficult situation and there weren’t a lot of good options here. And we are working with them to try and figure out a better outcome in the future,” spokeswoman Marie Harf told reporters back in June. She added that the agency “does very important work in terms of the humanitarian situation, not just in Gaza but elsewhere.”

Still, this summer’s events have sparked several efforts to further curtail US funding.

Longtime UNRWA critic Ileana Ros-Lehtinen, R-Fla., the chairwoman of the House Foreign Affairs panel on the Middle East, introduced legislation last month that would prohibit US funding unless the secretary of state certifies that the agency’s personnel and resources aren’t aiding Hamas in any way. Rubio filed nearly identical legislation in July, while also taking aim at the Palestinian Authority and the UN Human Rights Council.

“The United Nations has turned a blind eye to Hamas’ use of its facilities to terrorize Israel,” Rubio said at the time. “But the targeting of innocent Israelis by Hamas and other terrorist groups cannot be denied, and it cannot be ignored — not by the United Nations, and certainly not by America.”