A Palestinian journalist is one of many Palestinians who are subjected to discriminatory policies at the Rafah border crossing, to get to Cairo International Airport and board an international flight. 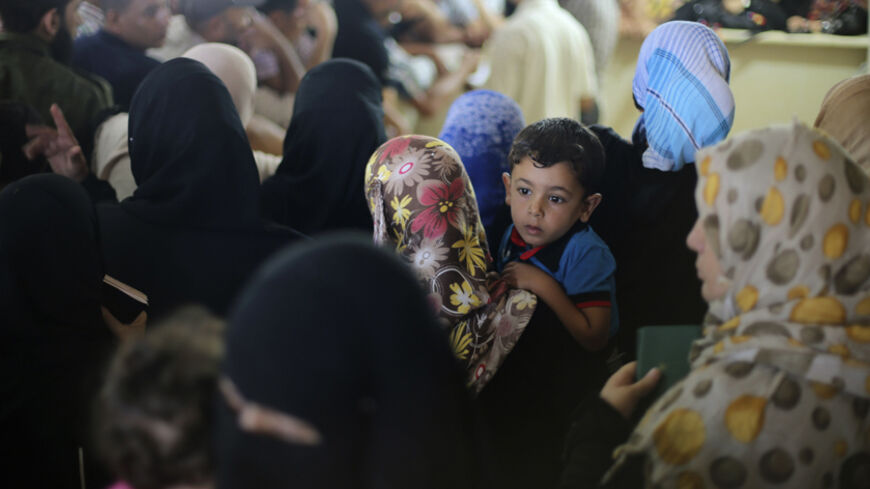 A Palestinian boy, hoping to cross into Egypt with his family, is held by his mother as they wait at the Rafah border crossing between Egypt and the southern Gaza Strip, Aug. 12, 2014. - REUTERS/Ibraheem Abu Mustafa

Meral, a pseudonym, 28, from the Gaza Strip, has traveled the world and returned to her hometown in Gaza. But her account of the trip she took last week and related to Al-Monitor was so traumatic that it might be the last one she attempts to take out of Gaza.

A freelance journalist who works with leading global media outlets, Meral was invited to a media conference in the Lebanese capital, Beirut. The trip out of Gaza was tricky, she said. One needs to organize a trip out of the Gaza Strip weeks in advance. Normally, the Rafah border crossing — still controlled by Hamas — has two days reserved for students and two days for those wishing to perform hajj or umrah in Saudi Arabia. Business and leisure trips simply do not have their own day at the border, so these trips require careful planning ahead of time.

Meral knew that she needed a visa to enter Lebanon, but when she was notified that she could leave on Oct. 1, she decided to leave then in the hope that the visa to Lebanon, applied for long ago, would arrive within the days she would be waiting in Cairo. Had she turned down the Gazan government’s offer to leave on Oct. 1, it would have been uncertain when she would have been able to leave next. This could have taken weeks, and she would have certainly missed attending the conference on journalism and social media sponsored by Canal France International (CFI) and the Samir Kassir Foundation.

The trip began at 5 a.m. on Oct. 1. Meral was at the Rafah border crossing long before the official opening time of 7:30 a.m. But it was only by 10 a.m. that she managed to leave the Palestinian side on the first bus and arrive at the Egyptian side of the crossing. When her passport was finally checked, she was told to wait. By noon, she was told she was not allowed entry into Egypt. Her sister, Rania, who wanted to go to the US Embassy in Cairo, was told she could leave and that she would be allowed 72 hours in Cairo. Meral decided to appeal and pleaded with the Egyptian officials, a representative of the Palestinian Embassy to Egypt and a Hamas official to intervene, but with little success. Meral was eventually allowed to talk to an Egyptian officer who scoffed at the invitation letter from the Lebanese foundation. He agreed to let her travel to Cairo International Airport on what is referred to as “tarheel,” literally translated as "deportation." Having heard so many stories about people being stuck at the airport for days, Meral rejected the offer and tried another avenue.

“I am married to a Turkish journalist,” she told the Egyptian officer in the hope that this would allow her to enter Egypt. She showed her passport to prove it. However, mentioning Turkey was the wrong thing to do, as Egypt and Turkey are facing political challenges. Meral's permit to travel on a transit visa was taken away and she was ordered to return to Gaza. In another round of pleading, she told them that her family home in Beit Lahia, north of Gaza, was destroyed during the war on Aug. 2. But nothing seemed to work, and finally by 5 p.m. — just before the border crossing was set to close — she was told that she had two options: "tarheel" or return to Gaza. Knowing that she would otherwise not be able to attend the conference in Beirut, she reluctantly accepted the “tarheel” option.

Eight hours later, at 3 a.m. on Oct. 2, Meral and others in the same situation were taken to a windowless basement at Cairo International Airport. She had brought an Egyptian SIM card and had bought credit including 3G so she could communicate with the rest of the world and especially with Rania, who had 72 hours of freedom in Cairo. Upon arrival, Meral met a Syrian Palestinian family that had been stuck in the basement for two months. They gave her one of their blankets, which she said was not very clean. There were no sleeping areas, showers or regularly available food. The Egyptian guards had to be bribed to get them cafeteria food. The worst moment for Meral, she recalled, was when tourists who had been vacationing at the Sharm el-Sheikh resort, on the southern tip of the Sinai Peninsula, were transferred to the transit area via their windowless basement. She remembered the way the tanned Europeans had looked at them with surprise at their desperate state.

Three days later, Meral succeeded in getting the coveted visa to Lebanon and a valid plane ticket, the two documents needed to be allowed into the regular transit area of Cairo International Airport. By 5 p.m. on Oct. 5, four days after leaving her Gaza home, Meral was on a flight to Beirut after being treated, according to her, “like a dog.”

Meral said that the Egyptian policy toward Palestinians has become more strict, especially for those wishing to travel to Arab countries, since the creation of the unity government. Efforts to place the Presidential Guard and Europeans on the Palestinian side of the crossing have been delayed as Hamas officials have refused to give up power and control.

Meral, who has always said that she would never leave Gaza permanently, understands why so many young Palestinians join radical groups or risk death on boats while illegally emigrating to Europe. Meral also echoed the importance of Palestinians having their own airport so that they wouldn't have to go through the discriminatory practices of the police at the border crossings. She is now seriously considering moving to Turkey and visiting her family in the Gaza Strip when travel conditions improve.