Rebel militias have killed at least 35 prominent civil society figures and kidnapped countless others this year as part of a greater campaign of violence in the absence of any central police force in many parts of Libya. 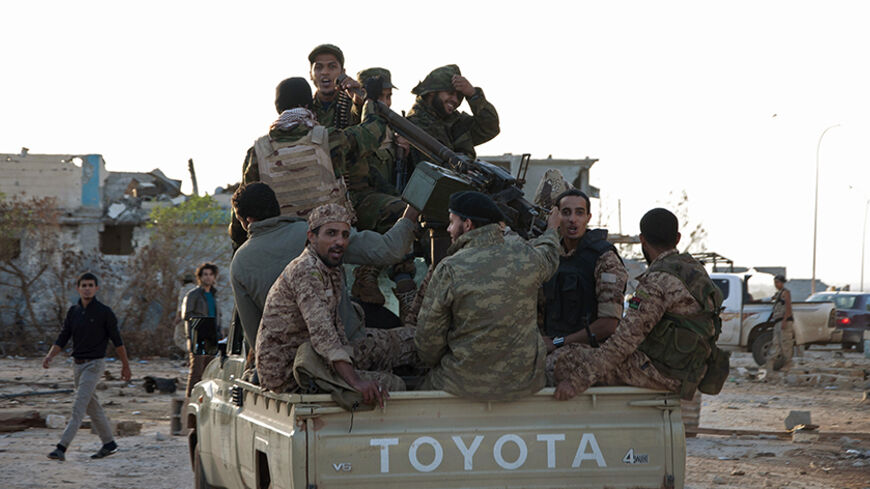 Members of forces loyal to former Gen. Khalifa Hifter ride in a truck in the Benina area, east of Benghazi, Oct. 24, 2014. - REUTERS

Nader Elgadi has captured the outcry against militia violence through his camera lens. Elgadi, a 27-year-old Libyan activist, attended his last demonstration in Tripoli on July 26, 2014. After documenting residents contesting the rule of militias vying for control of the country, he headed home to secure his photos and drop off his camera. When he left again late that afternoon, he was abducted and taken to the outskirts of the city.

“I couldn’t see anything,” Elgadi told Al-Monitor, “but I knew from their accent that my abductors were from Tripoli.”

Accused of being an Operation Dignity supporter — a pro-government military operation launched against Islamist brigades united under the name Dawn of Libya — he was kept in a makeshift prison for further questioning until his release the next evening. He was one of the lucky ones.

According to activists monitoring the death toll from outside the country, at least 35 prominent civil society figures have been killed this year. Rebel militias have enforced their own systems of justice following the collapse of the judiciary during Libya’s 2011 revolution. While kidnapping is commonplace, armed gangs are also assassinating civil activists as part of a greater campaign of violence, according to activists and Libya analysts.

But without any central police force in many parts of the country, bringing perpetrators to justice remains an impossible task.

“We don’t know who’s responsible for each kill, but certainly the violence is systematic,” said Hassan Al-Amin, a human rights activist and former member of the General National Congress (GNC), to Al-Monitor.

The GNC failed to function as a coherent body after it assumed power from the National Transitional Council in August 2012. Benefiting from militia control of illicit and state resources, Amin said, too many members were lobbying for armed gangs and fanatic groups.

In August, Dawn of Libya took over the capital to secure the GNC’s hold on the country after its term expired, to prevent the newly elected House of Representatives (HoR) from assuming power.

After the outcome of the elections, Dawn of Libya accused the HoR of having links to former dictator Moammar Gadhafi. As the HoR sought safety in the far east city of Tobruk, notable activists refused to abandon their communities.

Tawfiq Ben Massoud, a 19-year-old blogger and prominent civil society figure, knew his life was in danger for defying militants in Benghazi. Reluctant to flee, he was killed in his car on Sept. 19 by unknown gunmen. And though he was an outspoken opponent of militant Islam, it’s still unclear who was responsible for his death.

“Anybody could have killed Tawfiq and then blamed it on Islamists,” said Ayat Mneina, a fellow activist and a founder of the Libyan Youth Movement. “Nobody is committing these crimes and then claiming responsibility.”

Salwa Bugaighis, another prominent human rights activist, was killed in Benghazi at the onset of the last elections, when hooded militants broke into her house and shot her several times.

Claudia Gazzini, Libya’s senior analyst for the International Crisis Group, says that while militants have targeted members from all sectors of society, armed groups trying to disrupt the democratic process have focused on people like Bugaighis.

“Salwa was a target. She was murdered for encouraging people to vote,” Gazzini told Al-Monitor.

Militants have also used social media to monitor the activity of civil society leaders and locate their whereabouts. On Oct. 18, young activists flagged a Facebook page that shared their names, photos and addresses. Though the page was removed, online platforms hardly remain secure for those in the country. Elgadi told Al-Monitor that after his release, he received several death threats online.

“They were monitoring me. Perhaps my abduction was a warning to flee the country,” said Elgadi.

Together with each murder’s devastating effects, poverty and corruption have equally damaged the growth of civil society. With over a third of Libyans living below the poverty line and some militias receiving salaries from the state, many young men have opted to join armed groups.

“Militias are destroying the country by recruiting our youth. For those desperate, money is very enticing,” Mneina told Al-Monitor.

Incorporating armed groups in the military has been a widely talked about but questionable solution. Without any clear command structure and criminals penetrating the ranks of each group, establishing a national army including the militias wouldn’t alleviate Libya’s struggles.

In climates of war, there appears to be little space for civil society to grow. As militias tear the social fabric apart, the GNC refuses to transfer power to the House of Representatives. Struggling to build a political consensus and no longer able to recognize their home, activists risk their lives for a fading vision of their country.

“We need to dismantle these militias. How can civil society make any headway when people are dying for preaching human rights?” asked Amin.