Though Israeli President Reuven Rivlin has acknowledged the 1956 massacre there, many residents of Kafr Qasim will not be satisfied with anything less than an explicit apology from the state. 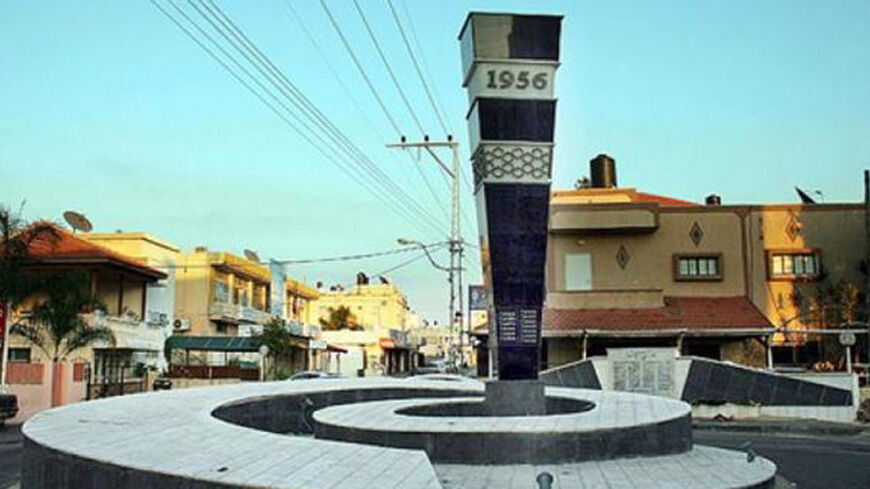 The memorial for the 1956 massacre committed by Israeli border police in Kafr Qasim is shown in this undated picture. - Twitter/@haaretzcom

Israel’s President Reuven Rivlin has had some noxious epithets hurled at him, such as “lying Jew-boy,” “dirty lackey” and “traitor.” He's been told, “Damn you, Arab agents,” “You’re a zero” and “Go be president of Gaza,” he said in his speech from the Knesset podium at the opening of the winter session Oct. 27.

The president didn’t list the specific events that angered his critics, but the residents of Kafr Qasim are convinced that Rivlin was referring (at least partly, but perhaps principally) to his participation in the previous day's ceremony commemorating 58 years since the massacre in the village.

On Oct. 29, 1956, the first day of the campaign int, a border police battalion was sent to Kafr Qasim to enforce the curfew imposed on all the villages of the Triangle, in preparation for a possible war with Jordan. Col. Issachar Shadmi, the commander of the brigade positioned in the region, decided on his own to move up the curfew's start time without warning the residents in advance. The results were tragic: When residents returned to their homes from work, 43 were shot to death, including women and children. Another four were killed in the village and many others were wounded.

The State of Israel, led by Israel's first Prime Minister David Ben-Gurion, at first tried to hide the massacre from the public, but without success. Due to public pressure, 11 officers and soldiers were put on trial. Eight of them were convicted and received prison sentences of seven to 17 years. But after only one year, then-President Yitzhak Ben Zvi granted them a pardon and they were released. Since then, the residents of Kafr Qasim have been demanding that the State of Israel explicitly apologize for the massacre.

“A terrible crime was committed here,” Rivlin said this week in Kafr Qasim. “Illegal orders topped by a black flag were given here. We must look directly at what happened. It is our duty to teach this difficult incident and to draw lessons."

This is the first time that an Israeli president has participated in a memorial ceremony for the Kafr Qasim massacre and used such decisive words to describe it. True, former President Shimon Peres visited the village seven years ago, but he limited himself to a feeble statement: “An exceedingly harsh incident took place here in the past, an incident that we much regret.”

Despite Rivlin's sharp, clear words, the residents of Kafr Qasim were disappointed by his speech at the memorial ceremony. As far as they are concerned, they are still waiting for the State of Israel’s explicit apology and for it to accept responsibility for the deed. Over the years, family members of the victims have demanded that the State of Israel recognize the dead and wounded as terror victims (“victims of hostilities”), but the term they are using is erroneous. They are not terror victims, but residents who were killed in an action by a military unit under illegal orders.

Kafr Qasim Mayor Adel Badir initiated Rivlin’s visit in his town, believing that the time had come to clear the heavy cloud that has hung for almost six decades over the Kafr Qasim massacre. Badir hopes that Israel will officially investigate the massacre and recognize the fallen as terror victims.

The text of his interview with Al-Monitor follows:

Badir:  I do really appreciate the president’s visit. I appreciate the words he said, his condemnation of the massacre, his acknowledgement of the pain, the recognition that a crime was committed. But on the other hand, there was no explicit apology as the families of the victims had anticipated. A sentence like "I apologize in the name of the State of Israel for the 1956 massacre" was not uttered. Nevertheless, if there’s anyone courageous enough to say it, it’s President Rivlin. Beyond an apology, we have the matter of a vicarious liability of the state, the army, the Israeli government. The state must acknowledge its responsibility for the massacre. An order was given to several sectors, yet it was not carried out. But in the Kafr Qasim sector, it was carried out. What echelon gave that order? We want a commission of inquiry to be formed to probe this issue.

Al-Monitor:  You used the term “vicarious liability.” Is the goal compensatory payment for the families of the victims, or would an explicit apology be enough?

Badir:  As citizens of the state, the symbolism of assuming responsibility is important to us. The state assumes vicarious liability for its soldiers and it must accept responsibility for their deeds and apologize. To us, the second and third generations of the victims, that is more important than money and compensation.

Al-Monitor:  How did the residents view the president’s participation in the memorial ceremony?

Badir:  The vast majority of the residents viewed it as a historic step. That is still not like turning over a new page, but a courageous president came here and did something. I believe that Rivlin hasn’t said the last word yet, and there will be a direct, explicit apology and assumption of responsibility. Not indirectly, and not under a veil.

Al-Monitor:  Do you expect the president to apologize explicitly?

Badir:  The president is a pre-eminent individual in Israel and we appreciate and respect his courageous act. But it is the executive authority that has the jurisdiction to say the last word. Official recognition of the massacre must be made by the Israeli government and its head.