Israel's war with the US

As Israel-US ties continue to deteriorate, Israel is dealing with two other fronts: the Lebanese border where an explosive device just wounded two soldiers, and the mysterious explosion at the Parchin nuclear plant in Iran. 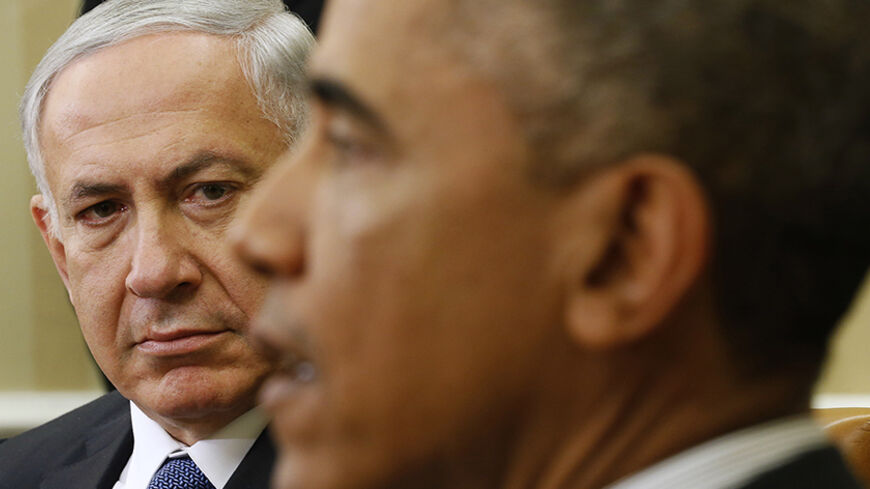 Three wars made blips on Israel’s radar screen this week, and then disappeared.

Israel conducts two out of the three against its will. One is the war against Iran’s nuclear plans, which played on the imaginations of many observers Oct. 6 when reports emerged about a tremendous and mysterious explosion at the secretive Iranian site in Parchin. The second, another quiet war, is waged against Hezbollah. It made an appearance this week for a brief moment in Israeli and Lebanese headlines when IDF forces confronted Lebanese armed operatives who entered Israeli territory at the Mount Dov area on Oct. 5. The third war is the one that Israel is waging of its own choice, and that is the war with the United States.

Within this framework, Prime Minister Benjamin Netanyahu did not content himself with hurling sharp criticism at the US administration Oct. 1, during his visit to New York and Washington. He added insult to injury at the beginning of this week when, in an interview with CBS, Netanyahu argued that the US condemnation of Israeli construction in Jerusalem’s Givat Hamatos neighborhood contradicts "American values." Netanyahu’s allegation led to the US response that was unprecedented even against the background of the current "war" between Jerusalem and Washington. White House representatives labeled Netanyahu’s statement as “odd” and specified the “American values” on which the historic US support of Israel, including the financing of the Iron Dome air defense system, is based. It appears that at this rate, in the next round, the White House will progress from the use of “odd” to “bizarre” with regard to Netanyahu’s inexplicable behavior.

Let’s start with Parchin. No one in Israel has taken responsibility for that explosion, and officials have awkwardly distanced themselves from the entire affair. Intelligence Minister Yuval Steinitz appeared on Israeli television on the night of Oct. 6 and said, “I don’t know if there was an explosion and if so, where it was exactly.”

This is the same Steinitz who flooded the media Sept. 26 with news of clandestine Iranian activity in Parchin. He did this in response to news of a US proposal for an arrangement with Iran on the nuclear issue. Steinitz expressed Israel’s uncompromising objection to leaving thousands of operative centrifuges in Iran (4,700 active centrifuges and a few thousand more that can be operational within a few weeks). He compared the proposed agreement to the failed attempt with North Korea in 2007 and detailed the information Israel has about Parchin.

“Israel has highly reliable information that Iran conducted tests on internal neutron sources at the Parchin military base,” he said, and added that the “only possible purpose of such internal neutron sources is to ignite the nuclear chain reaction in nuclear weapons." A few days earlier, Steinitz had released a statement with more detailed information about activity in Parchin. He said that during 2000-2001, Iran had set up a special test site in Parchin with a large metal chamber for conducting explosion tests, designed to develop mechanisms for nuclear weapons. Over the subsequent years, Iran allegedly used this facility for tests, simulating implosion methods for nuclear weapons, including work on a neutron initiator that could trigger them. These kinds of experiments, naturally, include nuclear material such as uranium.

"It is important to emphasize,” Steinitz said, “that the use of such material has no 'dual use' explanation, since the only possible use for internal neutron sources is to ignite the nuclear chain reaction in nuclear weapons."

Is Israel behind the explosion in Parchin? The Arab world is convinced that it is. The Western intelligence organizations still don’t know. It is important to note that there still has been no verification of the exact location of the explosion, or the damage it caused, or possible losses in human life (one of the Israeli opposition websites announced that a prominent Iranian nuclear scientist was killed in the blast). One thing is sure: The secret war between Israel and Iran continues unabated.

In the Lebanese sector, there is a similar situation: a quiet war and a Wild West arms race have been waged in recent years between Israel and Hezbollah. This conflict includes many events that fly under the radar of the media. One of these made a brief appearance this week, when a squad of armed Lebanese fighters crossed the international border close to Mount Dov. The squad was spotted by an IDF infantry Golani force, which opened fire on them. Apparently, one of the Lebanese fighters was wounded and the squad retreated back into Lebanese territory. The IDF assessment is that the men belonged to Hezbollah or the Lebanese army. Recently, the Lebanese army has greatly strengthened its relations with Hezbollah. Thus, as far as Israel is concerned, the Lebanese army and Hezbollah are one and the same.

In the last year, numerous incidents have taken place on the northern border, and some on the border between Israel and Syria. Still, IDF intelligence finds Hezbollah to be the sole sponsor of this activity, which included the burying of a large number of powerful explosive charges that blew up next to IDF patrols. Only the alertness of the soldiers and a large dose of luck have prevented Israeli casualties. One such large roadside bomb going off and killing several IDF soldiers could drag Israel and Hezbollah into a war, which in the space of a few minutes would most certainly pull Syria in as well, and possibly Iran, too. A giant barrel of gunpowder loiters there, at the three-way border between Israel, Syria and Lebanon. Everyone is pulling in a tug-of-war, yet they cross their fingers hoping that the rope doesn't break. Israel blows up weapons convoys from Syria to Lebanon and sometimes — according to reports — on Lebanese territory. This activity crosses Hezbollah’s red lines, and Hezbollah responds with terrorism against Israel in the Golan Heights sector to cover its tracks. Everyone deceives everyone else, and everyone winks at the others. This is a very dangerous game, indeed.

Israel is very worried about the experience that Hezbollah has gained in the current warfare. About a third of its soldiers, something like 5,000-6,000 combatants, fight in Syria where they gain combat experience in built-up areas and in comprehensive military confrontations. They are learning how to operate new short-range rockets equipped with huge explosive warheads that can cause heavy losses among civilians. Syrian President Bashar al-Assad uses these rockets to destroy entire neighborhoods in Syria. It is quite conceivable that Hezbollah will launch such rockets at Israeli border towns in the next round of fighting.

Israel, for its part, is not wasting time. The IDF has declared several times that next time, it will lay waste to all of Lebanon. Chief of Staff Lt. Gen. Benny Gantz told me Oct. 3 that if that should happen, “We will knock Lebanon back by 70 or 80 years.” Israel assesses that Hezbollah is still deterred, but also is in over its head in Syria and northern Lebanon. But all this doesn’t mean that something can’t boil over and burn the entire region at any moment.

On Oct. 7, other incidents were reported in the area of Mount Dov. In the first, two soldiers were wounded by an explosive device near the border. Hezbollah took responsibility for the attack.

With regard to the front between Netanyahu and US President Barack Obama, it’s business as usual. Evidently Bibi knows something that we don’t when he stings Obama in the most sensitive places and at a critical time. (Netanyahu’s comment, “against American values,” may allude to rumors spread by Republicans that Obama was not born in the United States.) The two sides hit new lows every week that they never hit in the past. The question is, when will Obama’s patience run out and he will want to settle accounts with Israel, if at all? Netanyahu met with his patron Sheldon Adelson a day before his meeting with Obama in the White House. It is possible that Adelson is the one who instills anti-democratic tendencies in Netanyahu. Two years ago, Adelson invested $100 million in an effort to get Obama out of the White House. Netanyahu gambles on Israel’s future and here, in his country, they applaud him. True enough, it is “odd.”