Drug use spreads among Iraqi youth

Many Iraqi youths are using drugs to escape the hardships of their lives, as some are unemployed or come from fragmented families. 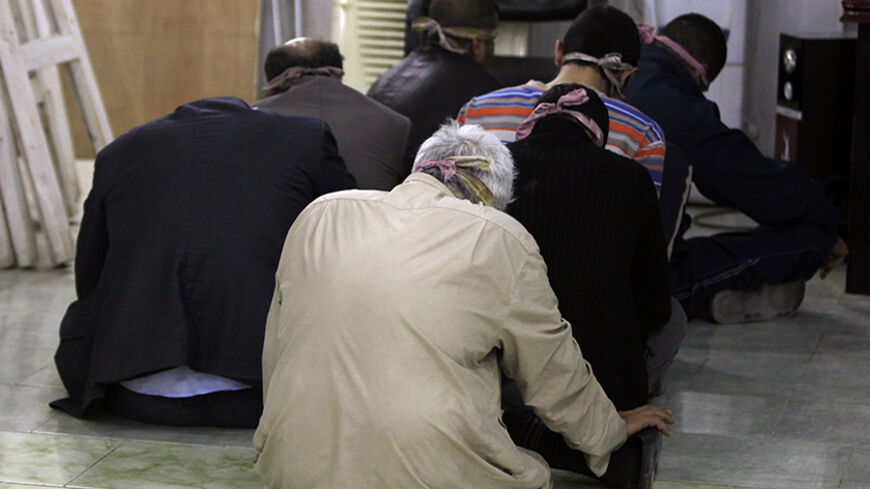 Seven men who had attempted to smuggle over 4 kilograms (8.8 pounds) of hashish into Iraq are arrested in Baghdad, Feb. 11, 2012. - REUTERS/Saad Shalash

BABYLON, Iraq — Iraqi youths refer to a drug addict as a "moukabsel,” a word originating from “capsule.” Visits to cafes and casinos, makes it readily apparent that many youths cannot make it to the end of their day without taking pills, which are available in markets with sellers trading them discreetly.

A young man from Babil province, 100 kilometers (62 miles) south of Baghdad, told Al-Monitor on condition of anonymity that he refuses to called a "moukabsel.” But he said he takes pills whenever he feels down and unable to survive the hardships of his life, being unemployed and not having finished his education.

One of his friends, however, contradicted the young man. He told Al-Monitor privately, “He is a drug addict; he cannot focus and he has wasted a lot of job opportunities that were offered to him.”

Addicts often start with pills, usually as tranquilizers used to treat epilepsy, schizophrenia and other mental disorders. These pills are easily obtained from sellers who make a quick profit from such trade.

Some drug dealers agreed to talk to Al-Monitor as long as the conversation remains limited. Despite this secrecy, some gangs and dealers have acquired a reputation.

Police officer Ahmed Fadel told Al-Monitor, “This is true, but the police cannot rely on rumors or gossip. We need reliable and clear evidence and have to base our action on reports.”

Some drug users were willing to talk about themselves, but without sharing their names. A 20-year-old man told Al-Monitor that his favorite drug is Tramadol and that he gets it from an “official.”

This young man, whose wealthy family provides him with a car and the money he needs, said that he “resents buying these pills from street vendors. A lot of these are fake and dangerous as they are manufactured in houses, or are fake products.”

He said, “Have you tried taking these pills? They make you feel happy.”

Alwan sells cigarettes, CDs and accessories, but says that he is not a drug dealer. He pointed to a number of sellers in one of the market’s corners, where drugs were dealt secretly. He warned Al-Monitor not to mention his name in front of them.

In the place Alwan indicated, there was no clear evidence of drug dealing. One seller denied being a drug dealer. To gain his trust, Al-Monitor convinced him that the drugs were needed for a schizophrenic patient who could not sleep. The seller said he could get his hands on some "blue ghost" tablets, as he called them.

After a long hesitation and with deep concern, the seller admitted that he could secure pills such as Artin, "yellow drugs" and "turrah," all popular narcotics.

The problem of drug addiction has been growing among the children of Iraq. When contacted for comment on available data, a UNICEF representative pointed out that 10% of them are drug addicts. Social scientist Abbas Fadhil told Al-Monitor, “Most young drug users are from ‘fragmented’ poor families or unemployed.”

Pharmacist Samer al-Labban told Al-Monitor, “A lot of pills and medicines are for dual uses, as they are leaked from warehouses and sold on the black market.” Many pills enter Iraq from neighboring countries through smuggling networks that cross the borders.

Social scientist Kareem Hussein has field experience with addicts. He explained to Al-Monitor these are mostly young and unemployed boys who have dropped out of school and that drugs are less common among students.

Already compounded by security, economic and political problems, the prevalence of drugs among Iraqi youth is adding to the country’s woes.

The drug addiction problem is taking on new dimensions in Iraq as the number of drug addicts increases. Meanwhile, there are not enough rehabilitation centers and social and humanitarian associations to help restore addicts to a normal life. The addict is left to himself, not knowing if he can stop using drugs, in the absence of a clear national strategy to fight drug use.