Owners of private museums that housed thousands of antiquities continue to survey the damage and looting committed by Israeli forces in the latest conflict. 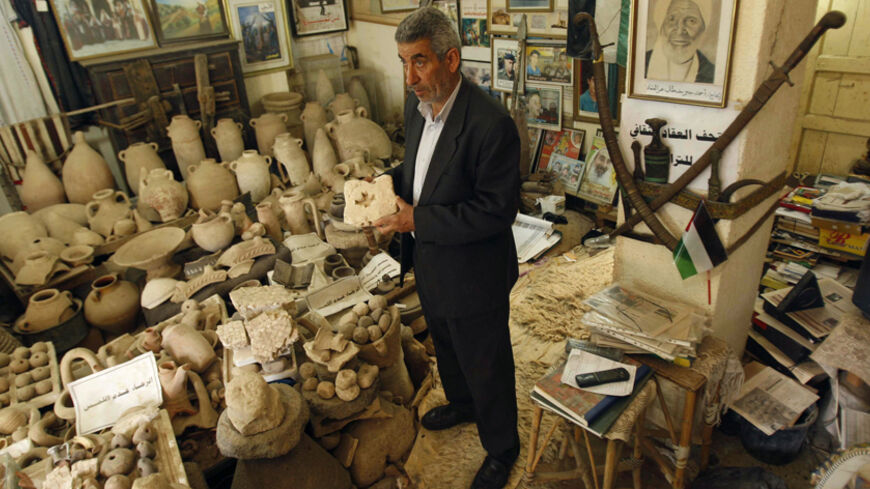 Palestinian amateur archaeologist Waleed al-Aqqad shows his collection of ancient artifacts at his house, which he turned into a museum, in Khan Yunis in the southern Gaza Strip, April 3, 2011. - REUTERS/Ibraheem Abu Mustafa

KHAN YUNIS, Gaza Strip — Gaza resident Jamal Abu Alian, 50, spent most of his life exploring and buying antiquities, filling a large part of his home with precious and rare pieces.

The small museum in al-Zanna village, bordering Khan Yunis, south of the Gaza Strip, represented the fruits of Abu Alian’s antiquity collection for over 32 years. He collected around 5,000 antiquities dating back to the Bronze, Stone, Roman, Byzantine and Modern ages.

Abu Alian told Al-Monitor that after the Israeli occupation declared al-Zanna a closed military region and forced its residents to evacuate the area, Israeli soldiers invaded his home and private museum, destroying and stealing antiquities. “They completely destroyed around 70% of the collection, partially destroyed 20% and stole 10% — the rarest and most valuable pieces in my museum, including three statues,” he said.

With great regret, Abu Alian said that his passion and devotion for collecting antiquities was destroyed by the occupation forces. He asked for help from international and Arab institutions, as well as the Palestinian government, to preserve what he has left and retrieve what was stolen.

Many antiquity lovers in Gaza collect precious pieces and turn parts of their homes into small private museums where they organize and display their collections.

Walid al-Oqad, an antiquities researcher, established a private museum on the ground floor of his home in Khan Yunis. He started exploring and searching for antiquities in the 1970s, and has bought many pieces from other residents. He owns more than 1,200 antiquities.

Oqad said that foreign parties have estimated his antiquities to be potentially worth millions. However, he rejected the offers because he believed the antiquities are priceless.

Although Oqad’s home and museum are far from the borders, several of his antiquities were damaged or destroyed during the series of wars on the Gaza Strip, by repeated shelling nearby.

The Ministry of Tourism and Antiquities in the Gaza Strip is waiting to finish listing the antiquities destroyed by the 51-day war on Gaza, before presenting its complaints to the Arab and international institutions such as UNESCO, the Organization of Arab Culture and other human rights associations.

Mohammad Khalleh, the ministry’s representative in Gaza, told Al-Monitor that 41 historical sites have been registered so far, including a mosque, a church, a house and an ancient bath, damaged or destroyed, in addition to thousands of antiquities owned by residents.

Khalleh said that the Gaza Strip's seven private museums hold around 8,000 antiquities. However, he mentioned the possibility of there being other unknown museums, since some owners do not openly promote their museums.

Khalleh said that a Palestinian antiquities law was passed to remedy the situation of private museums. “The law stipulates that the owners of private museums keep their antiquities, but they cannot be traded, because they are the state’s property. When the owner passes away, the state shall take possession of the antiquities and provide the heirs with financial compensation.”

Khalleh said that the Ministry of Tourism and Antiquities prepared a major project in 2010 — costing in excess of $5 million — to establish a larger museum complete with several wings to display the antiquities of private museums. Each wing would be named after the museum’s private owner. However, due to a lack of funding, the project has yet to begin.

In spite of some Gaza residents' great interest in collecting antiquities, their collections still suffer from a significant lack of government action to protect them from both the Israeli occupation and thieves.