As Qatar expels Egyptian Muslim Brotherhood figures, Turkish President Recep Tayyip Erdogan says there is nothing stopping them from traveling to Turkey "like any foreign guest." 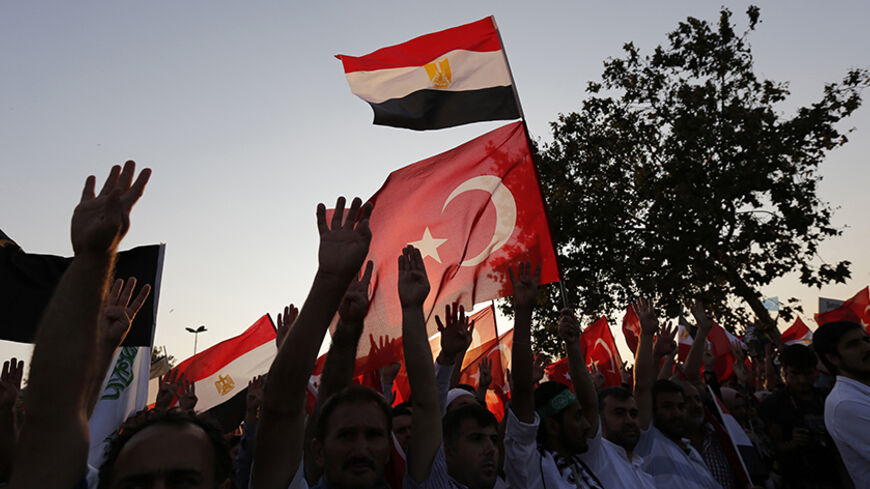 Supporters of Egypt's deposed Islamist President Mohammed Morsi and the Muslim Brotherhood wave Turkish and Egyptian flags during a rally outside of the Eminonu New Mosque in Istanbul, Aug. 17, 2013. - REUTERS/Murad Sezer

With the United States taking the lead in ramping up the fight against radical terrorists in the region, wealthy Gulf countries are exerting pressure on Qatar to expel exiled Egyptian Muslim Brotherhood officials. After the 2013 Egyptian military coup, the group was designated a terrorist organization and a massive wave of arrests forced Muslim Brotherhood officials to flee the country. In June, an Egyptian court upheld the death penalty for a Brotherhood leader and 182 supporters, sending shock waves across the world.

That aside, Hurriyet daily news reported Sept. 17, “Egypt has recently asked Interpol to renew red notices for the Muslim Brotherhood members who are being forced to leave Qatar.” There is no public record, though, showing Interpol issuing any such alert.

Yasar Yakis, Turkey's foreign minister during the first term of Justice and Development Party (AKP) rule, told Al-Monitor that this is a critical piece of information when considering the arrival of Amr Darrag, the Brotherhood’s foreign relations officer, to Istanbul from Doha on Sept. 16. “If Turkey allowed Darrag to enter the country in the absence of an Interpol red notice, the government cannot be accused of violating any international norms,” Yakis said. “But Turkey can be seen as acting against the principles of good faith between friendly countries. This casts a new shadow on Turkey-Egypt relations.”

Upon his Sept. 15 return from a visit to Qatar, Turkish President Recep Tayyip Erdogan was the first to hint that Muslim Brotherhood officials forced to leave Doha could travel to Turkey, saying, “If they request to come to Turkey, we will review these requests case by case. If there are no reasons preventing them from coming to Turkey, we can facilitate their requests. They can come to Turkey like any foreign guest.”

Hurriyet quoted Turkish diplomatic sources as saying, “As there is no visa requirement between Turkey and Egypt, there is no problem for us. But if they apply for a residence permit or want to open an office, that would be an issue for our Interior Ministry to handle.”

On Sept. 17, Erdogan furiously condemned reports in the foreign media accusing Turkey of turning a blind eye to the threat of the Islamic State (IS) — formerly affiliated with al-Qaeda — and claimed that journalism powers are conducting a war of perception against Turkey, portraying it as supporting terrorist organizations. “An international newspaper [The New York Times] yesterday used a picture of the prime minister and me leaving the Haci Bayram mosque [in Ankara], and wrote in the caption that [IS] recruits terrorists in that neighborhood. I am saying very openly that this is at the very least a shameless, despicable and dastardly description,” he said. “It is tactless to portray Turkey as a country supporting or turning a blind eye to terror.”

Erdogan has been a staunch supporter of the Muslim Brotherhood and a strong critic of the 2013 Egyptian military coup, so much so that the two countries have had no ambassadorial representation for nearly a year. Although Muslim Brotherhood supporters held a few meetings in Turkey, they did not assemble here.

In the United Kingdom, which has become one of the Muslim Brotherhood’s key locations, British Prime Minister David Cameron ordered an investigation into Muslim Brotherhood activities in April. The publication of the report has been delayed, however. The investigation was led by Britain’s ambassador to Saudi Arabia, John Jenkins, who said the group should not be classified as a terrorist organization, in stark contrast with the beliefs of top officials in most of the Gulf states.

Nebahat Tanriverdi, an expert on Egypt at the Center for Middle Eastern Strategic Studies, an Ankara-based think tank, also draws attention to the West's not labeling the Muslim Brotherhood as a terror organization. “It is still too early to make a judgment on the arrival of Muslim Brotherhood members to Turkey. They sometimes use Turkey as a transit route and stay here for a while before heading to someplace else in Europe,” she told Al-Monitor. “It would be better to be cautious before giving more meaning to this than it may actually deserve.”

And while all that is true, the Turkish government’s ideological and emotional support for the Muslim Brotherhood and Hamas has created more confusion than clarity, especially with the Turkish government’s quick reaction of accusing all those critical of it of engaging in terror activities. And although there is no doubt that the Erdogan and Davutoglu government has been elected to power, the people do not seem to support the pair's approach toward these Islamist-based groups in the Middle East. For example, the July Pew Global Survey — which had no public opinion polling on the Muslim Brotherhood — shows that only 8% of Turks have favorable views of Hamas, a strong backer of the Muslim Brotherhood, and 85% of Turks have negative views of al-Qaeda. The survey said 50% are concerned about Islamic terror. The larger point is that the Erdogan-Davutoglu team’s foreign policy does not reflect the people’s preferred approach to these groups in the Middle East. The government therefore seems to have taken advantage of Turks' compassion for the never-ending agony in the region.