A lack of border control by Tunisian authorities has resulted in a boom in black market operations along its borders, posing a potential security threat to the country. 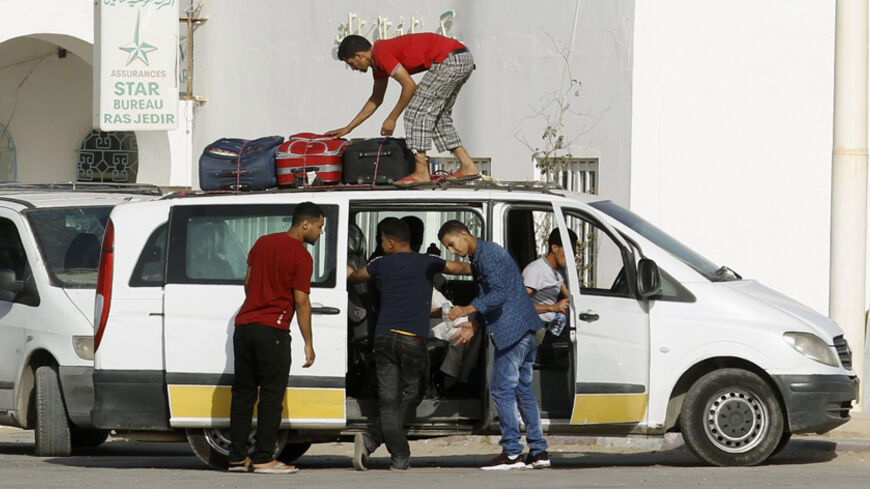 Libyan men load their belongings onto a vehicle at the border crossing at Ras el-Jedir Ben Guerdane, southeast of Tunis, Aug. 2, 2014. - REUTERS/Zoubeir Souissi

KASSERINE, Tunisia — Waiting until sundown, Bazz drove onto an empty desert road just beyond Farianna, a Tunisian village on the Algerian border. While making his way back hours later, he saw an unmarked truck signaling him from the opposite direction.

“These are the roads where we do business,” the 24-year-old smuggler with short black hair, a faint mustache and short beard told Al-Monitor with a smile. “If a truck signals left that means there aren’t any officers ahead. If it signal’s right, then we need to drive off the main road immediately.”

Bazz, who wouldn’t disclose his last name, is one of hundreds of people smuggling goods on the border towns of Tunisia. A graduate of computer engineering, he says that crippling unemployment and high taxes on imported goods have pushed entire communities to work in the contraband market.

Once controlled by select cartels under Zine El Abidine Ben Ali — Tunisia’s former dictator, overthrown by the country’s 2011 revolution — the contraband market has since opened up to residents from all parts of the country.

According to a World Bank report released in December last year, an estimated 25% of Tunisia’s fuel consumption came illicitly from Algeria while smuggled goods made up nearly 50% of all bilateral trade with Libya.

But while border smuggling has helped compensate for the broken economy, it has also facilitated the movement of weapons and militants, country analysts and smugglers have said.

Michael Ayari, Tunisia’s senior political analyst for the International Crisis Group (ICG), says that although border control threatens the primary livelihood of those living nearby, its absence has enabled many Tunisians to cross and return uninspected after fighting in neighboring conflicts.

“Security can’t crack down on us,” said Bazz, while searching for a cigarette in his truck. “Entire communities would riot if they tried.”

Since the assassinations of Chokri Belaid and Mohamed Brahmi — two political candidates who challenged the rise of political Islam in the county — concerns over the state’s inability to secure its borders have soared. But despite the government’s latest efforts to eradicate terrorism in the country, Ayari says that more Tunisians are joining militias to profit from their control of illicit resources.

“Terrorism has an ideological, social and economic dimension,” Ayari told Al-Monitor. “If the government is unable to improve the economy, while positioning their campaign as a fight against terrorism and not organized crime, they’ll polarize the country.”

According to a report released by ICG in November 2013, Tunisia’s Anti-Terrorist Brigade (BAT) had confiscated small bundles of firearms and explosives after searching the houses of alleged terrorists in August 2013. The same report noted that the conflict in Libya has not only pushed cartels to collaborate with jihadists to continue their operations, but it has equally compelled others to equip themselves with hunting rifles and handguns for self-protection. This evolving arms trade has caused many smugglers to confine their shipments to the Algerian border.

“The road from Libya is filled with thieves,” said Bazz. “I now have to pay three times as much to import items from Algeria.”

Bazz supports his entire family by purchasing large stocks of cell phones and flash disks from Dubai and importing shipments into Algeria. From there, he loads cargoes on his truck and transports them to Tunisia before selling each device for 17 dinars ($9.63) to more than 1,800 customers.

Because of fears of antagonizing large mafias and clans, Bazz says that border officers simply collect a small cut before turning a blind eye to his operations. Yet, with over 2,400 Tunisians who have left to fight in Syria, many of whom first departed to Libya, the lack of border controls has reshaped the lives for smugglers and residents alike.

Mosef, a 64-year-old man from El-Kef, a modest town in northwest Tunisia, says that his son ran away from home seven months ago to join the war in Syria. Despite the increasing influence of militant Islam in the country, he blames Tunisia’s border officials for the fate of his son.

“He’s only 16,” said Mosef, wiping tears from his eyes. “Why didn’t anyone stop him at the border?”

The movement of weapons requires the careful selection of multiple networks to ensure shipments are transported uninterrupted. And since Islamist militias have taken control of vital smuggling routes, with historic support from border communities, weak and unpopular security command has left many officers with few choices but to allow militants to move freely while benefiting from their operations to avoid conflict.

“High- and low-level policemen are directly involved in smuggling,” Walid Zarrouk, a former officer who was dismissed in July 2012 for exposing police corruption, told Al-Monitor. “There are many security units collaborating with militias on the border.”

With the economy in free fall and the Libyan conflict escalating, Bazz insisted that the government could secure the borders and stop smugglers if they wanted. By lowering taxes on imports and targeting police corruption, he said that many living within the country’s interior would search for alternatives to illicit trade. And though elections are scheduled to take place on Oct. 26, he has little faith that Tunisia’s security situation will improve.

“The government pushes us to do this work,” Bazz said, as he switched on his left signal to notify the passing truck ahead. “I’m just selling electronics. If I could work legally, I would.”