Will Abbas carry out threats if his peace plan is rejected?

Palestinian President Mahmoud Abbas has repeatedly threatened to go to the International Criminal Court and end security cooperation with Israel if no progress is made on the peace process — but will he follow through? 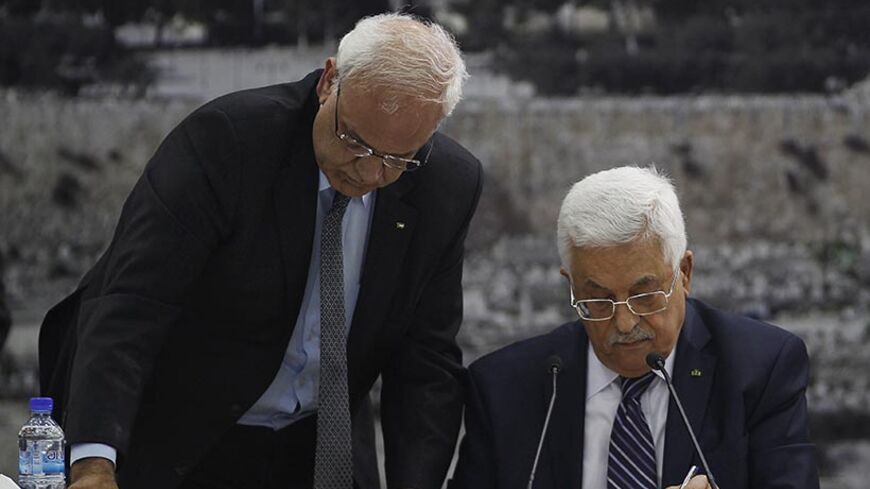 When chief Palestinian negotiator Saeb Erekat and the head of Palestinian intelligence Majed Farraj walked into the offices of US Secretary of State John Kerry on Sept. 4, they were prepared for all eventualities.

For the first time in modern history, the Palestinian leadership had produced a time-based political initiative that was not dependent on the approval of the Americans or the Israelis. The Palestinians are applying the concept that to improve your negotiating position you must have credible alternatives.

President Mahmoud Abbas’ initiative is linked to a series of actions that Palestinians can take if their immediate counterpart says no or attempts to derail the plan. The Abbas plan calls initially for a three-month window to negotiate simply on the borders of the Palestinian state. Israel, in hundreds of negotiating hours, has refused ever to discuss or present a map of what they see as their expected borders with the Palestinian state. If the idea is rejected, the Abbas plan then includes presenting the peace initiative for a binding vote at the UN Security Council.

Palestinians believe that President Barack Obama's administration, which has favored negotiations on borders and security, will have a hard time rejecting a reasonable proposal submitted at the UN. Israeli Finance Minister Yair Lapid has publicly asked Israeli Prime Minister Benjamin Netanyahu to show the Cabinet a map of the future Palestinian borders. The current tensions between Israel and the United States have led Israeli officials to express concern that the United States might not veto a future UN Security Council resolution on the issue.

The rmedia reported the United States had rejected the peace plan, noting that the United States doesn’t support any unilateral action by either party to the conflict. The US response came at the same time that the State of Israel approved two consecutive large land confiscations. The largest land grab in 30 years of 4,000 dunums (1.5 square miles) was announced in an area south of Bethlehem on Aug. 31, only to be followed this week by a further land grab in the Hebron area of 2,000 dunums (0.77 square miles, or about 500 acres).

The Palestinian peace initiative, which has also been submitted to the Arab League, appears to have thrown the Israelis into a frenzy. Senior Israeli columnist Nahum Barnea dedicated his weekly column to the newfound courage of Abbas by saying the Palestinian president was about to turn 80 and was therefore no longer concerned about his political rivals. “Instead of running him down, the advanced age provides him a sense of freedom he has yet to experience.”

The Palestinian initiative is built therefore as a self-perpetuating mechanism in which every negative step triggers a response. Senior Palestinian officials, including Erekat, have been saying in various news interviews that Palestinians have “unprecedented responses” to Israeli policies.

Ultimately, the Palestinians, if rejected by the United States and Israel, will have one clear last resort: the end of Palestinian security as a subcontractor for Israel. If these arrangements are not reciprocated politically, the Abbas plan calls for simply throwing to the Israelis the keys of the West Bank so that the occupying power will bear the true cost of its occupation. Will Abbas follow through on this often repeated threat?