Obama needs peace in Syria to defeat IS 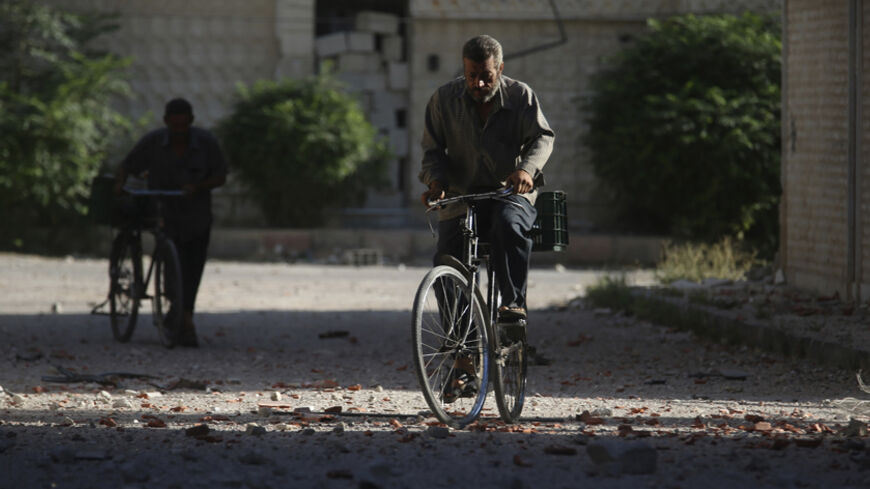 A man rides his bicycle along a street filled with debris in the Duma neighborhood of Damascus, Sept. 10, 2014. - REUTERS/Bassam Khabieh
Khaled Atallah
September 15, 2014

DAMASCUS, Syria — After three and half years of war in Syria, Damascenes have become indifferent to the statements issued by local and international politicians and decision-makers. But this was not the case in regard to US President Barack Obama’s speech last week. Young and old, women and men, all were awaiting Obama’s speech.

Wherever one moved in the streets of the Syrian capital before the broadcast of the speech, you would hear words and conversations about the upcoming speech. “Will the US hit Syria?” “Maybe he is just concerned.” “The US war is different from the war we are living.” These are samples of what could be heard while roaming the streets of Damascus.

In his speech, Obama emphasized that his strategy relies on the leadership of a coalition of regional nations to attack the terrorist Islamic State (IS), weaken it and ultimately eliminate it, pointing out that the United States will hunt down the terrorists who threaten it wherever they are, in Syria and Iraq. Obama's speech was broadcast at 4 a.m. Damascus time, which made it difficult for many Syrians to watch it live, but it was the first item in the morning for most Damascenes.

Mohammad, a university student, was keen to watch the speech live. “The speech did not add anything new. I do not think that this was the expected speech. Obama only made promises. The Islamic State is advancing and taking over more areas and Obama is still issuing media statements similar to those about the countable days of [Bashar] al-Assad. We want this war to end without further bloodshed. America is not the angelic savior. We must all agree to end the slaughter in our country,” he told Al-Monitor.

The National Coordination Committee for Democratic Change in Syria (NCC), an internal opposition coalition, said it rejected foreign intervention even with the Syrian government’s approval. According to a member of the committee, Mouram Daoud, the United States should focus its efforts on a political solution in Syria if it wants to truly address the threat posed by IS.

“Obama should have instead supported the political process; in fact, the terrorism phenomenon in the region will not end with military strikes. There are dictatorships and chaos that are considered the roots behind the emergence of terrorism. Regarding the arming of the opposition, [Obama] is adding fuel to fire. According to a study published by Conflict Armament Research, the IS weapons are mostly US-made, as the organization got them from the Iraqi army and factions fighting in Syria.”

Daoud said there is no military solution to IS in the region, “The US administration should first pressure the Turkish partner to stop the flow of jihadists through its airports and stop buying oil from IS. According to [UN] Resolution 2170, the US will not be able to strike IS sites in Syria without the approval of the Syrian government, which is eagerly awaiting this type of cooperation to restore its international legitimacy. But the US will not include the Syrian government in this war, and will not recognize the government either. This means that the US will stick to its decision to only provide weapons to the Syrian [rebel] factions.”

Bouthaina Shaaban, the Syrian president’s political and media adviser, said in an interview with Syrian state TV that Obama's speech contained many loopholes. “UN Resolution 2170 was unanimously taken in the Security Council, therefore all the parties that approved it are supposed to be part of the counterterrorism action, while the US excluded Russia and China from the call to fight against terrorism,” Shaaban said.

She indicated that the United States cannot be fighting IS from overseas, saying, “UN Resolution 2170 talked about Jabhat al-Nusra and IS, while the US only talked about IS, disregarding Jabhat al-Nusra. Any power, regardless how great it is, cannot fight terrorism from overseas or by aircraft; it must consult and communicate with the victims of terrorism and those who suffer from it.”

Syrian authorities had expressed through Syrian Foreign Minister Walid Moallem on Aug. 26 their willingness to cooperate with the United States in the fight against terrorism, in accordance with Resolution 2170.

According to Rim Turkmani, Syrian researcher and head of the Syrian Civil Coalition (TAMAS), the Syrian divisions, the collapse of state institutions, the spread of violence and the deteriorating economic situation enabled the spread of al-Qaeda groups in Syria. She told Al-Monitor by phone from London, “Facing these groups should begin by pushing for a political solution that enjoys international consensus and allows coordination between the conflicting Syrian armed parties. None of these parties can eliminate IS alone and therefore, the comprehensive strategy that Obama talked about is not comprehensive at all since Syrians have no role in it other than fighting on the ground [to protect] the US’ own interest.”

Kamel Sakr, a pro-regime journalist and political analyst, believed the only positive aspect in Obama's speech, in relation to the Syrian government, is the pledge to eliminate IS, which is the most dangerous and powerful enemy of the Syrian government. According to Sakr, the Syrian authorities are concerned about the possible evolution of US operations from fighting IS to fighting Syria, not to mention the US commitment to supporting the armed opposition and strengthening it against the Syrian army.

“Everyone, without exception, is walking through a minefield full of political, security and military explosives. The regime is used to this, but it must intensify its coordination with its Russian and Iranian allies and increase its operations against IS, Washington’s enemy, and against the armed opposition, Washington’s ally. This is an extremely heavy burden,” Sakr added.

After mobilizing its allies from around the world, the White House hopes that by using force and launching airstrikes, the IS threat will disappear. However, the Syrian people are not only hoping to be rid of this terrorist group, but also the bloody bottleneck they have been living through for more than three years.