Fears in Lebanon rise over Western plans to defeat IS

Lebanese officials are concerned that a Western-led offensive against the Islamic State will not succeed in destroying the organization but simply move it closer to Lebanon’s border, and ultimately into the country itself. 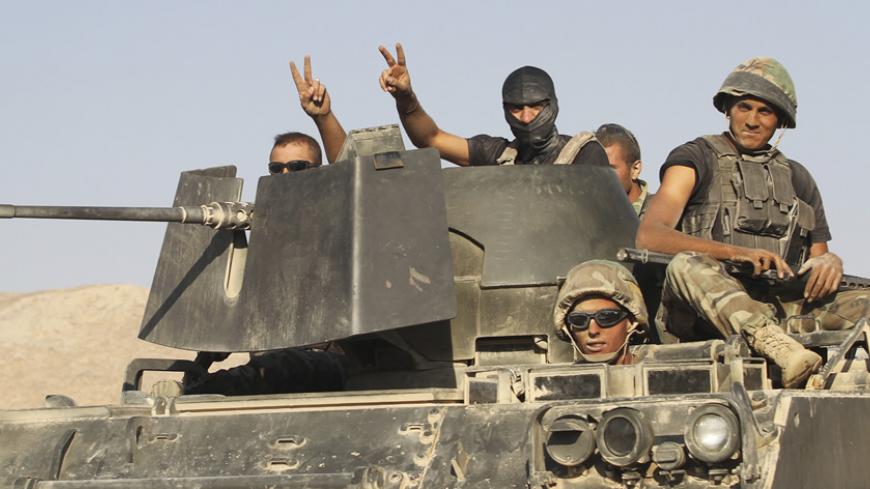 Lebanese army soldiers gesture while riding on an armored vehicle as they exit the Sunni Muslim border town of Arsal, in the eastern Bekaa Valley, Aug. 28, 2014. - REUTERS/Ahmad Shalha

Lebanon’s government and political circles are experiencing constant arguing and hesitation over the planned US and Western war against the Islamic State (IS). This has led parties in the government to take many different positions on the issue, which seemed clear in the behavior of the Lebanese authorities during the conferences held to discuss the war on IS in Jeddah on Sept. 11 and in Paris Sept. 15.

The Lebanese concerns are understandable. A large section of the Lebanese public, from different political and sectarian forces, fear the way in which the Western war will be fought against IS, especially if that war is actually confined to expelling militants from northwest Iraq without being able to entirely eliminate them or drastically reduce their ability to move to other areas. This would lead large numbers of armed extremist and terrorist groups to go from Iraq to Syria, and then into Lebanon.

Despite all the measures in the field taken by the Syrian army, by Hezbollah guerrillas on the Lebanese-Syrian border and even by the Lebanese army at the border, military sources told Al-Monitor that IS terrorists still have infiltration and communication lines between the Syrian-Iraqi borders and Lebanon. They still have the ability to secure the movement of people, weapons and ammunition, specifically from the Islamic State capital in the Syrian city of Raqqa to "its Lebanese capital" in Arsal, northeastern Lebanon.

This was evident in the battles that erupted on Aug. 2 between IS militants and Jabhat al-Nusra on the one hand, and units of the Lebanese army in the northeastern region on the other.

It should be noted that the repercussions of these clashes are still continuing, with Sunni Islamist terrorists still holding Lebanese soldiers captive and threatening to kill them. Terrorists have already brutally killed two Lebanese soldiers, videotaping their slaughter.

Most Lebanese voice concerns that a partial US-Western airstrike against IS would further exacerbate the crisis in Lebanon, increase the number of terrorists and subsequently explode the Lebanese situation as a whole.

However, the Lebanese also fear that the Western plan would change from targeting IS and other terrorists to targeting the Syrian army and trying to overthrow the Syrian authorities with foreign military forces, with the idea of handing over Syria to "the moderate Syrian opposition" in the west, similar to the Libyan scenario three years ago. On March 19, 2011, the UN Security Council adopted Resolution 1973 imposing a "no-fly" zone over Libya. Afterward, NATO launched airstrikes on Moammar Gadhafi’s forces under the cover of this UN Security Council resolution, which led to his overthrow on Aug. 23, 2011. Libya was then dragged into a state of chaos that is still continuing.

The majority of Lebanese are aware of the lack of moderates on the ground. The evidence is that in the last three years, Lebanon has been open to all forms of the Syrian opposition, including the public appearance of extremist opposition fighters in different regions of the country, which shows the freedom of movement they have against the will of the Lebanese authorities.

On the other hand, no gunman has shown up in any Lebanese area or among displaced Syrians (who now amount to over 1 million) and no Syrian politician has arrived in Lebanon claiming to represent “the moderate Syrian opposition.” Lebanon is an open territory for any movement of all Syrian opposition factions, for two reasons. First, the political situation in Lebanon is unstable and the Lebanese-Syrian border is open. Second, more than 1 million Syrian refugees are present on its territory, and they are supposed to represent all Syrian orientations. Despite this, all violent opposition movements have been found in Lebanon, even the Syrian IS, but no Syrian said that he represents "a moderate Syrian opposition." If Beirut, which is open to all political, media and even military movements, is devoid of any — even a symbolic — presence of "the moderate Syrian opposition,” then how could such forces exist in Syria itself?

One of the heads of the Eastern Christian churches told Al-Monitor that during the meeting — held at the White House on Sept. 11 between those church leaders and US President Barack Obama — one of the church representatives insistently and loudly told Obama, “Please stop using the term ‘moderate Syrian opposition.’ The developments have proved that this is an illusion. There are only two parties in Syria: the Syrian authorities and IS. Let's not pay the price once again.”

The second Lebanese concern of having the US-Western war against IS deteriorate into a war against the government in Syria is understandable as such a scenario will automatically result in complete — albeit temporary — Syrian chaos. This chaos will only be of benefit to terrorist and extremist movements, compared with which IS would seem moderate or less insane and brutal.

The Libyan scene is still fresh in our minds, just like the Sept. 11, 2012, attack on the US Consulate in Benghazi and the brutality against US diplomats. As a result of the chaos that spread following Gadhafi's fall, the Islamic militants, who took advantage of the Western military intervention, entered the US Consulate in Benghazi and killed US Ambassador Christopher Stevens.

It should be noted that the situation in Syria is more challenging than that in Libya at the time in terms of demography, the number of terrorist and extremist groups, arms and ammunition, terrorist hatred and madness and so on. Thus, the question arises as to the kind of disaster that could take place in such a scenario.

All of these concerns are haunting the minds of the Lebanese people, government officials and politicians. This is what led the Lebanese government delegation in Jeddah and Paris to make a remarkable move and establish unprecedented contacts. What could have happened there?