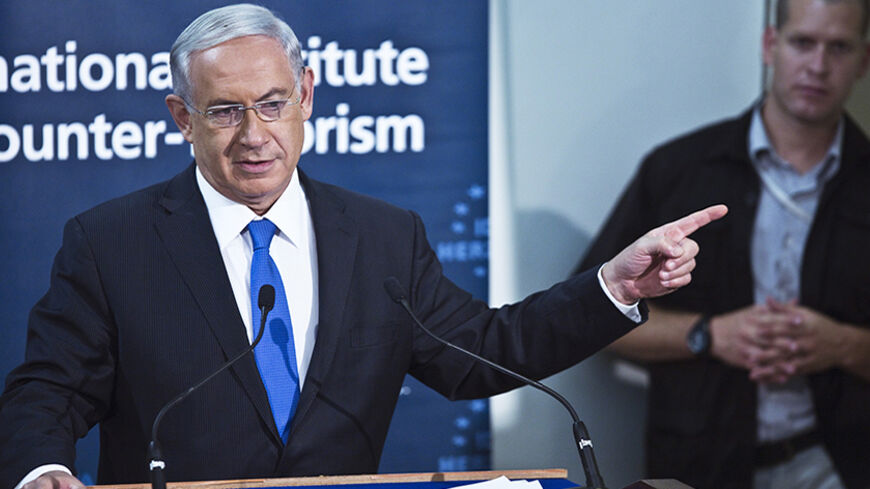 Israel's Prime Minister Benjamin Netanyahu speaks during a conference on counterterrorism at the Interdisciplinary Center in Herzliya, near Tel Aviv, Sept. 11, 2014. - REUTERS/Nir Elias

The eyes of the entire world are fixed on the beheading parade of the Islamic State that breaks its own records almost every week. The incomprehensible brutality, the uncompromising fanaticism, the wanton, flaming hatred and the appalling barbarity of the struggle — all these have attracted most of the global attention in recent months ever since the Islamic State in Iraq and al-Sham (ISIS), now simply the Islamic State (IS), burst into world consciousness.

This is the old war. It will take time until we rid ourselves of the outcomes of this territorial and physical terrorism, in favor of the next kind of warfare, but it behooves us not to ignore the future. It is already here. In future world wars and the great struggles yet to come, cyberspace will occupy a growing domain in the arenas of war. Resources will be redirected from the effort to kill as many human beings as possible with the least effort in the shortest time, or to behead as many victims as possible to horrify as many civilized Westerners as possible, to something completely different. Instead, the goal will be to sabotage the automated Internet infrastructure of as many systems as possible in enemy countries and spaces. The goal: to disrupt civilian life, to neutralize or destroy security systems and even inflict serious damage on assets and economies and kill as many people as possible, too.

“The capabilities are already here,” I was told last week (mid-September) by a high-echelon Israeli who has been dealing with this issue for many years. “Already now there are organizations and countries that can physically harm targets and people through the Internet.” I asked for examples. “There are many things that we still can’t talk about,” he said, “but I’ll give you an obvious example. Let’s assume that an espionage organization wants to eliminate someone in a foreign country. Let’s assume that this ‘someone’ is now driving a contemporary car, a brand created in recent years. Or, in other words, a car whose systems are operated by a computer. All you need is to know how to make a long-distance connection to the car’s computer systems and to know how to track any kind of cellular gadget the person has in the car. Even if the gadget doesn’t work or doesn’t even have a battery. With this kind of long-distance tracking, you can know exactly when the car is driving down a steep slope, then disable its braking system all at once. At that moment, you have determined the fate of everyone in the car.”

I asked the official if Israel has already used this method to neutralize foreign terrorist agents. “No,” he said, “we’re not there yet. But theoretically this possibility exists out there. Soon there will be countries or espionage organizations that will be capable of carrying out such moves. And that is only the beginning.”

On Sept. 21, Prime Minister Benjamin Netanyahu made an important strategic decision and ended a behind-the-scenes struggle that had been waged for more than a year: He decided to establish a “National Operative Cyber Defense Authority” to protect the civilian sphere from cyberthreats. In doing so, Netanyahu rejected the demand of Israel’s Shin Bet, one of the country’s most awe-inspiring security institutions, to leave the cyberfield under its responsibility and jurisdiction. This means that Israel will establish a new espionage organization devoted entirely to cyberdefense and attack. Thus, Netanyahu accepted the recommendations of the Israel National Cyber Bureau (INCB) in the prime minister’s office. The INCB is headed by one of the most intriguing individuals in Israel’s digital defense system, Eviatar Matania, who is more of a scientist than a security person. Matania is a graduate of the Israel Defense Force's (IDF) elite Talpiot academy program. He holds a bachelor's degree in physics and mathematics (Hebrew University), a master's degree in mathematics (Tel Aviv University) and a doctorate (Hebrew University) in judgment and decision-making. Matania appears to be the ideal candidate for the task of advancing Israel’s well-known capabilities from the 20th to the 22nd century, in one giant leap.

The INCB began operating in January 2012. Israel is a world leader in the cybersphere and governmental mobilization. Despite this, Israel faced an unprecedented cyberattack during the Protective Edge campaign last month. One of Israel’s high-level security heads said that in the course of the Protective Edge campaign, the cybernetic attacks on “Israel’s Internet space” increased by a factor of nine. According to Israel, Iran was behind a large percentage of these attacks. We are talking about 900,000 attacks a day, compared with about 100,000 cyberattacks on Israeli targets under normal circumstances.

“Iran entered a new phase in the last year,” said a high-ranking Israeli security figure. “It significantly upgraded its cybercapabilities in the defensive as well as offensive realms. Until about two years ago, Iran was not a real player in the field, but today it is capable of launching serious attacks and challenging our efficient defense systems.”

Most of the cyberattacks in the course of the Protective Edge campaign were, as aforementioned, against civilian targets. However, there were also attempts to damage military targets, for example the Twitter account of the IDF spokesman. During the operation, hackers managed to plant a Twitter message in the IDF spokesman’s account. The message said that two rockets had hit the Israeli nuclear reactor in Dimona, causing a radioactive leak endangering the nearby city of Dimona. This was one of the isolated successes of that cyberattack. The vast majority of the attacks were repulsed, but the message was clear: The future is already here, and it is dangerous.

Last week, I spoke to a high-ranking Israeli who is a cyberconsultant to some of the country’s national institutions. “To retain relative security in this field,” he said, “you have to constantly maintain a considerable distance from terror agents who try to penetrate and sabotage digital infrastructure. It is exactly like an armament race. As of today, Iran is in the place that Israel was two or three years ago. Hamas’ cybernetic capabilities are, for example, quite inferior and currently do not represent a significant threat. But we must remember that Hamas’ first Qassam rockets were launched against itself; in the first year, they were not viewed as a serious threat. Yet today, Hamas can produce enough rockets to send half of the Israelis to shelters for a full month. We must hope that we won’t face such a situation regarding the cyberthreat too.”

Israel is determined to retain its qualitative edge over its adversaries in this field at any price. Israel leads the world in digital intelligence. Israeli intelligence systems were created to update the combat forces in the field almost in real time, via sophisticated computer systems that reach their end-user (such as the tank or ship commander or pilot), accurately, precisely and without delay. In the course of the Protective Edge campaign there was an incident in which prisoner interrogators from the IDF Intelligence Branch (Unit 504) succeeded in extracting critical information about a certain tunnel from Hamas’ tunnel diggers who were captured and interrogated on the ground. A year ago, this information would have been transferred to the Intelligence Branch command where it would have been filtered, formulated, checked and then listed in the intelligence gleanings after a few days. It would have taken, at best, two or three weeks until it arrived to the ground units, assuming nothing happened along the way. Today, the whole process takes only a minute or two, allowing the field soldiers to receive new, exact and fresh targets in real time, and eliminate them. By the way, all those computerized information systems and sophisticated digital intelligence that Israel established may be targets for cyberattacks in the distant future when Israel’s antagonists achieve similar capabilities.

With everything connected to physical warfare, IS sent us back to the Middle Ages. Cyberwarfare will take us to the 22nd century. At the moment, we have no way of knowing which option is better.