Star Mohsen Ali is unique in his travels across Iraq's provinces to sell and promote books to a generation increasingly thirsty for literature. 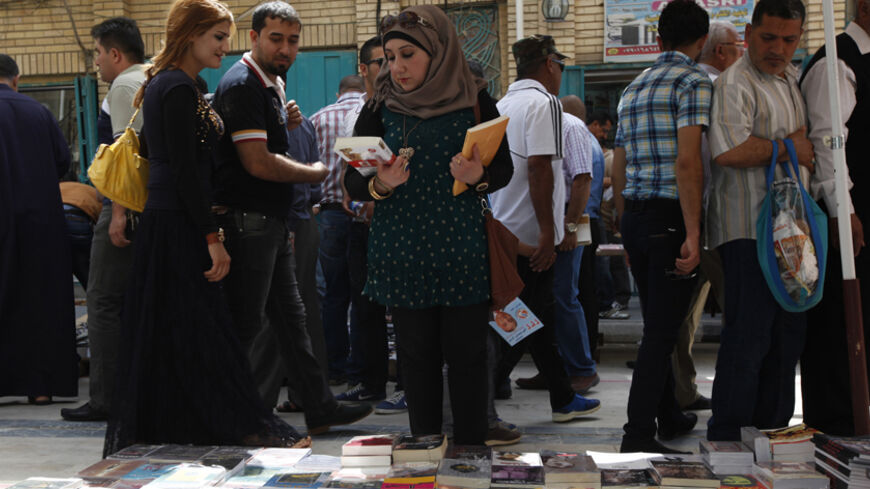 The worsening violence plaguing Iraq has not prevented the bookseller Star Mohsen Ali from organizing book fairs in cities and provinces across the country. Since his first exhibition in the southern town of Shatra four years ago, Ali has held 53 book fairs, including in the roiling cities of Mosul and Tikrit.

The owner of a bookshop on well-known Mutanabi Street in Baghdad, Ali believes that reading is a must. Books, he thinks, are not meant to adorn bookshelves. Iraq's provinces are suffering from a weak provisioning of books, leading to a shortage in the supply of new and rare publications, so Ali delivers the publications he manages to obtain to those in need.

He has met with fame in the cities he has visited. He is always surrounded by readers, lending the impression that Iraqis are eagerly returning to literature. Could this trend be a solution to some of what ails Iraq? Ali told Al-Monitor in a telephone interview from Baghdad that his work makes ​​him feel optimistic because of the overwhelmingly positive response to reading he encounters in the nation's cities.

Ali has visited Iraqi cities so much that large numbers of people know him. They have given him such nicknames as the "cultural Sinbad" — after the fictional sailor in Arab mythology known for his travels — and the "ambassador of the book," among others. Commenting on this, Ali said, “My friends multiply day by day. They ask me to come back to them with more books. Some students and professors call me and ask for a rare, missing or forbidden book. Delivering a book or a thesis to students who need it makes me feel very happy.”

Although selling books is his livelihood, Ali does not do his job just for the money. Sometimes he distributes books to people who need them and to girls and boys who enjoy his exhibitions and refuses to accept payment.

As he does not have his own means of transportation, Ali relies on a traditional, somewhat complicated and costly method to move items. He ships books in boxes and has them transferred to a carrier to be taken by bus to their destination. He then picks up the books there and carries them to the exhibition location. Ali does everything alone, although it entails a great deal of effort, money and risk. He takes great pride in his work.

Ali's promotion of literature reveals that some Iraqi cities have a thirst for reading and exploring new books. This has encouraged some personalities and civil society organizationsn to work with and support him, such as by providing halls for his exhibitions.

In contrast with such cooperation are the threats that Ali receives. In addition to becoming a victim of indiscriminate violence in Iraq, Ali is also vulnerable to the individuals and political and religious authorities who want to ban or prohibit certain books. He has been prevented from holding exhibitions in some intensely religious cities. Ali said he had received several death threats because he had exhibited books that went against religious and social trends. “Some cities have banned publications by the poet Nizar Qabbani. Other cities prohibit the novels of Ahlam Moustaghanemi, and the list goes on,” he said.

Threats, however, do not deter Ali from continuing to promote books. When asked why he makes the effort and endures the risks, he said, “The joy in some people's access to certain books makes me forget the threats and risks.” He expressed his discontent at these efforts at prohibition, stating, “Banning and outlawing books are two of the most important reasons for the collapse suffered by the country.”

It seems that a new generation of youths is emerging in Iraq, one that enjoys reading. Ali told Al-Monitor that he has had experiences with this generation, whose members he said, are trying to find answers to questions that others never dared ask before. Previously, they might have been deemed political or religious crimes. This is cause for optimism in future Iraqi generations.