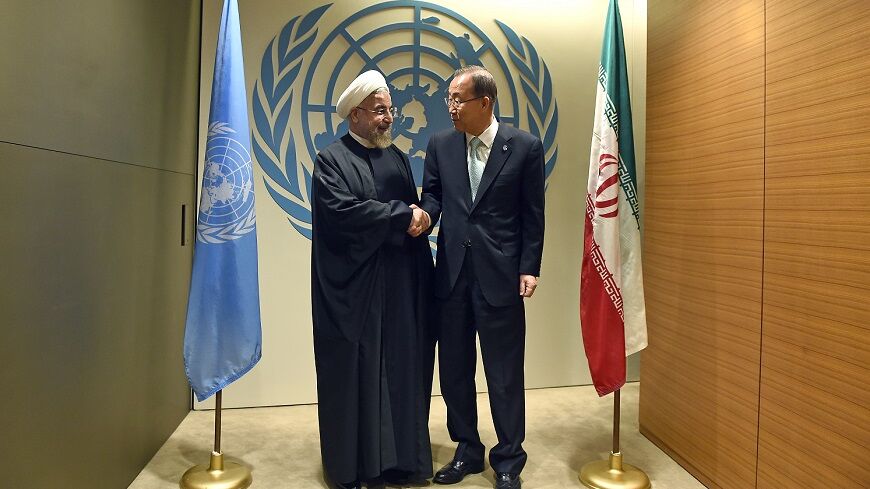 WASHINGTON — Iran's insistence that UN Security Council resolutions on its nuclear program be lifted at the front end of a final nuclear deal has emerged as an unexpected sticking point in the negotiations, diplomats say.

Western diplomats said if a final nuclear deal is reached, the United States and European Union would quickly waive and then lift unilateral, proliferation-related economic sanctions on Iran that would provide a rapid windfall to Iran's economy. (However, the US trade embargo on Iran, enacted after Iran's 1979 seizure of the US Embassy and hostage crisis, would remain in place, a senior US official said.) A new UN Security Council resolution outlining the deal and what steps all sides had agreed on would also be passed, Western diplomats said.

But the lifting of UN Security Council sanctions on Iran's nuclear program would be step by step and tied to Iran's compliance with the terms of the deal, as well as cooperation with the International Atomic Energy Agency (IAEA) probe into past possible military dimensions of Iran's nuclear program, the Western diplomats said.

Iran insists on the lifting early on of UN Security Council resolutions, which Iran sees as legitimating the international sanctions regime imposed on it for its nuclear program.

The lifting of UN Security Council resolutions “within an acceptable time” is a requirement for a nuclear deal, Iranian President Hassan Rouhani said at a news breakfast in New York Sept. 23., Al-Monitor's Barbara Slavin reported.

But lifting UN sanctions “takes a little while,” a Western diplomat involved in the nuclear negotiations, speaking not for attribution, told a small group of journalists in New York on Sept. 26. “It depends largely on Iran, on its level of cooperation. If it cooperates a lot, it can go quickly,” the diplomat said.

“What Iran would like to see is to get rid of the UN Security Council sanctions immediately,” the diplomat said. But "we need to make sure even within the framework of a comprehensive deal [that] they would abide by their commitments."

After a final deal, a UN Security Council resolution “would endorse the [comprehensive] agreement, and would explain step by step, this has been done, ... and eliminate sanctions step by step,” the western diplomat said.

“We are not asking for something very different” from how the IAEA verified Iran’s compliance with the JPOA, the diplomat said. “We need the IAEA there to make sure everything is done in the proper way.”

“We know they [Iran] have a different view,” the diplomat said. But “they should not underestimate the huge economic relief for their people” a nuclear deal would bring. Iran could get “quick … relief of a huge portion of [European and US unilateral] trade and economic and oil sanctions. … This is a lot for a country under embargo.”

The UN issue is not the only remaining stumbling block toward a deal. US, European and Iranian officials said significant gaps on core issues remain after some 10 days of meetings in New York this month.

“Comprehensive negotiations are much more complex and much more difficult,” than those that led to reaching the interim Iran nuclear deal last fall, US Deputy Secretary of State Bill Burns said at the Washington Institute for Near East Policy on Sept. 29. “There are quite significant gaps right now on issues critical” to a resolution.

“It should not be impossible to reach a comprehensive agreement,” Burns said. “What is at issue is reaching an agreement with mutually agreed limitations” on Iran’s program.

Daryl Kimball, executive director of the Arms Control Association, said Iran’s negotiators may be pressing the demand for quick lifting of the UN resolutions as part of a negotiating tactic to get more and faster sanctions relief in the deal.

“Given that the Iran negotiating team is very familiar with the UN system and Security Council resolutions, they have to understand that the ability to modify Security Council sanctions that depend on resolution of an IAEA investigation are limited,” Kimball said.

“Some sanctions mandated by the Security Council may be modified or adjusted, but not necessarily all,” by the new UN Security Council resolution that would be passed in the event a final Iran nuclear deal was reached, Kimball said. “That is likely one of the several issues that the two sides have to settle.”

(Barbara Slavin contributed to this report.)