Iran cleric: They used to say loudspeakers were forbidden

Two prominent clerics have taken opposing views on the issue of high-speed Internet, which is currently being debated in the Iranian media. 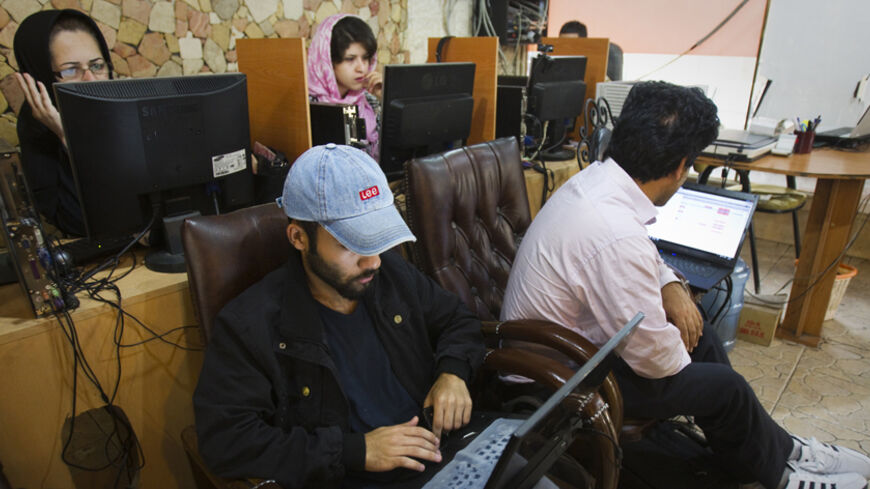 Customers use computers at an Internet cafe in Tehran, May 9, 2011. - REUTERS/Caren Firouz

The issue of high-speed Internet has once again become a hot topic in the Iranian media with two prominent clerics addressing the issue and taking opposing sides. According to Ensaf News, Ayatollah Mohammad Reza Nekoonam, a prominent cleric in Qom, defended high-speed Internet during a question-and-answer session with university students in Tehran.

“We have put so much pressure on the Internet that our Internet is at the [speed] of a wagon,” Nekoonam said. “I say that instead of becoming like snails, let’s get on this world train. I have told my seminary students that it is necessary for you to sell the carpets underneath your feet and go buy a laptop or tablet. I said if you are not able to speak to a billion people, you are not worth anything. A Muslim is someone who is civilized, not someone who is an idiot.”

Nekoonam said that the debate over high-speed Internet is no different from those over the introduction of other technologies. He said it was the same when loudspeakers arrived, and some clerics initially called them haram. Then they said the same thing about the radio, then television, then video, and now there are satellites everywhere.

Ayatollah Ahmad Alamulhudda, a member of the Assembly of Experts and Mashhad Friday Prayer leader, a position to which he was appointed by an institution that operates under the purview of the supreme leader’s office, said that Supreme Leader Ayatollah Ali Khamenei was opposed to high-speed Internet.

“Today the biggest calamity is at the Ministry of Communications,” said Alamulhudda Sept. 16. “While the supreme leader has given orders not to increase the speed of the Internet, we are witnessing the trampling of his orders. And the Internet is in the pockets of all the youth, and this issue alone is resulting in the spread of cursing in society.”

This “calamity” is the promise of Iran’s Communications Minsiter Mahmoud Vaezi, who said that the ministry planned to increase Internet speed in the country. He has been summoned to testify in parliament on the issue.

In discussing access to social media and videos posted online, Iranian Foreign Minister Mohammad Javad Zarif, in an interview with The National Interest, said, “There is a debate in our societies over how far the government should go to protect the population — particularly the youth — from what people in traditional societies consider obscene: profanity, pornography.” He called it a “debate that is ongoing inside Iran, and it’s a debate that will be settled by various people participating.”

Zarif's “various people” will certainly be both elected and unelected government officials, clerics and to a limited extent the media outlets that will choose based on their editorial inclinations which commentary to highlight and which to diminish.