Hamas officials have expressed a desire to shift the armed confrontation with Israel to the West Bank, prompting a Palestinian Authority crackdown on Hamas. 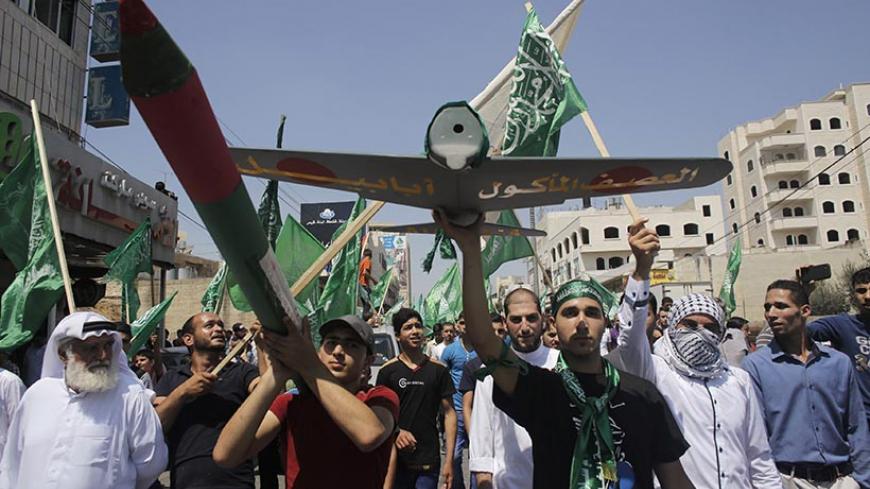 Palestinians hold a mock rocket and a model of a Hamas-made drone during a rally in Hebron celebrating what they said was a victory by Palestinians in Gaza over Israel, Aug. 29, 2014. - REUTERS/Ammar Awad

As soon as the war on Gaza came to a halt at the end of August, Hamas organized celebratory events in the West Bank for the “victory” it achieved over Israel.

Mahmoud al-Zahar, a member of Hamas’ political leadership, made a speech by phone during a celebratory event in Hebron conveying to the people of the West Bank the need for an armed resistance to cut short the life of Israel's occupation and fend off its aggression against the Palestinians.

Ramadan Shalah, leader of Islamic Jihad, said during a speech delivered after the end of the Gaza war that what the resistance did in Gaza should soon be done in the West Bank to liberate Palestine.

Al-Monitor spoke to a Hamas official in Gaza and asked about shifting armed resistance to the West Bank. “It is not a secret that the real arena of resistance is in the still occupied West Bank,” he replied. “Talks are not only limited to Palestinian political groups, but extend to reach resistance powers that are looking into proposed mechanisms and tools, despite the political and security obstacles that can impede the process. This means that the question Hamas has prompted is not related to whether or not resistance will move to the West Bank but to the mechanisms, timing and tools of resistance as well as the field and operational details.”

The official said, “The security and field situation in the West Bank is clear, occupation remains in place and is further reinforced. Settlements are witnessing intensified expansion. These facts will definitely impose a state of armed resistance, in addition to peaceful and popular demonstrations and protests.”

In a phone interview with Al-Monitor, a high-ranking Palestinian security official ruled out “the possibility of realizing the Hamas scenario of moving armed resistance against Israel to the West Bank, because it will harm the whole national project and oust the Palestinian Authority [PA]. Palestinians do not need this naivety that makes them suicide bombers in a useless way.”

“The PA in the West Bank allows peaceful and popular resistance against the occupation, which pays off a lot more than armed acts do. [The latter] cause harm more than anything and benefit the Israeli right wing only,” he added.

This statement is in line with the doubts Palestinian security circles have about the ability of Palestinian factions to move their operations from Gaza to the West Bank, because this seems difficult at the moment and the Israeli response will be dire. Initiating military operations from the West Bank is highly complicated. Armed cells are monitored by both Israel, which considers them a target, and the PA, which refuses to let other parties take up arms in the West Bank. This will impede Hamas from dragging the West Bank into an armed confrontation with Israel.

Al-Monitor spoke with of a number of Hamas officials in the West Bank concerning the possibility of realizing such a scenario. An official who requested anonymity said, “The security situation in the West Bank is really bad, and as soon as the Gaza war ended the PA began a campaign of arrests and summoning Hamas members there. This will impede any new organizational attempts, including [the forming of] any small military group and put an end to any thought or plan about moving armed resistance to the West Bank.” The PA continued its campaign of arrests against Hamas members in the last few days in Hebron, Nablus and Ramallah, including liberated prisoners after organizing celebrations for the occasion of the end of the Gaza war.

Another Hamas source spoke to Al-Monitor about the possibility of rebuilding military apparatuses in the West Bank, noting the advantage of launching armed resistance there. “The West Bank will be a real arena to battle Israel, as it is home to Israeli military facilities and settlements and a severe blow can be delivered to the Israeli presence there. This paves the way for the expected withdrawals, as happened in Gaza, even though there is fear about clashes with the PA. This subject requires a calm dialogue with the PA to reach a consensus political program.”

The Palestine Network for Dialogue, an electronic platform affiliated with Hamas, said the likelihood of armed resistance in the West Bank was growing. The West Bank saw 1,000 confrontations with the Israeli army, or an average of 20 confrontations a day, according to the website. Also, 20 Palestinians died and hundreds were wounded, in addition to 1,050 arrests, including 500 arrests in Jerusalem. Also reported were 176 attacks with Molotov cocktails against Israeli targets, 28 shootings, 16 explosive devices, in addition to stabbings, hit-and-runs and two failed attempts to take car bombs into Israel.

Hamas officials are expressing a desire to move the confrontation with Israel to the West Bank, with one official saying, “Gaza represents 1% of historical Palestine, and has fought three consecutive wars in less than six years. It is time for the warrior’s rest. Gaza has to reconstruct its infrastructure and open the door for other [now] calm battlefronts to erupt against Israel. Palestinians are present in all countries that have borders with Israel and can take the initiative and give Hamas a chance to catch its breath.”