Gazans irritated as Turkey focuses only on Hamas

While some Gazans see Turkey as a true supporter of Gaza, others see it as a supporter of only Hamas and question Turkey’s sincerity. 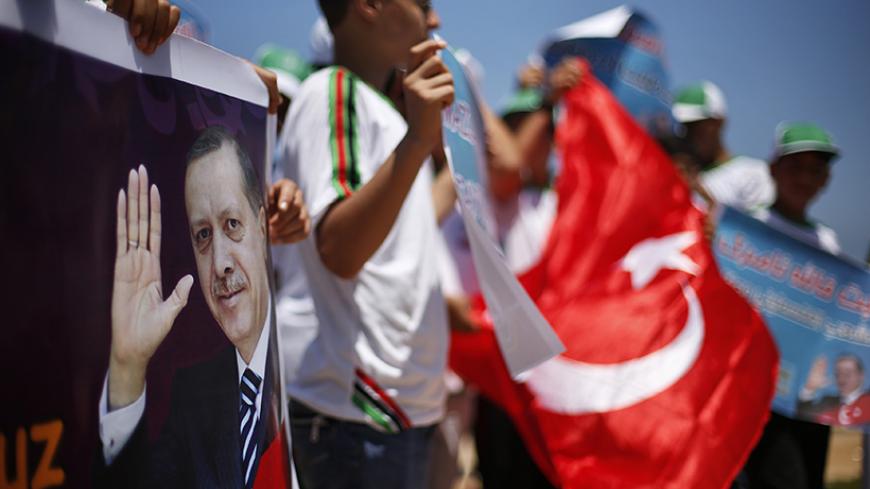 Palestinian youths join a rally in at the seaport of Gaza City, June 18, 2013. - REUTERS/Suhaib Salem

GAZA CITY, Gaza Strip — We were at an iftar dinner under photographs of Hugo Chavez, the late president of Venezuela, and Ahmad Saadet, the secretary-general of the Popular Front for the Liberation of Palestine (PFLP) who has spent his life in Israeli prisons. Not all were fasting, but all were there to share the iftar feast of garlic-flavored hummus, chicken and rice offered by PFLP Radio Ash Shaab. The food was great but the subjects discussed were too heavy.

We are on the 10th floor of a building from which we could see the border with Israel in the east and the Mediterranean in the west. Talking with Zulfikar Shiverjo, the Gaza leader of the PFLP, about the cease-fire initiatives to end the clashes between Israelis and Palestinians, I asked about the role of Turkey. He replied, “Turkey has no other role than to persuade Hamas to accept the American and Israeli demands.” When I reminded him that Prime Minister Recep Tayyip Erdogan was one of the most vocal world leaders about Gaza, he interrupted me, saying, ”He is a liar.” He went on to explain his harsh reasoning:

“Turkey is trying to create a sphere of influence for itself. It is using the Middle East as a card to show the EU that Turkey has an alternative. If Turkey ever becomes a full EU member, it will forget the Palestinian issue. Turkey always had close political, military and economic ties with Israel. Its trade with Israel grew four-fold ever since the Davos episode [when Erdogan denounced then-Israeli President Shimon Peres and walked off the stage]. The Erdogan government is using Gaza for its own interests. The Palestine policies of Iran and Turkey are alike. They are exploiting Hamas to boost their own standing in the region. If Iran solves its nuclear crisis with the West, it will push Palestine to the back burner.”

These stinging remarks might confuse those who look at Turkey from Hamas’ perspective. According Shiverjo, Turkish and Qatari support for Hamas helped perpetuate the political division of Palestine. He said, “That policy has worked for the past seven years. With Hamas in Gaza and Fatah in the West Bank, Palestinian political unity has been split.”

This opinion is not confined to the PFLP and Fatah, but widespread, even among conservatives who don’t identify with Hamas. At a conference in Baghdad in March 2014, Palestine's Former Minister of Justice Ali Khasan accused Turkey's Justice and Development Party (AKP) government of scaling down the Palestine issue to a Hamas issue. It wouldn’t be misguided to say that the Palestine cause that for years has been supported by leftists, rightists, communists, Nasserites, nationalists, conservatives, Muslims and Christians is now undergoing a process of Islamization, while it is not unusual to hear claims that Turkey and Qatar are actually pushing to turn Palestine into a Muslim Brotherhood affair.

This issue was raised in a gathering at the Jabal Zeytuun neighborhood residence in Gaza of Elias el Cilde, a member of the executive board of the General Federation of Palestinian Labor Unions. Cilde was answering my questions under a portrait of George Habash, the eternal leader of PFLP. Cilde was complaining of the changing character of the Palestine resistance. He emphasized the vital role of Christians in the leftist movements, saying, “We are resisting occupation. This is not a religious cause. We are proud of our Palestinian and Arab identities. When it comes to resistance, we support all resistance movements, including Hamas and Islamic Jihad. But because of our social lifestyles, we are part of leftist movements. At the moment, we are very active in social welfare support. Our doctors, relief organizations and youth movements are actively supporting the resistance.”

AKP cadres reject the accusations by recalling their efforts to reconcile Hamas and Fatah. But the AKP’s Hamas-oriented policy meshes with relations it developed with the Muslim Brotherhood in the Middle East and North Africa and its harsh reactions to the treatment of Muslim Brotherhood in Egypt. As the Egyptian government under President Aldel-Fattah al-Sisi, while standing behind Israel, is expanding its struggle with Muslim Brotherhood to cover also Hamas in Gaza, tensions between Ankara and Cairo are public knowledge. It is as if two new axes, with and against Hamas, have emerged in the region.

Many commentators I spoke to in Gaza differentiate between the established interests of the Turkish State and Turkish people around the Palestine issue and the AKP’s policy that has shrunk this interest and channeled it to Hamas. Although not as lively as before, the men in the street in Gaza, especially Hamas supporters, still have some sympathy for Erdogan. Whenever they learn we are Turkish, the first words they say are “Erdogan, Erdogan.” But this radically changes when we speak with political actors and activists who question the sincerity of Turkey’s foreign policy. In the minds of many of them, Turkey is a country that shouts a lot of protests about the suffering of Gaza but doesn’t react like Latin American countries. The contradiction between the Davos episode and the increasing volume of trade between Turkey and Israel ever since is the most cited example of this split. Turkey occupies the seventh place in the list of countries Israel exported to and the 10th among its sources of imports.

To think Gaza is only Hamas

I joined a conversation at Gaza’s Tel al Hawa district in which these contradictions were being discussed. A former resistance fighter from the secular wing said, “After 1950s, in Gaza, first the communists, then Nasserites, PFLP, Fatah and now Hamas were prominent. Yes, the resistance is becoming Islamized. Nevertheless, the resistance has not lost because of Hamas’ religious identity. To the contrary, it became more powerful. But after Sept. 11, 2001, the existence of an organization like Hamas has served Israel’s interests. Turkey is not sincere about Palestine. If it had been sincere, its commercial and military ties with Israel would not have boomed.” Another speaker contributed, "It is as if Erdogan is not supporting Palestine because it is Palestine, but because of the Muslim Brotherhood.” A leftist activist added, "Turkey is treating us as if we are all Hamas. Naturally, for me, despite its past mistakes and its efforts to impose its lifestyle on all of us, Hamas is a resistance organization that is fighting for all of us, for the liberation of Palestine. Turkey has to approach Palestine as a whole."

Role in cease-fire: assistance to Hamas or pressure on it?

There are wildly divergent perceptions about the mediation role Turkey assumed for a cease-fire. Ihab al Gussein, a spokesman for the Hamas government who we frequently met outside the Shifa Hospital, never missed an opportunity to express gratitude for Turkey’s role in a cease-fire and its support of the people of Gaza.

But PFLP spokesman Hani Tsevabda told me, "We are concerned that Turkey and Qatar are exerting pressure on Hamas to dilute its conditions for a cease-fire.”