Why did Turkish expats ignore Erdogan's call to vote?

Even with intense campaigning in Europe, Prime Minister Recep Tayyip Erdogan failed to rally Turkish expats to vote in the presidential elections. 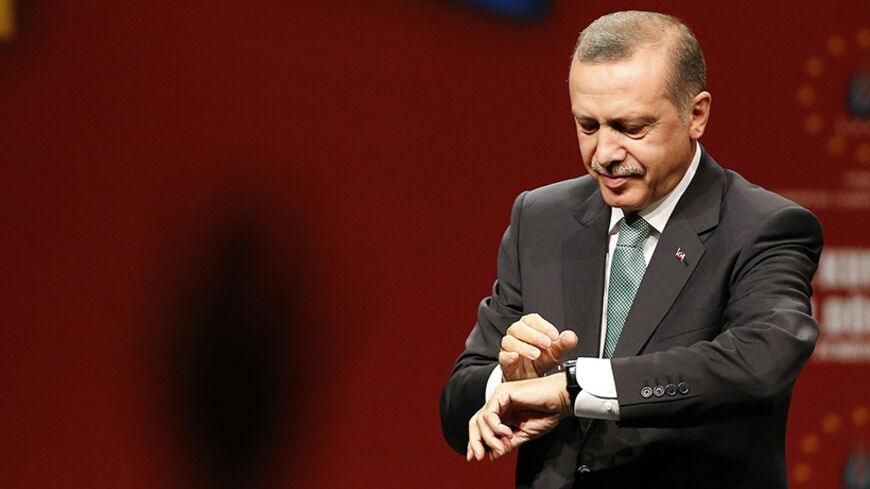 Turkish Prime Minister Recep Tayyip Erdogan looks at his watch at the end of his meeting with supporters during his visit in Cologne, May 24, 2014. - REUTERS/Wolfgang Rattay

The presidential elections in Turkey will make history on Aug. 10 with quite a few “first-time” occurrences. For the first time, Turkish citizens living abroad are allowed to cast their votes in the country where they reside. Previously, they could vote only at the Turkish customs gates when leaving the country. A new regulation, announced on May 18, 2012, allows all Turkish citizens in possession of a Turkish identity card to vote at Turkish embassies or consulates abroad — in 54 countries at 103 locations. Voters would have to register for an appointment or would be assigned an appointment by an automatic system to cast their ballots. The dates for expats for the first voting round began on July 31 and ended on Aug. 3.

According to Turkish law, citizens are automatically registered to vote once they have reached the age of 18. About 53 million Turkish citizens are expected to vote on Aug. 10, while the potential expat votes are about 2.8 million. Considering there are three candidates, and expat voters add up to almost 5% of the total voter base, expat votes could significantly affect the outcome. The ruling Justice and Development Party (AKP) pushed this new voting regulation precisely for this reason.

On Aug. 4, however, Deputy Prime Minister Emrullah Isler announced that from the eligible Turkish voters abroad only about 5%, or 232,000 expats, turned out to vote. This was surprising news to say the least. Votes cast abroad are sent to Ankara to be counted along with the votes cast in Turkey on Aug. 10 — at which time an official figure for expat voting will become known. Expats may also cast their vote at any of the customs gates until election day, while entering or exiting Turkey. Isler emphasized that by the end of the process, he estimates about 17-18% of expats will have cast a ballot. Hence, it appears that 80% of Turkish expats are not all that affectionate about Erdogan. This is a “difficult pill to swallow” for the AKP elites. The dismal results are a disappointment for all parties and their leaders, but particularly for the ruling party.

Since early February, Al-Monitor has been reporting on Turkish Prime Minister Recep Tayyip Erdogan’s campaign trips to various European countries. Particularly in Germany, where about 1.4 million Turkish expat voters reside, and Austria, the AKP has worked diligently to rally Turkish expatriates. The other two presidential candidates — Ekmeleddin Ihsanoglu and Selahattin Demirtas — campaigned in Europe, too. Several Turkish media pundits called the preliminary results of the vote abroad “a total fiasco,” given the amount of effort and resources spent to urge expat voting. Why didn't more than 20% of Turkish expats turn out to vote? Considering the traditionally high levels of voter turnout in Turkey, how can the low voter turnout be explained?

The majority of those who did not vote deliberately opted out of the process. Their lack of will to vote can be summarized as rational ignorance and apathy. Most Turkish citizens residing abroad perceived it was not worth their time and effort to cast a ballot. Voting is mandatory for Turkish citizens residing in Turkey, but this is not the case for expats. Burak Cam, an IT professional with dual citizenship of Turkey and the Netherlands who lives in Amsterdam, told Al-Monitor, “I don't think my vote matters. During the March 30 municipal elections, I flew [to Turkey] just to cast my vote at the customs gate at Istanbul Ataturk Airport. Then I witnessed the poll monitoring process from different locations in Istanbul and I was distraught. My friends in Europe all harbor a deep mistrust against the system and fear election fraud in Turkey. Are these fair and transparent elections [compliant with] EU standards? Look at what happened in Germany; none of the CHP [Republican People's Party, the main opposition party] poll monitors were allowed to serve.”

Indeed, Cam summarized the common concern of many expats. In multiple locations, CHP poll monitors were rejected with the excuse that they did not have Turkish identity cards. When they asked how they could have gotten appointments to vote if they were not in the system, they got no reply. Nevertheless, hundreds of CHP applicants were turned down right before the voting started, particularly in Germany. There is no absentee ballot system or e-voting according to Turkish law, so one is required to appear in person to vote. Voting is supposed to be anonymous, but early voters in Europe and the United States reported that the envelopes they placed their votes in were transparent.

Cetin Amato, a member of the Gurbetin Oylari (Votes of Expats) Initiative — an initiative run by volunteers from 10 different countries to monitor the voting process — told Al-Monitor, “There were several mishaps on the organizational level. It is a constitutional right to have election observers, but we received complaints that some party members would not allow the observers access to several locations. Voters are concerned that their votes are not recorded in the locations they are cast, because they are transported and counted in Ankara. There was conflicting information about whether one was allowed to take one's cell phone into the booth, as some feared voters were coerced to take photos of their vote. In some locations we received reports of tension.”

Indeed, tension was particularly high when AKP’s Istanbul parliamentarian Metin Kulunk was seen almost as an active “poll worker.” Kulunk had made headlines after the Dec. 17 graft probe by introducing the concept of “freedom to sin” in Turkish politics while defending Erdogan.

CHP’s outspoken parliamentarian Umut Oran told Al-Monitor, “Kulunk went on the record to complain about consul generals in different cities for not accommodating AKP volunteers, and even went so far as to threaten them.” Several newspapers reported that Kulunk told Sule Ozkaya, Turkey’s consul general in Essen, Germany, “You will pay for this, you will be called back to Ankara.” Kulunk alleged that Ozkaya would not allow a disabled voter to cast a ballot. Ozkaya and other observers explained the rejected voter was mentally incapable of voting. Further allegations concerning irregularities during the voting process involve Turkish expats who attempted to vote but were told they had already cast a ballot. In other instances, there were allegations that special exceptions and accommodations were made for those who are obvious Erdogan supporters. These controversies and tensions are considered as a factor to deter voters from voting.

Retired diplomat and CHP’s Vice Chairman Faruk Logoglu told Al-Monitor, “The appointment system and the travel time required to vote were major causes of the low voter turnout. Also, timing is a concern as millions of expats are on vacation. Considerable numbers are expected to vote … at the customs gate.” Multiple instances of appointment problems were reported. In one case, 12 members of one family all were given appointments for different times. Hakan Kizil from Berlin told Al-Monitor, “Even the dentist is more accommodating.”

To complain about the system on state TV was not easy either. A TRT reporter was heard saying during interviews in New York, “Our channel would never broadcast these words.”

After the March 30 municipal elections, the world saw images of men and women asleep while holding bags filled with ballots — “to guard the votes.” The election campaign goes beyond mobilizing voters to turn out to vote, while observers must make sure fraud is kept to a minimum. At every level of the campaign process — which includes media appearances and campaign financing — we see that political competition in Turkey is no longer just between parties or candidates. In contemporary Turkish politics it is clear that the “state” with all of its resources backs the incumbent — sometimes to the point of “punishing” the other candidates. Although it is too early to elaborate on the voter turnout of Turkish expatriates, it is fair to say that 80% of expatriates have not been swayed to vote in the upcoming presidential elections.