The overwhelming popular support for the Lebanese military’s response to terror encroachment in Arsal suggests that the Lebanese public may yet believe in national unity. 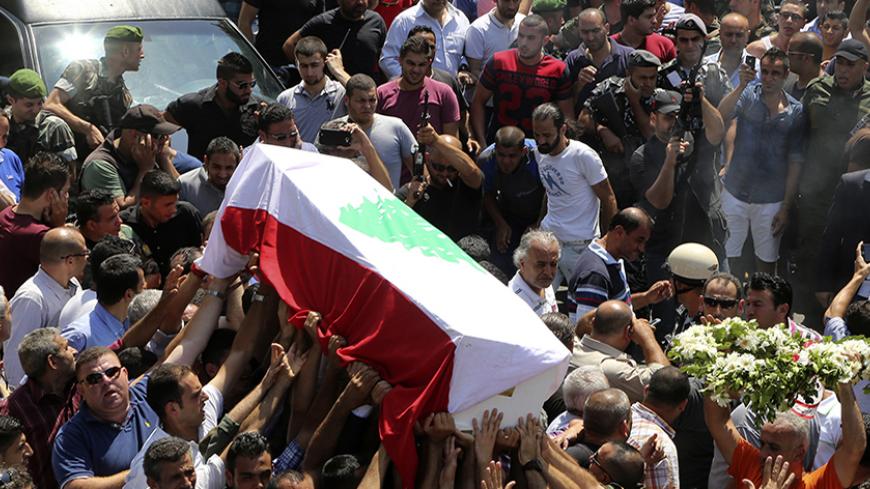 Men fire in the air as mourners carry the coffin of Lieutenant Colonel Nour Eddine al-Jamal, who was killed during Sunday's fighting between Lebanese army soldiers and Islamist militants in Arsal, during his funeral in Basta area in Beirut Aug. 4, 2014. - REUTERS/Sharif Karim

The frail political system in Lebanon has been jolted by the encroachment of terrorist groups in the Bekaa region, where the city of Arsal is located. The overall popular support for the Lebanese army shows a commitment that transcends the sectarian divide that has, among other things, prevented the election of a new president. The deployment of the Lebanese army into the Bekaa region was swift and decisive, and strongly backed by a near unanimous public.

Prime Minister of Lebanon Tammam Salam was firm that he would make no political deal with Jabhat al-Nusra and the Islamic State (IS). Salam continued, "The only solution proposed today is the withdrawal of the militants from Arsal and its environs." Salam said the militants sought “to move their sick practices to Lebanon,” adding, “We confirm that the attack to Lebanese national dignity will not go unpunished.” Fourteen Lebanese soldiers have been killed, 22 are missing and 86 have been injured in the fighting.

Security forces have arrested Islamist rebel commander Emad Jumaa. This development constitutes a serious challenge to the political system of Lebanon, which at this moment is responding in near unanimous support for the Lebanese army. It is expected to hasten the electing of a neutral statesmen who can guide policies that resolve issues such as the anxiety that kept tourists from many Arab states away, causing serious problems for the Lebanese economy.

The growing anxiety among the Lebanese points to an urgent need to enhance the capacities of the armed forces and transcend the factional partisanships that have disabled the election of a president. It is imperative that Lebanon remains what it has always been: a hub for educational excellence and cultural enlightenment with freedom of expression and a sophisticated and brilliant media, as well as an intelligentsia that has contributed to Arab renaissance and unity and can do so again.

What is taking place at this moment in Lebanon poses a serious and dangerous challenge. It is crucial that these differences be transcended so that Lebanon is able to withstand the current challenges of the Arab world in order to become a corrective force for the many wounds and flaws that have caused serious and at times tragic conflicts.

It is to be hoped that perceiving the potential dangers of the last two days in the Bekaa region will reinforce the Lebanese popular commitment to national unity, not only as a deterrent for terrorism but also in the interest of healing the wounds inflicted by sectarianism on the Lebanese people.