Moscow is continuing arms sales to Iraq and pursuing a policy that may allow it to weaken US influence in the country. 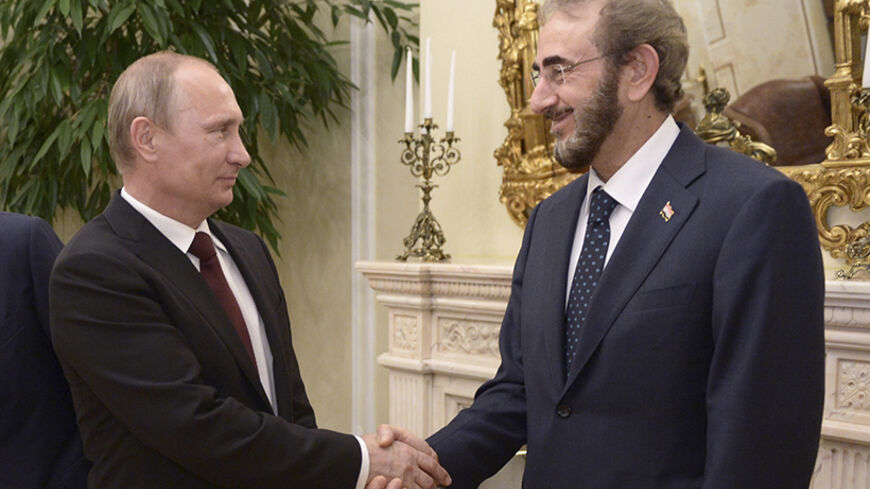 Russia’s military assistance to Iraq does not appear to be stopping at the sale of Su-25 fighter jets reported in June. Within a week after Russia’s Defense Minister Sergey Shoigu met with his Iraqi counterpart Saadun Al-Dulaimi and declared that improving relations with Baghdad was a “strategic priority,” the Russian newspaper Vedomosti reported over $1 billion in new arms deals, including mobile multiple rocket launchers, 152 mm howitzers and mortars.

Shoigu explained Russia’s support for Iraq in simple terms, saying, “We support your effort in fighting terrorism.” Indeed, from Shoigu’s perspective, this might be both a necessary and a sufficient reason to supply weapons to Iraq’s government as it combats the so-called Islamic State (IS) group. Nevertheless, Moscow may have grander aims — and the multiple opportunities inherent in Iraq’s violence and instability could hardly have come at a more convenient time for Russia’s government.

Consider: On the simplest level, Russia is earning $1 billion for its defense sector, something surely welcome as the United States, Europe and a few others impose escalating economic sanctions in connection with the crisis in Ukraine. At the same time, of course, Moscow is courting a disaffected US ally with which it enjoyed an enduring relationship in the past (even with the Sunni-dominated Baath regime). Given that Iraqi Prime Minister Nouri al-Maliki’s governing style causes less difficulty for the Kremlin than it does for the White House, Russian officials may have at least some reason to expect continuing US-Iraq tensions to facilitate this effort.

Looking at the wider region, Russia is demonstrating to other nervous regimes in the Middle East that it is able and willing to provide comparatively rapid arms shipments to governments facing internal threats without asking too many questions (that is, too many questions beyond “Will you be paying in cash?”). An IHS Jane’s report on the weapons sharply contrasted the relatively inexpensive and indiscriminate Russian weapons with more costly American precision systems. The report concentrates on the potential implications for Iraq’s counter-insurgency tactics, suggesting that Maliki’s forces will not be too worried about collateral damage, but there may also be international political consequences. Most notably, to what extent will the United States and other Western governments be prepared to support the Iraqi military if air strikes and shelling lead to significant civilian casualties? This may ultimately further highlight the contrast between Washington and Moscow.

Some might say that the Kremlin has little to prove after selling weapons to Syria’s President Bashar al-Assad for use in that country’s bloody civil war. Nevertheless, expanding what the Russians call “military-technical cooperation” with Iraq demonstrates two things: that Syria was not an isolated case arising from unique conditions and that current or past cooperation with Washington won’t be an obstacle for Moscow in evaluating prospective customers.

There are other regional aspects to Russia’s relations with Iraq. Most obviously and immediately, helping the Maliki government to defeat IS militants directly supports and complements Moscow’s policy in Syria; unlike the United States, Russia’s policy is consistent on both sides of the Iraq-Syria border (and therefore much simpler to execute). Moreover, intentionally or not, it could be a hedge — if Assad should eventually fall, Russia’s inroads in Iraq could become much more important. Likewise, if the nuclear negotiations with Iran should miraculously succeed and pave the way for a US/Western rapprochement with Tehran, Iraq could contribute to Plan B for Russia’s diplomacy.

Geopolitically, Russia’s growing arms sales to the Iraqi government can also have some impact — though the deals are still modest and should not be overstated. On one hand, the moves clearly show that Russia can still be a player internationally and in the Middle East, even during its difficult confrontation with the United States over Ukraine. On the other hand, the deals allow Moscow to compete directly with the United States in a way that Washington can’t really complain about so long as it remains committed to preventing the collapse of Iraq’s government.

How much of this has Russia’s President Vladimir Putin considered or planned for as part of a comprehensive Middle East strategy? It’s impossible to say. In fact, it is feasible that the Kremlin’s initial decision-making on Iraq was entirely tactical and opportunistic — driven by little more than the desire to stop Islamist insurgents, make some money and show up the United States. For all that has been written about Putin as a strategic mastermind, his choices in Ukraine have been strikingly shortsighted in many respects. After all, he now faces a choice between escalating costly tension that could lead to a serious conflict and a domestically damaging retreat that might not actually spare Russia further Western economic sanctions or other pressure (including long-term NATO moves to contain or constrain the country).

As a result, while Russia appears well positioned to seek further advantage in Iraq, its ability to succeed over time is unclear.