Moscow has seized an opening by delivering fighter jets to Iraq. 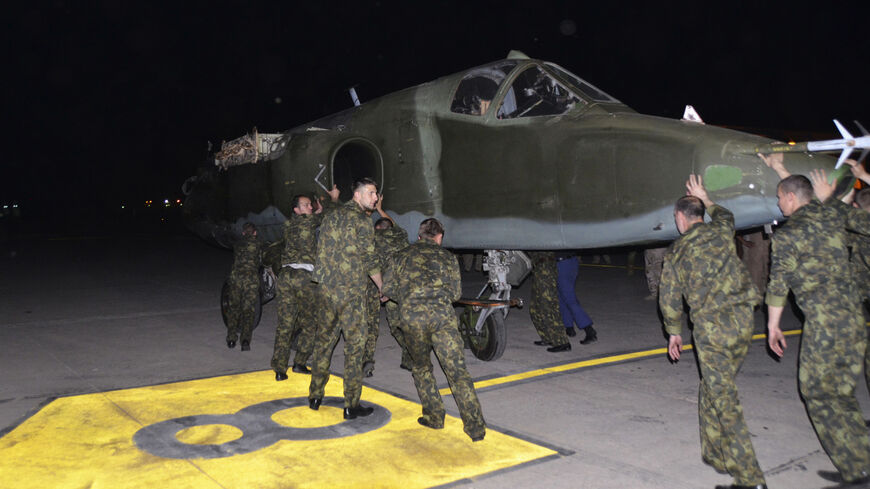 Thus far, Iraq’s rapid unraveling has not been a major concern for Moscow. The situation in the country rarely features prominently in Russian news reporting — where Ukraine and Russian domestic matters dominate — and does not appear to be a top priority for senior Russian officials, though Russian President Vladimir Putin did recently express “full support” for Iraqi Prime Minister Nouri al-Maliki’s efforts to combat militants driving the Iraqi military from cities and towns in northern and western Iraq. Notwithstanding some important interests in Iraq and the Middle East, Russia’s government is unlikely to get too involved there.

Broadly speaking, as Fyodor Lukyanov has written in Al-Monitor, developments in Iraq have served primarily to confirm pre-existing views in Russia. This has multiple components. First, with respect to the United States, the new crisis has been an I-told-you-so moment — demonstrated by Russian Foreign Minister Sergey Lavrov’s reminder of Moscow’s frequent assertions at the time of the US invasion that “the adventurism the Americans and the British started there would not end well.” This has been a regular refrain for Russian officials and commentators during every reversal since 2003.

Second, the new crisis in Iraq aligns with Moscow’s view that it was a mistake for the United States to prolong Syria’s civil war by aiding Syria’s rebels, however weakly, rather than supporting or at least tolerating Syrian President Bashar al-Assad’s efforts to crush the Islamist groups trying to oust his regime and now Iraq’s, too. Here, Russia’s complaints focus not only on the United States and other Western nations, however; Syria’s spillover into Iraq reinforces the widespread Russian sense that in acting as patrons of Sunni Islamist militants in Syria and elsewhere, Saudi Arabia and Qatar are up to no good.

What the Kremlin is actually prepared to do about the instability in Iraq is less clear. Russia certainly favors stability in Iraq over chaos and prefers Maliki to the Islamic State of Iraq and al-Sham (ISIS); perhaps ironically, Russia has won a more significant role in Iraq’s oil sector than many Russian officials likely expected a decade ago, including in the huge West Qurna-2 oil field. Nevertheless, it bears remembering that for all Putin’s and Lavrov’s criticism of the George W. Bush administration’s decision to go to war in Iraq, Russia did not make it a major issue in US-Russia relations at the time. More important, Russia did not create problems for the United States in Iraq during the invasion or the long US occupation of the country.

Still, Russia has reportedly sold a dozen Soviet-era Su-25 fighter jets to Iraq that could help in attacking the militants. Some of the planes have already been delivered — though apparently in pieces, since they arrived in cargo planes with Russian experts, who are likely necessary to make them flight-ready. In a rebuke to the United States, Maliki has grumbled that Iraq had been “deluded” by the “long-winded” process required to buy US warplanes and argued that if Baghdad had earlier purchased Russian, British or French jets it might have averted the current crisis. He expressed hope that “God willing within one week this force will be effective and will destroy the terrorists’ dens.” While Iraqi pilots have already had some experience with the Su-25 and should be able to take to the skies quickly, Maliki may be somewhat overoptimistic about their impact.

The Russian aircraft sale essentially represents the continuation of Moscow’s policy in Syria on the other side of the Syria-Iraq border — though interestingly, State Department spokeswoman Marie Harf bent over backward to avoid criticizing the deal when questioned on the matter at some length during a June 27 daily press briefing. Harf said, “We don’t oppose legal Iraqi efforts to meet their urgent military requirements,” and “We share a goal here of helping them fight this threat” — before acknowledging that US F-16 deliveries could face further delays.

Nevertheless, Russia appears unlikely to do much beyond selling weapons to Iraq’s government; unlike in Syria, the broad alignment of US and Russian objectives makes Kremlin diplomatic support unnecessary. Moscow’s relatively limited role reflects both its limited tools, especially during a simultaneous and, for Russia, far more important crisis in Ukraine, as well as a reluctance to get too deeply involved — probably in no small part due to a perceived risk of blowback into Russia itself. A senior Kremlin official expressed precisely this concern to me and a small group of colleagues in 2003 when explaining Russia’s unwillingness to support the US invasion. Given the key role that Chechen fighters appear to be playing in the Iraqi and Syrian insurgencies, it would be hard for Moscow to ignore this possibility today.

More fundamentally, however, Russia’s foreign policy in the Middle East remains largely defensive even two decades since its post-Soviet independence. Despite Russia’s significant security, economic and political interests in the broader Middle East — a region that touches Russia’s periphery — Moscow’s posture has rarely gone beyond protecting its security interests and asserting a geopolitical role while seeking to expand its commercial ties.

Taking into account that Russia’s economic interests in the Middle East remain quite small compared with its other two neighboring regions, Europe and Asia, and that instability in places like Iraq or Syria has indirect security consequences for Russia rather than direct ones, the Kremlin’s geopolitical aims may in some respect be the most important of the three: Influence beyond its immediate neighborhood is essential to Russia’s claim to global great power status. From this perspective, the Middle East offers far more opportunities than Europe, Asia or the Western hemisphere, which are the home regions of other key powers, and also more than Africa, where Russia has less at stake. Fortunately for Russia, the combination of arms sales, a UN Security Council veto and active diplomacy is probably enough to meet its needs.