President Hassan Rouhani has lashed out at critics of the nuclear negotiations, calling them "timid and cowardly." 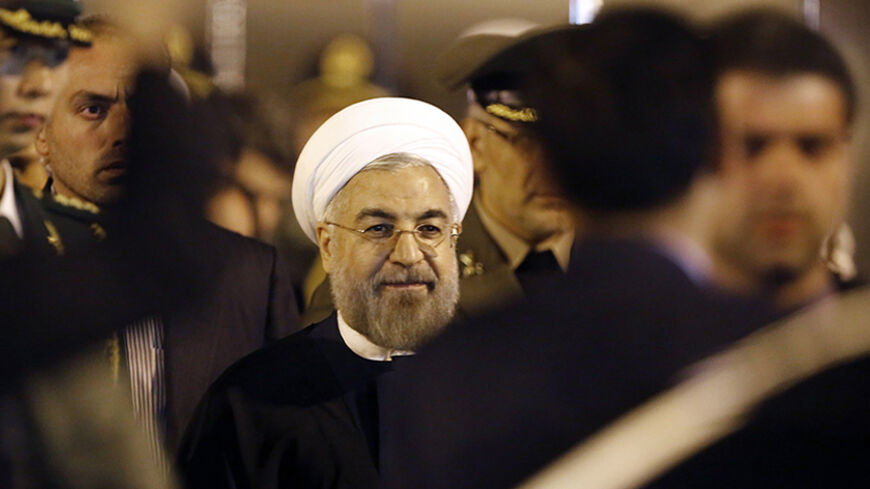 At a meeting of Iran’s ambassadors, President Hassan Rouhani defended his administration’s performance on the nuclear negotiations, using harsh language to remind critics of the nuclear deal that his administration has the support of the different branches of government and Supreme Leader Ayatollah Ali Khamenei, who has the final say in the negotiations between Iran and the five permanent members of the UN Security Council plus Germany (P5+1).

Fars News reported that in response to criticism over some Iranian officials appearing to get close to Western officials, Rouhani said, “Some who are politically timid and cowardly do not have confidence and they assume everyone is like them.” He said, “Whenever negotiations start, they say that they are shaking — To hell, go and find a warm place for yourself.

“The administration has done something big,” Rouhani said. “One of these examples is the Geneva agreement and if some are not thankful for these efforts, sooner or later they will be and history will have its own judgment.”

Rouhani said that the nuclear issue, which afflicted Iran with a number of sanctions, is in reality “an artificial crisis,” and that Iran is “not in a hurry in the nuclear discussions, but we do not see a delay as advisable.

“The foundations of sanctions have broken and I have no doubt in this and we should know that the previous situation will not return,” he said. “In the negotiations with the P5+1, we are in the process of breaking the sanctions, and they know how we break the sanctions.

“We know the sanctions to be oppressive and inhumane and we told them that your sanctions were wrong and inhumane,” Rouhani said. “You sanctioned our medicine, and this will remain in history.” While the various United States and UN Security Council resolutions against Iran did not target medicine specifically, sanctions against Iranian banks and the transfer of money created obstacles in obtaining medicine from foreign markets.

Rouhani also that after a final nuclear deal is reached, the P5+1 countries will say, “We stopped Iran from making a nuclear bomb.” But he compared Iran to Israel, which, according to Rouhani, after the recent Gaza war and the destruction and death it inflicted on Gaza, “made clear which country is after weapons of mass destruction and which is not.” He also attributed to social media the change in public opinion against Israel.

In regard to the nuclear inspection body, the International Atomic Energy Agency, which reports to the UN, Rouhani said, “Whether the agency is there or not, the Islamic Republic has not, is not and will not be after weapons of mass [destruction].”

Rouhani said, “The other branches of government are also with us and all of us are next to the guidance of the supreme leader and we are a single unit in the country and we will not give permission for anyone to create differences between the branches of the government and, God forbid — God be praised this doesn’t exist — that there would be an insult to the supreme leader.”