Since the Arsal battle, Lebanon has been taking a new look at its Syrian refugee crisis, which it has been struggling with for years. 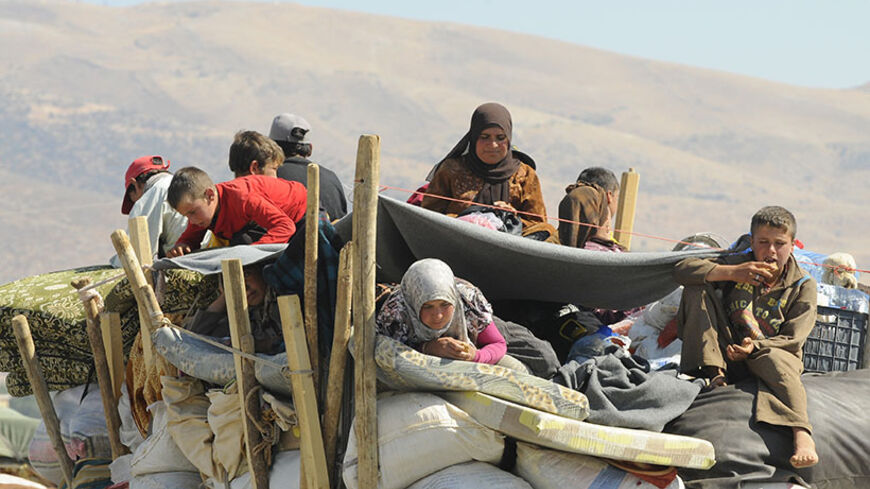 Syrian refugees, fleeing the fighting in Arsal, wait with their belongings in Majdel Anjar in the Bekaa Valley, near the Lebanese border with Syria, Aug. 8, 2014. - REUTERS/Hassan Abdallah

The importance of the Syrian refugee issue remained of utmost importance throughout the past three years, despite the plethora of serious Lebanese political, economic and social dossiers. But the latest incidents in Arsal pushed the matter to the forefront, giving it the impetus it lacked as a result of the Lebanese government’s lack of a unified stance toward the Syrian crisis.

Will the Arsal developments push Lebanese authorities to take exceptional steps and measures, now that all the parties have sensed the gravity of the “chaotic exodus”? And, what are the feasible solutions that have been proposed now that the Arsal events have clearly shown that a large number of gunmen originated from Bekaa Valley refugee camps, particularly those around Arsal?

The latest figures published by the Office of the UN High Commissioner for Refugees in early July indicate that the number of Syrian refugees in Lebanon exceeds 1.1 million people; unofficial figures point to there being more than 1.5 million refugees, since a large portion are not registered. This means that the proportion of refugees has surpassed 35% of the total Lebanese population. It should be noted that displaced Syrians in Turkey, for example, amount to 4% of the country’s population; in Jordan, this figure is 18.5%.

Remarkably, from a geographic viewpoint, the largest number of refugee centers are in areas sympathetic to the Syrian opposition, among them Arsal, which formed an environment that facilitated their movement and provided them with services and protection. According to security sources, this reality on the ground encouraged a considerable number of Syrians to seek refuge in Lebanon after being wounded in fighting inside Syria. It also engendered an amenable environment for crimes such as kidnapping, robbery and drug trafficking, culminating in car bombing attacks and murder.

According to the same sources, an internal daily incident report issued by one of the security apparatuses indicated that Syrians are involved in four of every five security incidents in Lebanon, either on an individual basis, or in association with other nationalities.

The Lebanese scene witnessed the emergence of different opinions vis-à-vis the issue of refugees. This said, Lebanese officials, especially Foreign Minister Gebran Bassil, spared no effort in Arab and international forums in calling in his speeches for Lebanon to receive help to deal with this issue and in warning against the refugee situation's security repercussions in particular, while affirming that the danger threatens Lebanon and its various constituencies. In his latest speech, a series of solutions was proposed based on the following steps:

The internal political division prevented the establishment of an official framework — except a humanitarian one — to deal with the refugee issue. In addition, Lebanese authorities underestimated the extent of the Syrian exodus to the country, because some officials believed that the the crisis would not last long and the number of refugees would remain manageable. In this context, parliamentary circles do not expect that this issue will undergo a qualitative breakthrough, despite that it has been an item for discussion in all cabinet and official meetings, and that a special ministerial committee was formed to deal with the matter.

While the same sources stressed the need for Lebanon to coordinate its efforts with Syria, they revealed that the Lebanese government was resorting to the Arab League and Security Council, and was planning to discuss the issue with influential countries able to help Lebanon.

“From the very beginning, Lebanon erred in dealing with this dossier, which is now impossible to solve even if a consensus [on this refugee issue] was achieved among all Lebanese,” said an official, who said Lebanese authorities could only resort to preventive internal measures. The same official suggested that, at the very least, an accurate census must be performed of Syrian refugees throughout Lebanese territories, and records must be unified among local, municipal, security and UNHCR authorities in order to determine their true numbers.

All that remains now is for people to wait and see how much cooperation Syria, influential countries, and the UN are willing to give Lebanon to help it and prevent the occurrence, in other regions, of incidents similar to those that shook Arsal.