Iran has provided the Kurdistan Regional Government of Iraq with arms to fight the Islamic State but is wary of alienating Baghdad. 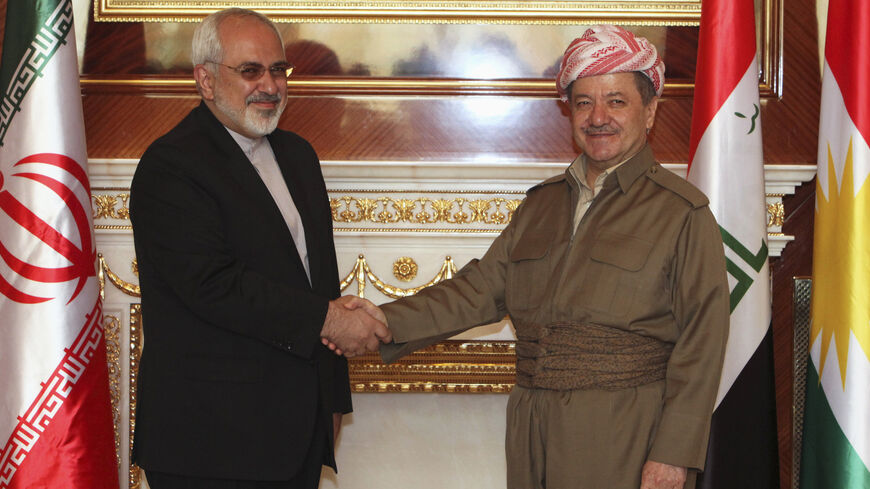 The Kurdish dream was never as close to reality as it was in July when the Islamic State of Iraq and al-Sham (now the Islamic State, or IS) invaded the Iraqi city of Mosul. The vulnerability of the Iraqi state was at its peak and Kurds made rapid moves to secure control over disputed areas in Kirkuk. Iraqi Kurdistan’s leader Massoud Barzani called for an independence referendum, and the long-awaited Republic of Kurdistan appeared closer to reality than ever before.

Developments later on, mainly the failed IS attempt to take Erbil, gave the Kurdish leaders a wake-up call; had it not been for Iran and the United States, the semi-autonomous region could have become an occupied land. The United States provided aerial cover, hitting IS posts, while Iran provided the Iraqi Kurdish forces with arms and ammunition. “We asked for weapons and Iran was the first country to provide us with weapons and ammunition," Barzani said at a joint news conference Aug. 26 with Iranian Foreign Minister Mohammad Javad Zarif in Erbil, capital of Iraq's Kurdish region.

Zarif’s visit was aimed at boosting ties with Erbil, an Iranian official said in a phone interview with Al-Monitor. “Today, there’s an imminent need for cooperation in the region. There might be a lot of differences on ‘X’ or ‘Y’ but this shouldn’t affect our fight against extremism and terrorism; it’s an existential fight,” he said. The official, who spoke on condition of anonymity, said that Kurdistan is a main part of Iraq's diversity and that Iran believes the Kurds can play a great role in the stability of their country. He added, “The Islamic State wants the region divided and the best way to face it will be by getting together.”

Is Iran looking forward to strategic ties with Iraqi Kurdistan? I asked another official who stated clearly that Iran keeps in mind that Kurdistan is part of Iraq, and that therefore: “Relations with Iraq will always be our priority; relations with Iraqi Kurdistan are strategic but not to be compared with Baghdad.” Still, there are other factors that don't get much publicity. Iran’s rapid move toward Erbil is aimed at opening a strong channel with the Kurds, who are in need and vulnerable to any foreign approach. An Iraqi diplomatic source told Al-Monitor, “Tehran well knows that Kurdistan is on good terms with Israel, the United States and Turkey; at least two of the three pose a strategic threat to Iran.” The source added, “Kurdistan’s leader spoke about independence, and Iran is concerned about this. It is seriously concerned because this might have an impact on Iran’s Kurdistan region; therefore they want to make sure everything is under control.”

Since IS' invasion of Mosul, several moves by Kurdish and Iranian officials have given hints about where the relations are heading. Iraqi Kurdistan’s Prime Minister Nechirvan Barzani visited Tehran and met Iran's national security secretary, Ali Shamkhani, said to be overseeing Iran’s policy in Iraq nowadays. On Aug. 11, Iranian media put the spotlight on a letter from Barzani to Iranian President Hassan Rouhani praising Iran for “supporting Iraqi Kurds under the current tough circumstances.” Barzani thanked the Islamic Republic for throwing its weight behind Iraqi Kurds in the face of the ongoing crisis, and added that “friendly relations and mutual Tehran-Erbil cooperation will definitely consolidate peaceful coexistence between neighboring Iranian and Kurdish people.”

Because Iran’s western borders are under the direct threat of IS, the country hopes to help its neighbors develop the capability to stop the extremist group from reaching Iranian border points. This could prevent Iran from having to wade into a war of attrition; a fight with IS can’t be compared with any other war fought by the Iranians within their borders. There’s another threat that Iran might also be seeking to prevent: the Kurdish Salafists inside Iran.

Media reports root the Salafi presence in Kurdistan to 2003, after the US invasion of Iraq and its crackdown on Ansar al-Islam. A decade later, these groups are very active in several Iranian cities and were able, until the year 2012, to recruit fighters to go to Iraq and Syria. In a report published by Peyamner news agency in April 2012, activists and politicians in Iranian Kurdistan warned of the threat these groups pose to the society there. Kawa Bahrami, director of the political commission of the Kurdistan Democratic Party in Iran (KDPI), said then that the Islamists run recruitment and training courses for young people willing to join their fight. He added, “They also give military training to recruits at special bases; last year, they had a training camp near Jwanro where they were openly teaching young Kurds how to carry out suicide missions and other terrorist acts.”

This threat is left to Iran to deal with on its own, because relations between Iraqi Kurdistan and Iranian Kurds are not at their best; still, Kurdistan can help by helping secure the border and not allowing the trafficking of arms and the crossing of militants.