Israelis near Gaza again feel abandoned by their government

Despite evacuation plans elaborated two years ago, Israel has not decided to evacuate the residents near Gaza, who have come to feel that no one in the government assumes responsibility for their safety, while the government allocated huge resources for the West Bank settlers. 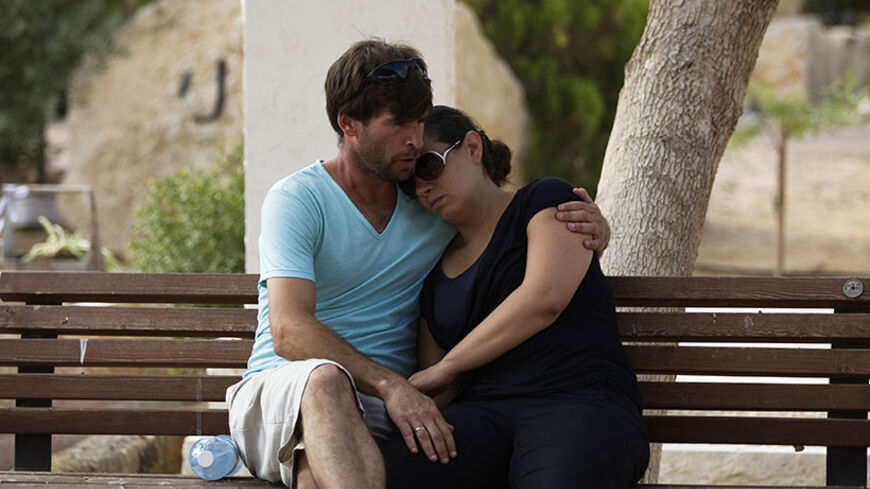 The parents of a 4-year-old Israeli boy killed by a mortar attack from Gaza sit on a bench before his funeral in Yevul, near the border with the Gaza Strip, Aug. 24, 2014. - REUTERS/Ronen Zvulun

In the early days of Operation Protective Edge, representatives of the Finance Ministry approached the Center for Regional Councils and asked how much it would cost to evacuate approximately 3,000 people who live in near-Gaza communities, along the border with the Gaza Strip. These communities, mainly kibbutzim, are euphemistically called “mortar communities.” In less polite terms, they are cannon fodder for the campaign in Gaza.

Unlike towns and villages in the center of the country, which receive a 60- to 90-second warning before incoming rocket fire, these communities get just 15 seconds at best from the moment the siren goes off until a mortar shell lands. In the worst case, they barely get three seconds.

As chairman of the Center for Regional Councils, Shmuel Rifman wasted no time. He immediately ordered the creation of a team to quickly estimate the cost of evacuating the residents from the region for a period of about one month. He then presented the Finance Ministry with a document that estimated the cost at 20 million shekels (about $5.7 million).

Ostensibly, the Finance Ministry’s request seems to indicate that the government was acting responsibly and in an orderly manner, taking the impact of a drawn-out campaign into account, along with the need to ensure the safety of civilians living in immediate danger. What actually happened in Operation Protective Edge is the exact opposite. It is unclear what the fate of this document was, but regardless, the government never intended to cover the entire amount given by Rifman. Furthermore, from the first day of the fighting, when an endless barrage of mortar shells landed on kibbutzim along the border fence and turned them into a full-fledged battlefield with its own dead and wounded, Israel’s leaders simply detached themselves from the problem. Even if it never said so explicitly, the message implied in the government’s actions was that responsibility for the safety of those civilians under fire lies exclusively with those civilians themselves.

Prime Minister Benjamin Netanyahu and Defense Minister Moshe Ya’alon, the architects of the Gaza campaign, didn’t do a thing. They didn’t want to grant Hamas an “achievement” in the form of the organized “abandonment” of these communities. This is an old-fashioned way of thinking. No one in the international community calls the border between Israel and Gaza into question, and no one would challenge it even if there was a temporary evacuation. What is even more serious and more disconcerting, however, is that neither Netanyahu nor Ya’alon correctly assessed how long this war would take. Nor did they properly assess the intentions and capabilities of Hamas.

One of the biggest embarrassments of this campaign, and one that will long be remembered, was the inept “Anemone Speech” that chief of staff Benny Gantz delivered on Aug. 10, during one of the first cease-fires. Confident that the cease-fire would last a long time, Gantz called on local residents to return to their homes and work their land. They did return, only to discover that the mortar shells hadn’t stopped falling.

The Iron Dome air defense system, which protects most Israeli citizens, is ineffective in response to mortar fire against communities along the Gaza border. In fact, no technological response to these attacks has been found to date, apart from more and more protective shielding. The consequence is that people suffer from anxiety whenever they leave their protected homes. The obvious conclusion should be that if the state cannot defend these people in wartime, all women and children should be evacuated from the field of fire, along with everyone else who doesn’t absolutely need to be there.

By way of comparison, just one day before the 1973 Yom Kippur War, the country’s defense leadership decided on the immediate and quick evacuation of all women and children from the kibbutzim on the Golan Heights. Some 750 of them were put on buses and transported to neighboring kibbutzim in an organized manner. That was the right decision, given the enormous failure of that war. Some 3,000 people live in communities up to 4 kilometers (2.5 miles) from the Gaza border. It would not be that complicated an evacuation, nor would it be that expensive, either. One thing, however, is certain. If such an evacuation had been conducted, it would have prevented the tragic and unnecessary death of 4-year-old Daniel Tragerman at his home in Nahal Oz. As we all learned yet again, three seconds is not enough time to get three young children into a protected space.

The Tragerman family took the initiative by leaving the kibbutz at the start of the campaign and relocating to the grandparents’ home in the center of the country. They returned to their home for a few days. They were fed up with their nomadic existence and wanted to go back to someplace familiar. A short while after, Daniel’s parents, Gila and Doron, realized that they would have to leave again to ensure the safety of their children since the fire kept going, not letting off their community. Their suitcases were already packed. Grandma and grandpa waited eagerly for this chance to see their beloved grandchildren again. But the mortar shell landed before they could leave, destroying their lives.

Like all families living in the communities surrounding Gaza, the Tragermans waited in vain for weeks, hoping to hear the country’s leaders make an explicit statement about their situation. During this time the security Cabinet convened for almost 30 separate meetings. Its members bickered frequently and wasted time on their clashes of ego and unnecessary politicking. On the other hand, no one banged on the table and demanded that the prime minister and the defense minister initiate the evacuation of the local residents from the field of fire.

This farce is increasingly seen as one of the most significant failures of the current war in Gaza, and in fact, no less a fiasco than the tunnels. What is even more infuriating, however, is knowing that back in 2012, a plan called “Guests' Hotel” was prepared by the Home Defense Front Ministry under its minister, Matan Vilnai, to evacuate communities in an emergency situation. According to the plan, the state would pay for and evacuate communities within the immediate range of danger, and relocate the population in various absorption facilities, including schools, public institutions, dormitories and caravans, at the government’s discretion.

And as if all the government’s spluttering wasn’t enough, at the very height of the war in the south, while people from communities surrounding Gaza wandered like nomads between the homes of friends and relatives because the government had abandoned them, the Knesset’s Finance Committee, headed by Nissan Slomiansky of the HaBayit HaYehudi Party, approved 20 million shekels for social well-being in West Bank settlements instead. It was exactly the same amount of money that Rifman calculated would provide security for the people who really needed it. Unfortunately for the people who live near Gaza, they don’t have the same militant lobby that the settlers have in the government and the Knesset.