Turkey has suffered unexpected declines in its exports to Iraq, Libya, Egypt, Ukraine and Russia, though Turkish exports to Russia may have more potential following its recent foodstuff import boycott of the United States and European Union. 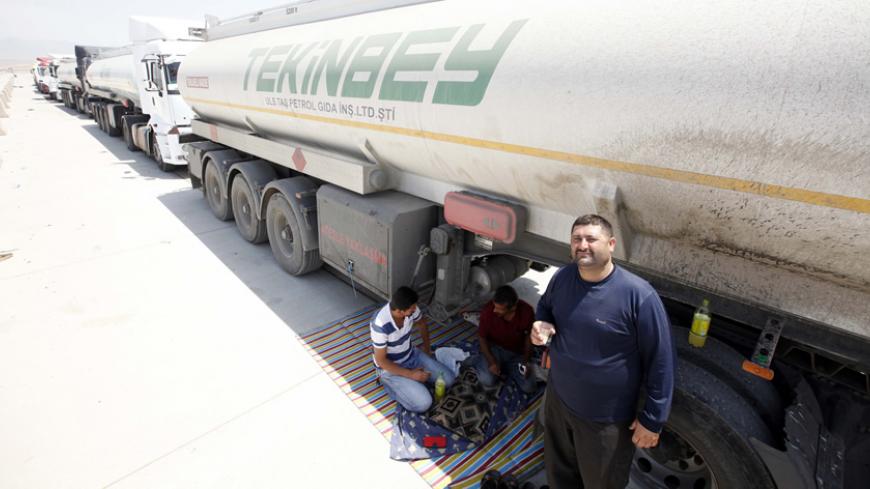 Drivers wait next to their tankers at Turkey's Habur border gate to Iraq, July 6, 2014. Chaos in Iraq has brought one of Turkey's key trade routes to a virtual halt. - REUTERS/Osman Orsal

The latest developments in countries near Turkey have started affecting its exports. The exports that grew in the first half of the year because of higher demand in Europe remained static in July at $12.5 billion.

Economic officials had been forecasting a continuing rise in exports because of increased European demand, and thus the unexpected slowdown came as a shock. While the disappointing export figures could be partly blamed on the Eid holidays and other extenuating circumstances, the continuing losses in markets of countries such as Iraq is causing concern. In June, exports to Iraq declined 29.1%, and fell an unexpected 46.4% in July. Last year, after Germany, Iraq was Turkey’s second-most lucrative export market. In July, Iraq was in fifth place.

The major cause of the decline in exports to Iraq is the advance of the Islamic State (IS). Turkey, as a consequence of the Islamic State's capture of Mosul, is having severe problems reaching the south of Iraq. As it is much costlier to reach the south through alternative routes — for instance, Iran — exporters avoid these. There is also a decline in overall demand, and there are reports that countries such as Iran are expanding their sales to Iraq, at Turkey's expense.

Turkey also sustained a 37.2% loss in the Libyan market because of the unstable situation there. In July 2013, the volume of exports to Libya was $210.1 million. This year, that has gone down to $131.9 million.

As for the effect of the tension between Russia and Ukraine, in July, Turkish exports to Russia decreased by 12.6% and to Ukraine by 24.5%. In July 2013, exports to Russia reached $613.3 million, while by the end of July this year it went down to $536 million.

Thus, the decline in aggregate exports to these five countries in the 12-month period from July 2013 was more than $731 million. Turkish exporters, however, believe the regression in these important export markets will be temporary.

Russia is the sixth-largest market for Turkish exports. In the first seven months of 2014, Turkey lost about 12% of that market. The main exporter to Russia is Turkey’s automotive sector, which registered a decline of 39%; textile exports decreased by $20.9 million.

Increases in exports to Syria and Palestine

The biggest surprise of July was Syria. Exports to Syria that were down by 1.2% in June boomed by 64% in July. This most welcome increase revitalized the economy of Hatay province, which saw a 33% increase in exports. Exports to Palestine went up by 17% in July.

Although exports to Iraq saw the greatest losses in terms of percentage in July, it is only the fifth-largest export destination with $569.5 million.

Are monthly exports of $15 billion attainable?

The Turkish government aims at a total of $166 billion of exports this year. The total reached by the end of July was $92.7 billion.

To reach this target, Turkey needs to export $74 billion more by the end of the year. This should be possible if the $12.5 billion performance of July can be topped for August through December. To ensure that other economic data are not negatively affected, Turkey will have to export at least $15 billion every month going forward.

Will IS gains threaten exports to Iraqi Kurdistan?

Recent territorial gains by IS and the proximity of the battles to the Kurdistan Region's capital, Erbil, could deliver a fatal blow to Turkish exports to Iraqi Kurdistan, the most lucrative market for Turkish exports in Iraq, where hundreds of Turkish companies operate.

But there is also one potentially profitable development for Turkish exporters. With Russia having decided to boycott foodstuff imports from the United States and the European Union, Turkey could well be Russia’s alternative source.